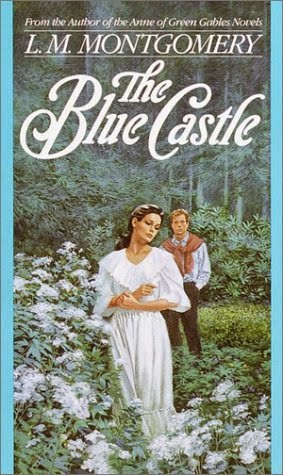 This book is odd.  Not in a bad way, necessarily, but still odd.  When I first bought it, I skimmed through it and didn't find it that interesting.  But a while ago, being sick and rather bored, I picked it up again and discovered that it's a perfect sick-day read.

Which is strange, since it's not a very happy story, and not even one of my favorites at that.  Definitely the grimmest L.M. Montgomery story premise I've read, the novel starts out "drab and colorless," with the account of Valancy Stirling's woes.

Now, frankly, I wasn't crazy about Valancy.  I felt she wallowed in self-pity too much and was downright rude when she decided to "break free."  Admittedly, her family was oppressive and clearly messed up in many ways, but that didn't excuse some of her remarks.  I mean, honestly, telling an aunt that you can give her the address of a beauty parlor that could reduce the number of her chins?  That's just cruel.  And yes, her family had been unkind to her as well, but it didn't seem like they were trying to be wantonly cruel, which Valancy certainly was.  Aside from that, she held grudges in the most appalling manner.  But on the other hand, Valancy was a good protagonist because she reminds me of how I can be myself.  To paraphrase someone I heard somewhere, we have loads of patience for ourselves and our shortcomings, but we have precious little for the same shortcomings in someone else.  So, no, I didn't like Valancy very much, but she is a very human character.  She's also somewhat inspiring, because, if you tone back a LOT on her choices, she can encourage you to not be constantly worrying what people will think of you if you're honest with them.  Which can be good.  So, yeah... :)

Now, as to her family...truthfully, I rather enjoyed them;)  They were just funny!  Hideously messed up and priggish, but funny.  "'Let us be calm...let us be perfectly calm.'"

Moving on to Barney.  He was…ehh.  Didn't hate him, didn't love him.  He seemed too…I don't recall.  Self-centered?  Careless?  Whatever;)

While there were cons to the books, there were also some major pros.  Even though I didn't care for the characters very much, the storyline was original and interesting.  And then, of course, there was L. M. Montgomery's signature style of writing, with her passionate and romantic descriptions of nature, as usual.

So, in a nutshell review, not my favorite book, but extremely interesting, and very well-written:D