[Note:  Keep in mind that this review is written from the perspective of someone who has never actually read Romeo and Juliet, m'kay?:)  Also, there'll be spoilers, because, I mean…all things considered, you probably know how it all ends.]

I first became seriously interested in watching this movie a) because of the utter gorgeousness of all the stills I saw on the Internet, and b) because it has Hailee Steinfeld.  I'd only seen her in True Grit (2011), but, I thought, wouldn't it be cool to see her in a completely different role?

So, yesterday, I watched it.  And…I'm not quite sure what I think of it.

First things first.  This movie was beautiful.  It was one of those films where you think, "I want just about this entire movie in screencaps."  The cinematography was excellent.  The lighting, the camera angles, the costumes and sets…aaaaaaahhhhh. 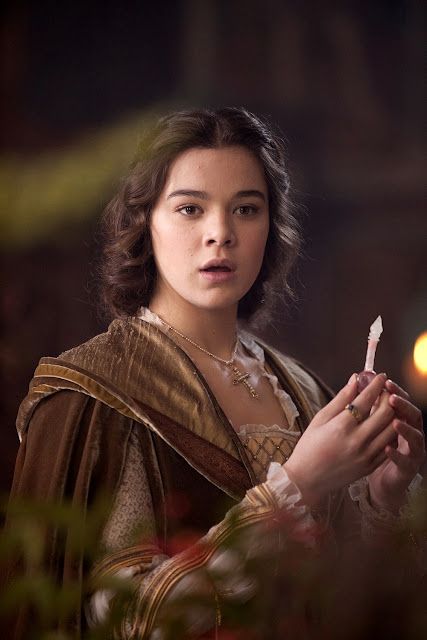 See what I mean??

Hailee Steinfeld was absolutely precious as Juliet Capulet.  I think she perhaps delivered the most solid performance, followed by Paul Giamatti as Friar Lawrence or Ed Westwick as Tybalt.  But I'm not sure;)

Her Juliet was impetuous and and not-the-wisest, certainly, but, given that those are just characteristics of Juliet herself *ahem*, I think Hailee Steinfeld also brought out at least a modicum of maturity, and gave the impression of a sweet, agreeable, and loving personality.  I liked that they showed how she did genuinely care about other people besides Romeo (such as her nurse, her parents, even Tybalt)…just not enough to keep her from saying that she'd rather have all of them dead than her Romeo banished, or from blowing off the fact that her husband killed her cousin about a half hour after their marriage.  I also appreciated that she had at least a measure of common sense enough to make her stop and question, "Do we move too fast?", albeit that she did drop that little inkling of concern the moment her dashing lover waved it away.  At which point, by the by, you wanted to scream at them both, "YES!  YES, YOU ARE!  STOP AND THINK!"  But such an irregular display whilst in front of a computer is liable to incite speculation in one's family, and so I thought it best to refrain;) 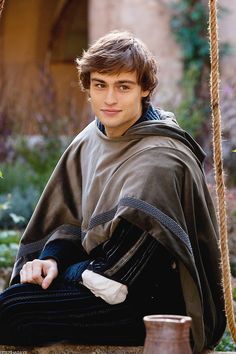 Douglas Booth's Romeo was a little, um…ditzy.  I really don't know how else to describe it.  As the lovelorn Romeo, I guess the complexity level of his performance wasn't exactly supposed to be through the roof, but still.  He was nice, don't get me wrong, but he was also, ya know…Romeo.

…Okay, okay, I suppose that isn't all that fair.  The boy was sweet, and loyal, and did have a peacemaker's heart, I think.  He did try to stop the feuding, and he did attempt to refrain from fighting Tybalt and Paris at first.  But he was also a little inconstant, shall we say.  One moment fawning over Rosaline; the next moment, upon sighting Juliet, swearing that his love for the latter is deep as deep can be, pure, undying, eternal, blah-de-dah-de-dah.  In all fairness, though, Juliet was looking particularly lovely in her masked ba--except it wasn't a ball, was it?  It was a feast.  Juliet was looking particularly lovely in her masked feast outfit.  Behold: 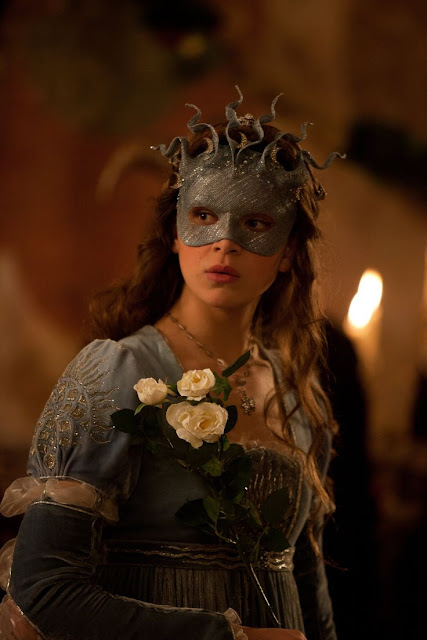 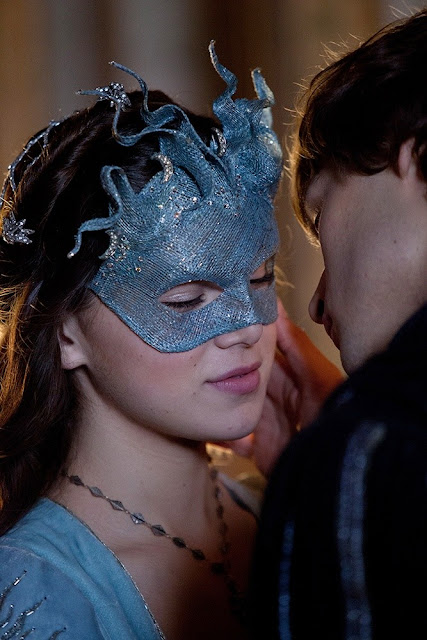 (You can't see it very well, but her hair is absolutely GORGEOUS from the back.  There's this beautiful little coronet/cap/thing…)

…I WANT ALL OF HER OUTFITS, OKAY?!  You have to watch the movie to fully understand.  They are simply stunning.  All of them.  Even her nightdress.

Speaking of the nightdress *ahem*, let's move on to content, yes?

This movie is actually quite clean.  There is one sex scene, but it takes place after they are married, and it was very easy to skip, as it's fairly obvious when it's coming, and they give you time to hit the handy little fast-forward button.  From what I read, there also isn't really any nudity in that scene, except for Romeo's bare chest (which you'd already seen earlier in the movie).  But anyway.  There are also allusions to said wedding night, but nothing crass.  Apart from any sensuality, there are a number of sword fights, including some deaths whereat we see a fair amount of blood, but not really in a gory fashion.  And then, of course, assuming you know how the story of Romeo and Juliet ends, you know that there are two other deaths, as well, which aren't exactly bloody, but still disturbing.  More on that later.

The supporting cast were all very well-acted.  There were so many actors that looked soooo familiar, yet I couldn't place where I'd seen them.  That was frustrating:-/  Anyway, yes, all magnificent.  Like I said, Friar Lawrence and Tybalt were standouts, as were whoever played Romeo's friend and cousin, and Leslie Manville in the role of Juliet's nurse.  I know, right?!  Mrs. Hale in Romeo and Juliet!  That was a happy thing, seeing her:)

Oh, oh, and the MUSIC!  Wow.  Suffice it to say, I was impressed.  Enough to convince me that I want to buy it (and not just one track, but possibly the entire thing).  Seriously, it was amazing.

One thing I find interesting is how Shakespeare, and consequently the makers of this movie, managed to make a story full of immensely unhealthy relationships (parent/child, lover/lover) engaging and compelling, even to a confirmed old bachelorette slightly cynical person such as myself (speaking in terms of romance, a relationship such as the one between Romeo and Juliet often incites criticism and protestations from me, such as "Seriously, y'all?  You literally just met a day ago, and you're getting married?").

I think the major reason is because these two star-crossed lovers, though foolish and naïve, are just so darned sweet in their interactions. 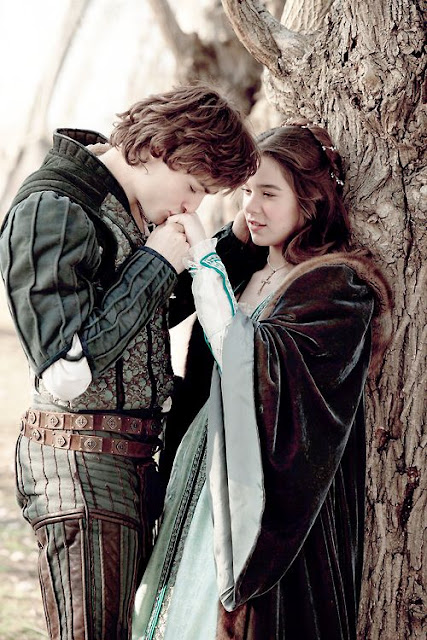 Their love is too all-consuming, certainly, but at the same time, there is such a level of purity and devotion all too often lacking in modern relationships that you can't help but "root for them."  They, at least, understand the idiocy of senseless familial grudges that spill into bloodshed, and they strive to bring them to a close.

Which is part of why the end is so tragic.  It calls to my mind Isaiah 2:22:  "Stop trusting in man, who has but a breath in his nostrils.  Of what account is he?" (NIV)  It reminds one of how important it is to love, yes, but also to remember that you should never become so consumed with a person that you're willing to kill yourself as soon as that person dies. 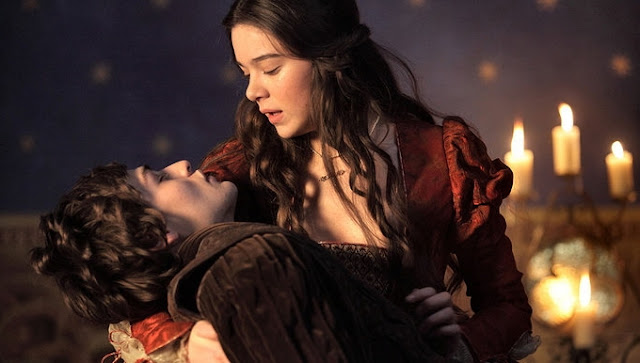 In fact, I think I read that Hailee Steinfeld said just such a thing, something like, "I understand why Juliet would do what she did, but I'm not sure that I would ever do something that drastic."  (It was something along that strain, at least.)

"Never was a tale of more woe, than Juliet and her Romeo." 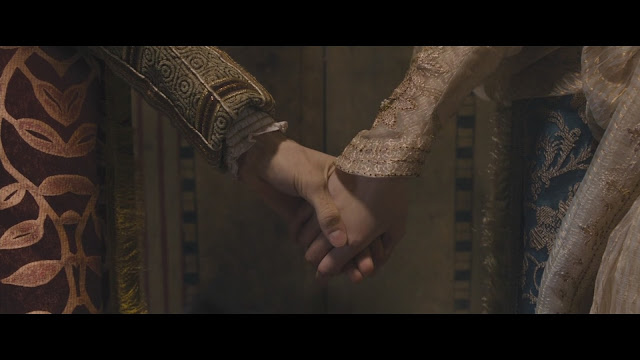 And, just because we don't want to end on such a sad note, here's a little something I found on the Internet when looking up stills of this movie: 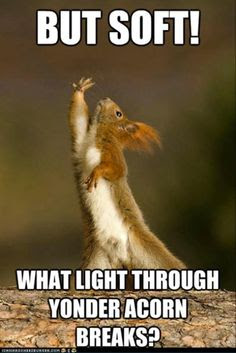