Legends of Western Cinema Week: Is It a Western? 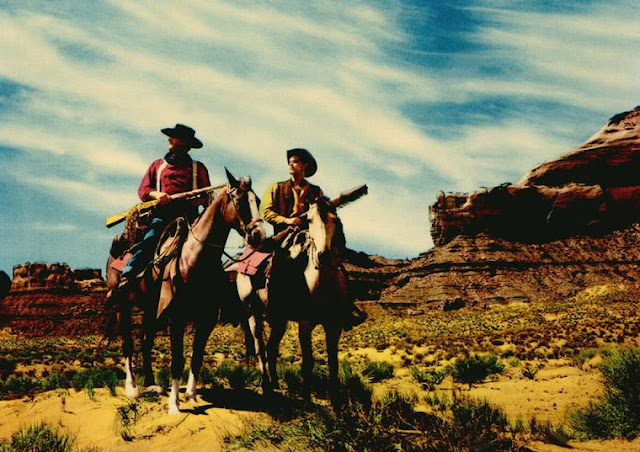 Howdy, people!  Welcome to the first joint post of Emma's and Olivia's, put together for Legends of Western Cinema Week!:D  *fanfare*

"What makes a Western?  It seems to me that it's not simply that it took place in the Western part of the United States, nor is it big hats and peacemakers and horses. I mean, all of those are elements, certainly, but what makes a Western a Western to me is that you lack the recourse of civilization to work out whatever the problem is, and therefore characters must work out the dilemmas for themselves."
~ Walter Hill, director of Broken Trail

Most people have a pretty good picture of what a 'classic' Western is supposed to look like. Cowboys, cattle drives, cavalry scouts, outlaws, and a healthy dose of family tension are what characterize most of the great oldies.  Oh yes, and of course the famous ruts and cliffs of the American West.  And dust; lots of dust.

But sometimes the line between what's classified as a 'Western' movie and what isn't can be a little blurry.  We're going to take a look at some of our favorite movies that are kind of on the fence in that regard.  Sort-of Westerns, off-beat Westerns--whatever you want to call 'em. 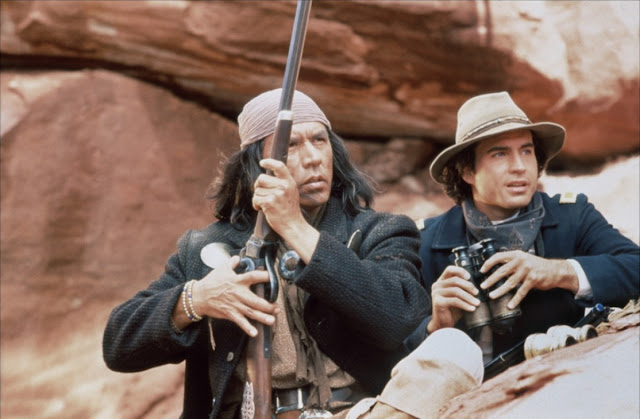 This is a drama about the legendary Apache chief Geronimo and his resistance to the U.S government. It's a well-made historical movie, but not particularly epic; mostly it's just sad. Not a very enjoyable movie. The cast is excellent (though I was a little disappointed with Robert Duvall's role), and Jason Patric's character, Lt. Charles Gatewood, is one of my favorite screen characters of all time. Worth watching if you like historical dramas about Indians, but not something I'd want to watch more than once.

Really, though, watch it just for Lt. Gatewood. He's wonderful. 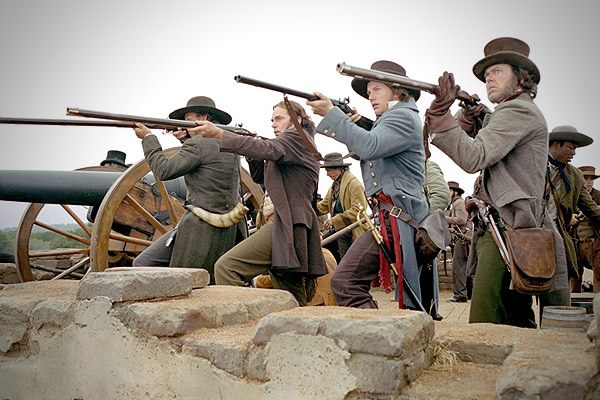 I've seen the old 1959 movie The Alamo on several lists of 'best westerns ever made', but this newer version doesn't seem to be considered among the Western genre. IMDB lists it as historical, war, and drama. There are no cowboys, and the Texas Revolution took place before the stereotyped 'western' period, but the movie DOES take place in Texas and there's a healthy dose of that Old West feel. It's a fantastic historical drama, with an amazingly talented cast and some of the most heart-tugging scenes I've ever seen in a movie...such as the last night before the battle, when all the men are sitting around writing letters to their families, and the part where Davy Crockett plays his fiddle on top of the fort along with the Spanish military band. *shivers* Read my review here. 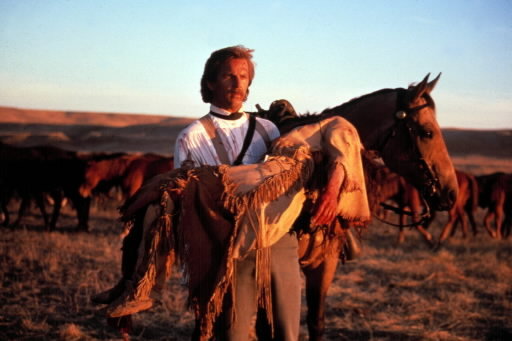 One of the most classic American movies ever, Dances With Wolves is also on the edge of Western and just plain Drama. I've seen it on some people's Western Bucket Lists (I read a lot of magazines, you see), but then I've also read that some people consider it a 'fake' as a western. Well, whatever it is, it's pretty darn good. 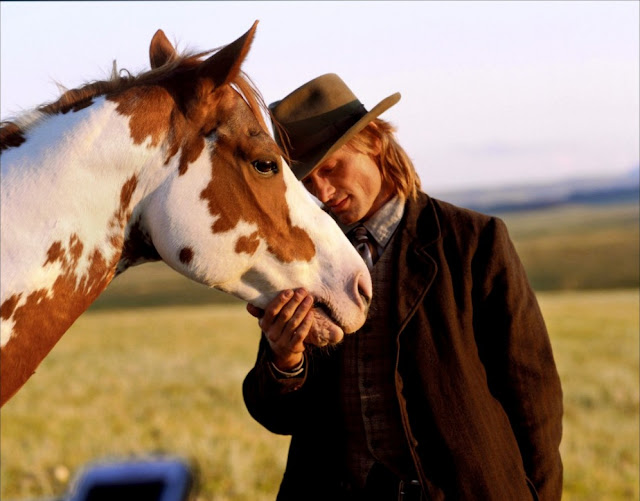 One of my all-time favorite movies, Hidalgo is the one that really started my whole western obsession. Frank Hopkins is responsible for my infatuation with cowboys everywhere. :-)
So strictly speaking, you wouldn't call this a western. Most of the movie takes place in the Middle East, but it IS the story of a cowboy and his heritage, how he overcomes ginormous obstacles, and it's got plenty of the grit that's prevalent in stories about the West. So if I want to call it a western, I will. :-) 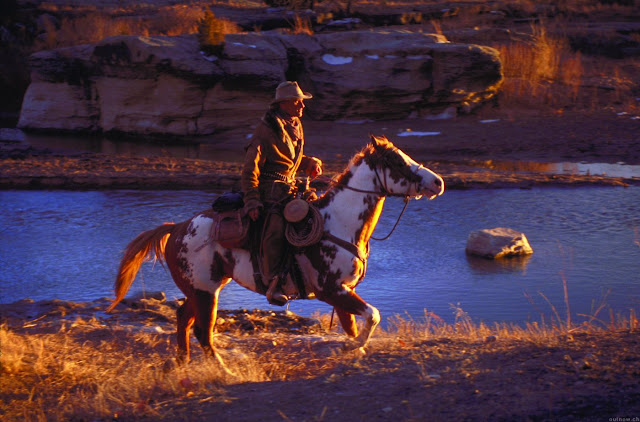 Okay, yes, I did choose one of the most Western-y pictures to put there;)

Anyway.  Is Hidalgo a Western…well, admittedly, the majority of the movie actually takes place in the Middle East, not the American West.  There aren't bank robberies, lassos, or spurs (except, of course those belonging to Frank).  However, the main character comes from the West, is actually *SPOILERS* part-Indian *END OF SPOILERS*, rides a painted, decidedly Western-looking horse, and is called 'Cowboy' by several characters.  Furthermore, he encapsulates the best of the spirit of the West--chivalry, courage, triumph over adversity, etc.  Also, in the middle of the Arabian desert, civilization is of course a mirage, and he must problem-solve independently.

Long story short, while I'm not sure I could classify Hidalgo as a Western in the most technically hard-core sense of the term, I think the beginning and end of the movie capture the essence of a truly splendid Western (and the art of inducing sniffles from vulnerable teenage fangirls *ahem*). 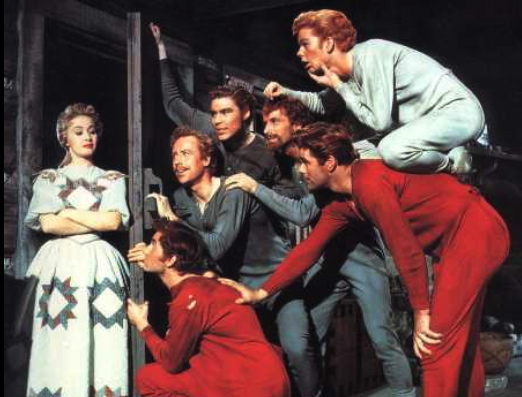 Seven Brides for Seven Brothers is certainly a…stretch to classify as a Western.  But I think it works.  It takes place in the American West, and there is mention made in the beginning of the film about "land needing to be settled."  This isn't really the cowboy sort of Western, though--it's the homesteader sort.  However, Millie is definitely thrust into a rather, ahem, uncivilized world, and has to take control and whip these men into shape almost singlehandedly.

First of all, this movie can be whatever it jolly well wants to be.  Just want that duly noted;)  It's an animated film, a kid's movie, a moving drama, a romance, a sociopolitical commentary, and a story of unlikely friendship that may well bring tears to your eyes.  (I'm dead serious.)

But anyway, the question is:  is it a Western?  I think so.  Taking place at a time when the cavalry was "settling" the West, it looks at that settlement from a different perspective--from the heart of a horse.  (Because, you see, he was there.  And he remembers…he remembers the sun and the sky, and the wind calling his name, and a time when wild horses ran free, and--shutting up.  I mustn't spoil the movie, must I?  Leave the quotes for your review, Olivia, and get back to the task at hand.)  It explores the interactions between the U. S. cavalry and the wild mustangs it sought to tame, and between the Indians and said cavalry, and between the mustangs and the Indians.  It also even includes a sort-of-representative Battle of Wounded Knee Creek.  So, I mean…just sayin'.  The movie takes you back to a different part of the Old West, and it's quite interesting to see it from that viewpoint.

I'm babbling.  I must refrain.  Bottom line:  yes, I think this is a Western, though admittedly an off-beat one. 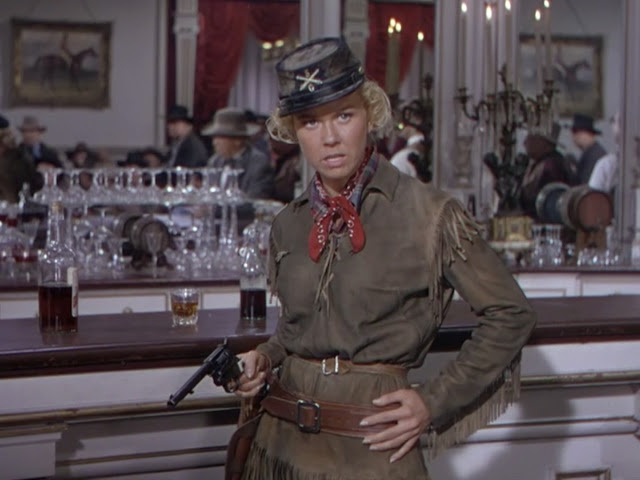 I mean…it's Calamity Jane.  You can't get much more Western that that;)

I'm sure, however, that the makers took some *ahem* liberties with the historical facts, due to this being a musical, but it's got characters such as Wild Bill Hickock, so there's a definite Western vibe to it.  The musical doesn't really focus on the West, though…it's more focused on music and love and such like (basically, what you'd expect from a 50's musical).

So I suppose it is a Western, but, kind of like Seven Brides for Seven Brothers, it doesn't really feel like one.

"It [a Western] is about the value system of a bygone era."
~ Thomas Haden Church, actor in Broken Trail