LoWCW--Spirit: Stallion of the Cimarron {review}

July 28, 2015
"The story that I want to tell you cannot be found in a book.  They say that the history of the West was written from the saddle of a horse, but it's never been told from the heart of one.  Not 'til now.
I was born here, in this place that would come to be called the Old West.  But, to my kind, the land was ageless.  It had no beginning and no end, no boundary between earth and sky.
Like the wind in the buffalo grass, we belonged here--we would always belong here.
They say the mustang is the spirit of the West.  Whether that West was won or lost in the end, you'll have to decide for yourself, but the story I want to tell you is true.  I was there, and I remember.
I remember the sun and the sky and the wind calling my name, and a time when wild horses ran free." 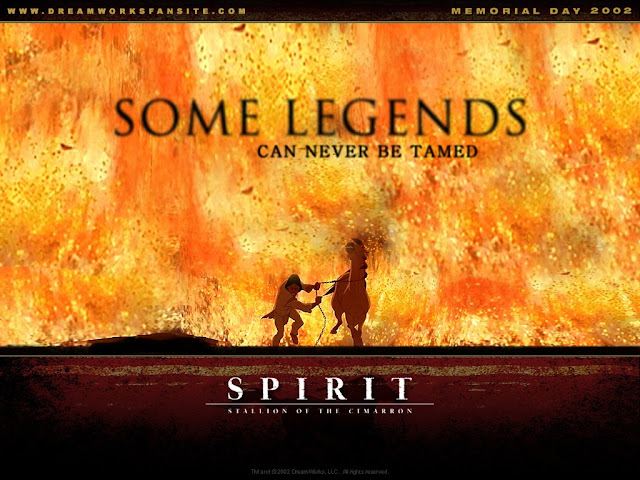 Darlin's, I don't even know where to start.  (But be prepared for a lot of gifs and pictures.)

I suppose with a plot summary?  Very well, I shall try my best.  This movie follows the adventures of a stallion who is captured by the cavalry of the Old West at the time when they were trying to settle the wilderness.  The cavalrymen who take Spirit (as we call him, though he's really nameless throughout the majority of the movie) aim to 'break' him and transform him into the automatons they 'needed' in order to conquer the West.  But Spirit is fiercely loyal to his homeland and his herd, and fiercely protective of independence, and thus he refuses to bend, earning punishment and the General's anger.  However, another captive is soon brought into the outpost--an Indian named Little Creek.  He helps Spirit to escape, and brings him to his tribe's camp, where he meets the mare Rain ( = love interest), and for a while, everything's fine and dandy.  But soon the General comes calling with his troops, determined to overpower this stallion…

…Okay, I am officially butchering this description, but you get the idea.  It's more compelling than it sounds. 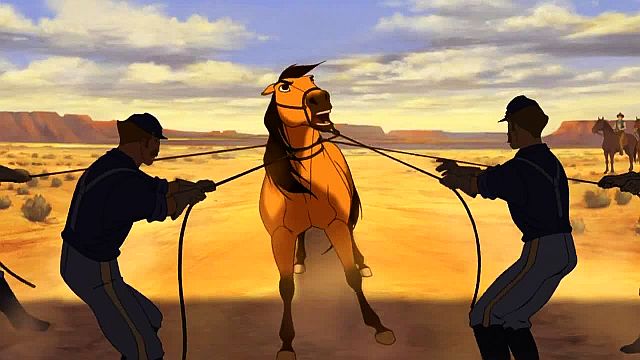 There's really not much of anything negative I can say about this movie, I'm that in love with it, but I will mention that the cavalry are extremely stereotyped in this film.  It's pretty unequivocal that the Soldiers Were the Bad Guys and the Indians Were the Good Guys.  That's not entirely true, and "it behoves us all to take very careful thought" before we take sides on this issue, since, ultimately, none of us were there and none of us can expertly decide what was what in the struggle for this land.  But I warn you, if you watch this movie, you might just come away determined to hate all U.S. Cavalry members you ever encounter in films, books, etc.  So, anyway.  That's basically all I can say that's wrong with this movie.  And honestly, even that can be a plus--because it is such a sociopolitical commentary (seriously, it can be legitimately interpreted that way)--it's more than a goofy love story about two horses, or even a drama about the friendship between an Indian and a horse both struggling for freedom.  It explores the triumph and the tragedy of the Old West as a whole--not just the individual stories with which it primarily deals. 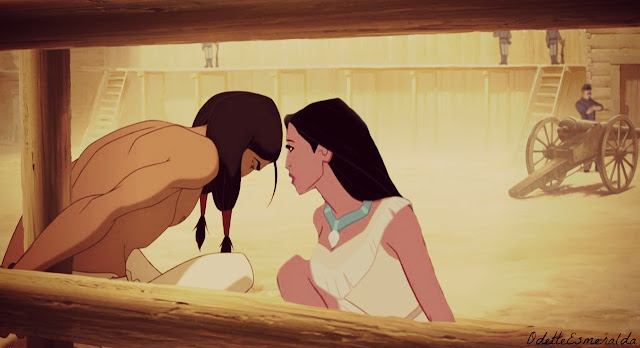 Ohhhhhh, yes.  I am so feeling this now.  New OTP!  Haha, just kidding.  But seriously.  They would be perfect.

There are so many things one could talk about concerning this movie, but right now I'm not feeling very eloquent.  Basically, all I can say is, watch this movie.  It's so powerful.  I know it might seem strange that an animated movie could be as epic as I'm putting it up to be, but I honestly think it is.  However, I grew up with it, and sometimes when one grows up with a particular movie or book, one loses something of objectivity.

Simply in the way it's animated, the emotions (very real and deep emotions) are so clearly expressed through the characters that you might find yourself tearing up.

It's really quite an emotional movie, if I haven't emphasized that enough, haha.

For instance, this part, when Spirit has been captured again after saving Little Creek and Rain, and he's loaded onto the train, is "the low point" in the story.

The song that plays at this part is sooooooooo saaaaaaaaaddd but at the same time hopeful and inspiring and powerful and PEOPLE I JUST CAN'T.

When Spirit is trying to escape from the forest fire the train started...and his chain gets caught over the tree limb...and OH THE FIRE'S GETTING CLOSER!...and then Little Creek is there and frees him and they're running for their lives as the forest burns behind them and heart-pounding music and animation and...wow.

Or when they're both being chased by the cavalry, and THIS PART 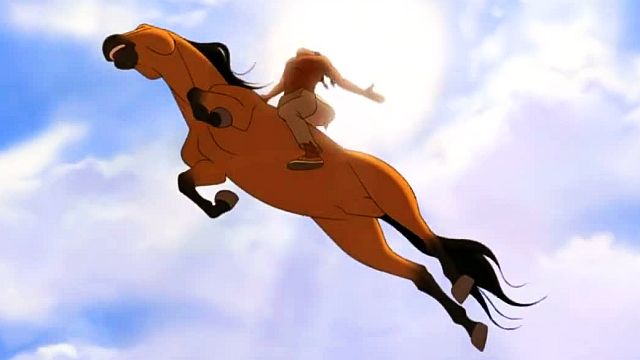 (okay, yes, I know it's unrealistic, but I like to think of it metaphorically, thankyouverymuch) and then this guy's all, "Respect"

and then they look at each other like, "so are we done yet?" 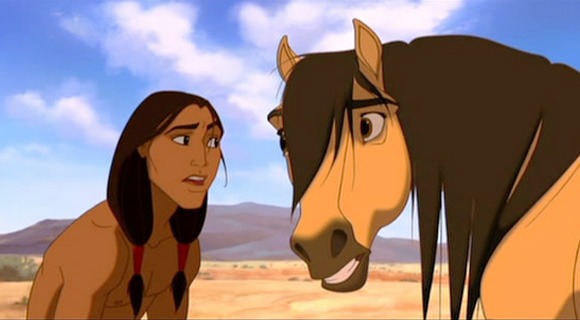 BUT.  The MOST emotional part, possibly, is the part when Little Creek bids Rain and Spirit farewell--when, in fact, he gives our protagonist the name 'Spirit.' 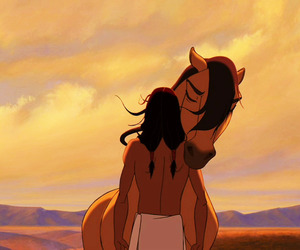 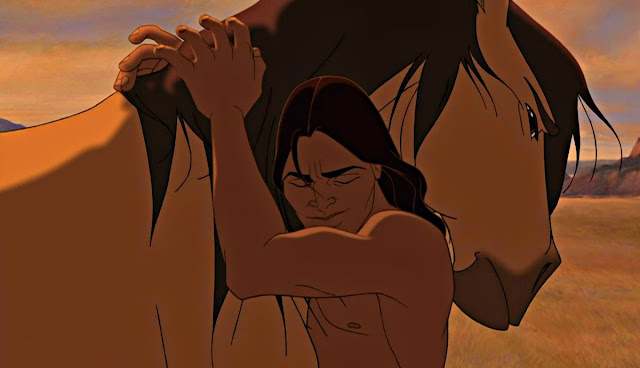 Now, people, Hans Zimmer composed the score for this movie, and LET ME TELL YOU.  So. Flipping. Amazing.  Behold:


That track, "Homeland," is my favorite, I do believe, but they are all so beautiful.  And the lyrical songs hold a lot of memories, hehe ("Get Off of My Back", anyone?) ;)  My favorite of those would probably be either "You Can't Take Me" or "I Will Always Return".

Anyway, drawing a very rambling and inadequate review to a close, go watch it.  Just do.  You won't regret it.

"I've seen every sunset, and with all that I've learned…oh, it's to you, I will always…always return."