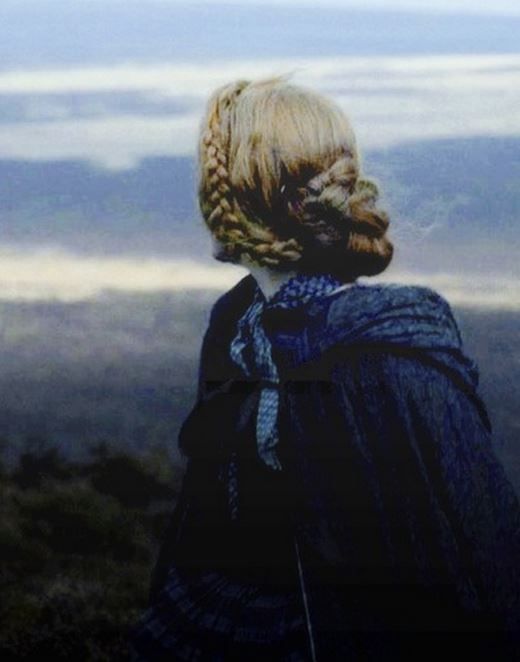 I've seen four adaptations of Charlotte Bronte's Jane Eyre so far, and while all of them have had at least one good element, the two that actually vie for the honor of My Favored One are the 2006 miniseries with Ruth Wilson and Toby Stephens and the 2011 movie with Mia Wasikowska and Michael Fassbender.

Every time I watch these two, I try to figure out which Jane/Rochester pairing is my favorite; and every time, I come to the conclusion that I can't decide.  So, naturally, I've decided to further this exercise in futility by hashing out my feelings here on the blog. :-P  It's pretty disorganized and patchy, but so be it.  Basically, I just wanted to vent a little, and that's what I've done. ;)

(And please bear with me:  This is practically the only Gothic romance story I like and allow myself to get all caught up in every now and then, so there may be gushing ahead since this story has kind of been "on the brain" recently.  Don't worry, my appreciation for the story will subside back to its normal, non-frantic pitch soon. ;)) 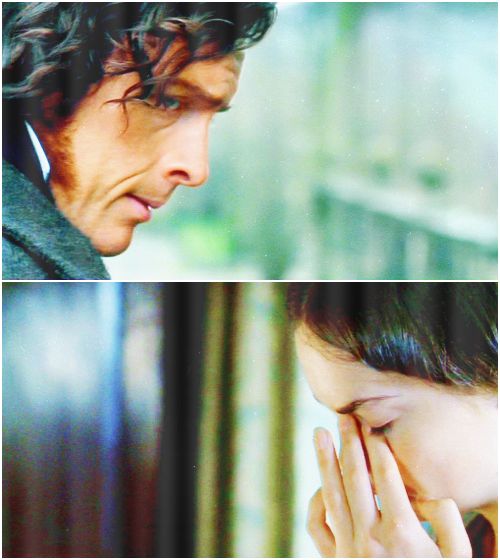 Over the last couple of months, I re-watched both for the who-knows-what time, and I think I've finally figured out my opinion:  The 2006 one has the advantage over the 2011 because it's longer and thus can include more developmental scenes, so you get to see more of the dynamic between Jane and Rochester.  And since both Wilson and Stephens are excellent, both individually and as a couple, you get more attached to their portrayal of the lovers.

However, the 2011 is the one I would probably initially recommend to newcomers to the story.  Taking into account its limitations as a feature-length film, it does admirably.  And there's something about Michael and Mia as Jane and Rochester that's simply haunting.  I love both pairings very much, and there are parts that belong more to Ruth and Toby, but there are also parts that belong to Michael and Mia. 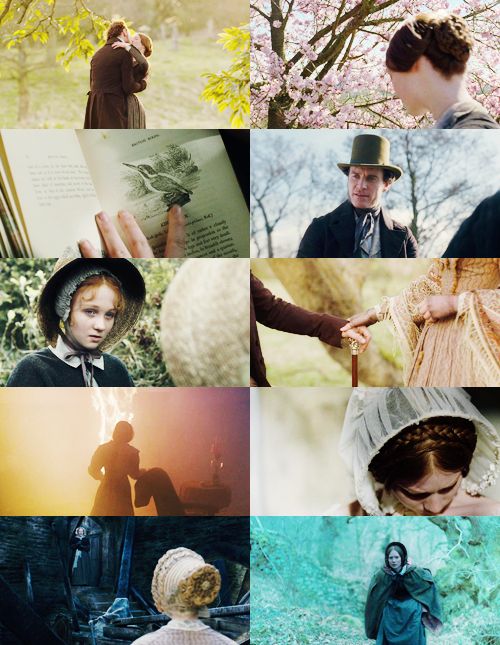 So, in a nutshell:  Neither of them is my favorite, per se.

(Well, that is . . . the 2006 might edge the 2011 out, but that's primarily on merits that I feel the 2011 would be perfectly capable of possessing should it have been longer.  And I'd rather not do without either of them, because both of them have things I prefer over the other.)

The 2006 miniseries really plays up the creepy elements of the story.  In fact, there's so much foreshadowing about Bertha that I feel like it's a little ineffective.  It's scarier than other adaptations I've seen, but there's also less mystery to it.  (There are also flashbacks to Rochester's past and his relationships with Adele's mother and Bertha, so there are some inappropriate--though brief and portrayed as negative--moments.)

Somehow, though, it's also (overall) lighter in tone than other adaptations I've seen.  At times there's even breeziness.  This I like. 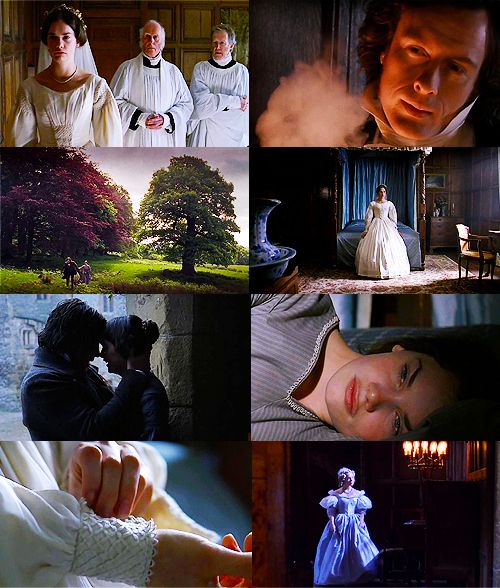 The 2011 movie is the more severe of the two, effectively streamlining the story into its two-hour runtime and focusing on telling the romance in a taut and practically austere manner.  Fassbender and Wasikowska are almost icy at times, especially when compared to Stephens' and Wilson's impassioned performances, but I actually really like that adaptational technique.  To me, one of the defining characteristics of Jane Eyre herself has always been her adamantine moral backbone, so this portrayal where her emotions and Rochester's emotions are always relatively quiet--even when they're intense and deep-running--works well for me.

And I think Michael and Mia themselves are so well-paired together.  They both seem, as actors, to have the capability of expressing that sense of quiet passion, and they can both do so much with their faces in such a subtle, barely noticeable way (especially Michael). 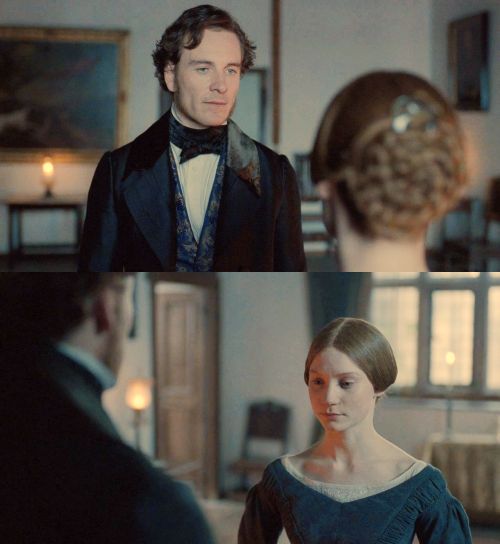 And then for all that severity--and despite the limited timeframe--we do get brief, blissful glimpses of their happy, playful selves, and it's awesome.

All that's not to say, though, that I don't also love Ruth and Toby as the couple.  Obviously. 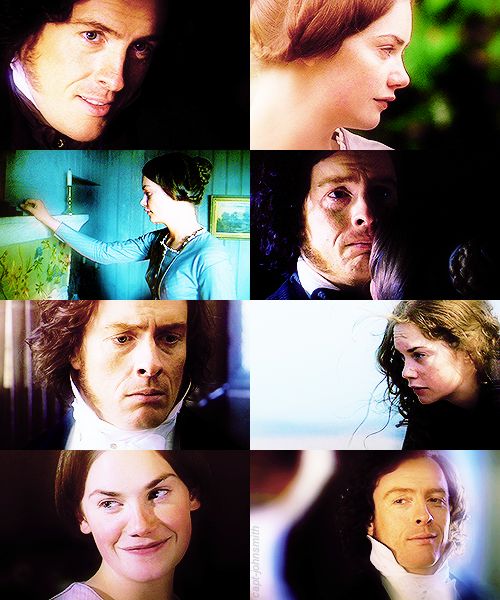 Ruth Wilson's Jane is both serene and emotional--a difficult balancing act to pull off, but one which she does very winningly.  Her Jane is quicker to "get worked up" about something than Mia Wasikowska's, but it works well.  I like how the makers portray how Jane begins to have an influence over Rochester--not in a manipulative or controlling way, but in a quiet, unique, beneficial way. 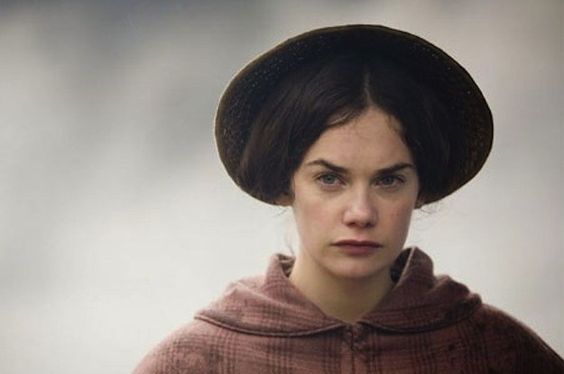 In my personal opinion, Toby Stephens evokes the full spectrum of Rochester's character: His moodiness, his sudden bursts of playfulness, his desperate need to escape the blackness of his reality, his guilt-wracked love for Jane.

For instance, the scene when Jane approaches Rochester about her leave of absence and finding a new position ("Give me back nine. . . . Jane!  I have need of it.").

And--especially--the very end.  In this version, we actually get to see more of their reunion and see what happens after that lovely line in the book: "Reader, I married him."  And really, those three scenes are so precious and adorable and therapeutic after all the trauma of the rest of the story that the inclusion of them is virtually a tiebreaker. 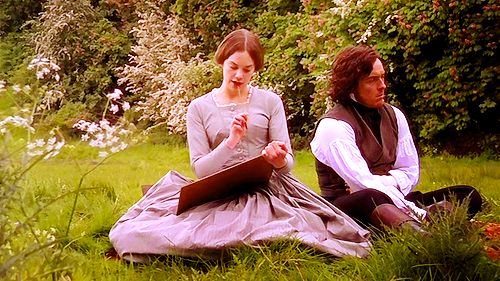 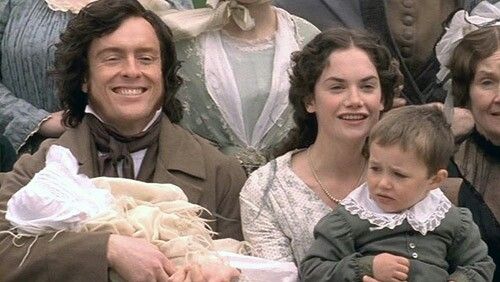 Squealing break:  (Like, seriously, their banter in the last few scenes.  Jane's teasing and grins and then Rochester's huffy outbursts:  "You, heiress."  *covers face with hands*)  It's really very cute.

Although, considering the focus and tone of the 2011 film, I don't complain about the ending to that one, either--the simplicity of the last sound of the film being Rochester's soul-felt exhale as he holds her is, I think, actually an excellent touch.  It conveys what viewers need to know: torment has given way to healing. 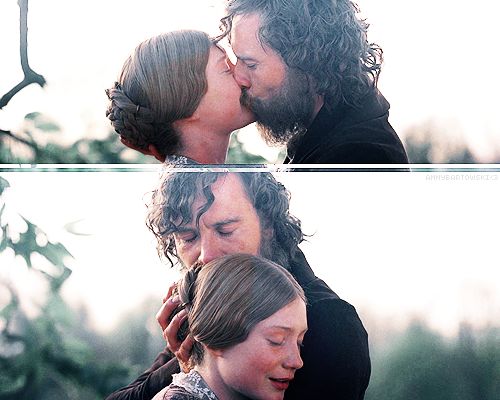 For the non-sappy elements: I like both Mrs. Fairfaxes, and both Adeles are adequate (though neither is outstandingly memorable).  I like St. John Rivers much more in the 2006.  That version sufficiently explores his problems with stoicism/asceticism while still making it clear that he actually does have feeling in him.  (The 2011 focuses too much on his rigidity and not on his humanity, I think, and he comes across as too stern and unlikable.)  Both Berthas are good. *shudders*

The story structure of each is interesting.  The 2011 is told primarily in flashbacks, which usually isn't my favorite but which works well in this particular instance.  The 2006 is told almost completely chronologically, but then after The Big Reveal it jumps right to Jane on the moors and only shows us Jane's and Rochester's discussion and Jane's flight after she's been taken in by the Rivers family.  It's honestly a little jarring and choppy, though I understand that it Heightens The Drama and all that.

Oh, and speaking of The Big Reveal . . . let's talk about the aftermath of that, shall we? 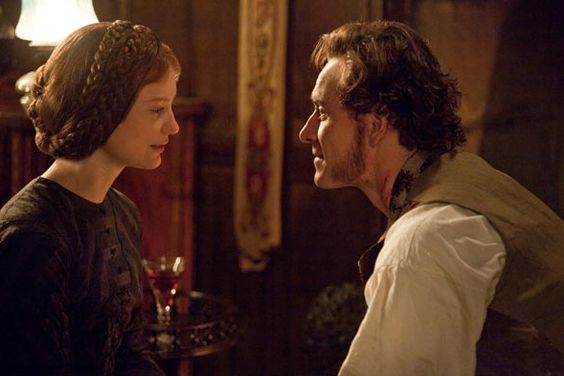 It's one of my favorite 2011 scenes.  Fassbender is at his best, tearing into the tortured heart of the character and his quandary in all his flaws and virtues; and Wasikowska's Jane is unyielding but sympathetic.  It's all far closer to how book-Jane would have conducted herself after finding out than the 2006 interpretation is.  "But on this point, it will be as well to be silent."

('Cause, like, really.  Satisfying on a romantic level and all, but still.  Not The Way To Behave.)

Finally, to close on a happy note, A Word About The Proposal Scene. 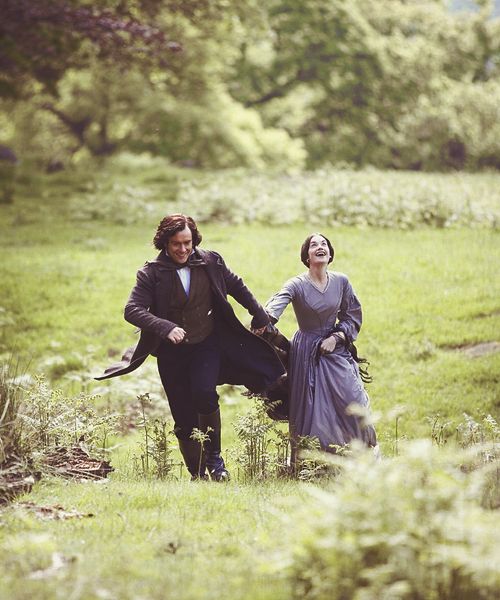 Both versions are good--I especially like how the 2011 is filmed, with all the beautiful late afternoon light and the rustling leaves and everything--but the 2006 one is far more passionate (broken record alert), so it's arguably a little more moving. ;)

Anyway.  At some point, I might like to do more of a character study of Jane and Rochester themselves, but for now I think this post is quite long enough and will take the edge off my current JE phase. :-P

Basically:  These are both very good movies.  Highly recommended if you need a touch of Dramatic Spice in your period films viewing. ;)