- December 31, 2014
"For I saw very well that I could not have been intended to die, or I should never have lived; not to say 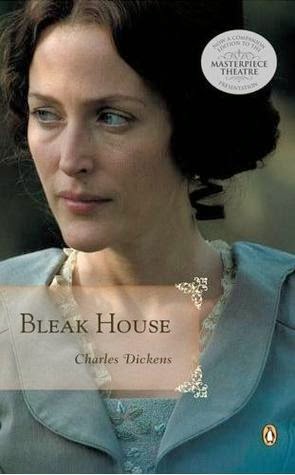 should never have been reserved for such a happy life."
~ Bleak House, Chapter 36

Charles Dickens is not my favorite author.  'T'is just a fact.  Naturally, I love his conclusion to A Tale of Two Cities (makes me sob), but having read that book and a part of Little Dorrit, as well as seen adaptations of LD and A Christmas Carol, I'm simply not a huge fan.  That isn't to say I don't think he's an amazing author, he just isn't my favorite.  There are reasons for that, but I shan't go into them now.  Suffice it to say that when I started reading BH (Bleak House) on Goodreads, I didn't expect to finish it.  I was fairly convinced that I would find it yet another dark tale that would weigh me down until I reached the far-off ending, and to be frank I didn't want to have to sacrifice hours and hours in the dark to get to a faint beam of light at the very end of the book.  (So, to be honest, I'm not entirely sure why I even started reading it in the first place.)

Then something happened that I hadn't expected:  the story drew me in.  From the start of the second paragraph ("Fog everywhere.  Fog up the river, where it flows among green aits and meadows; fog down the river…"), I began to give the novel a second look.  Hey, I thought, this could be worth another chance.  And boy, was it ever.  The characters were multi-faceted and the prose was stunning, such as Dickens usually produced, but unlike other Dickens books (in my opinion), the story itself was compelling and beautiful without constant sorrow and despair.  And that is part of why I "stuck with it."  It didn't just depress me (not to sound like a "shallow reader," or anything).  It was difficult in parts, of course, BUT there was light throughout it all.

Now, I don't intend to review all of the characters, but there are a few upon whom I would like to touch.

First, Esther Summerson.  Sadly, for about the first half of the book, Miss Summerson reminded me most uncomfortably of…Elsie Dinsmore.  I know, I know!  Those of you who have read it, don't hate me!  All I'm saying is that at first, her extreme naiveté and how "perfectly" she behaved was reminiscent of that certain person.  But that was just for the first half of the book.  By the conclusion (and for a good while preceding it), she had won me over entirely.  She is rather "perfect," but she's strong, principled, kindhearted and optimistic even after all she's been through.

Next, Mr. Jarndyce.  *SPOILER ALERTS*  Okay, whoa, what the HECK, man?  Proposing to Esther????  Seriously?!  You are her FATHER FIGURE!!!!!  That is so incredibly wrong.  I don't even have the words.  *collects herself*  Okay, so needless to say, I was caught completely by surprise when Mr. Jarndyce wrote that letter.  The idea had never crossed my mind.  (I was in fact lying on the couch groaning and making other sounds of disgust, including, "No, no, NO!" when I read that section.)  Now, I am not at all against the whole man-older-than-woman thing prevalent in period dramas (for example, Mr. Knightley and Emma, Mr. Rochester and Jane), but "THIS. is sick." *END OF SPOILERS*  Badly done, Mr. Dickens.  Badly done indeed.

And Lady Dedlock.  Ho, boy.  How do you even.  She is a BRILLIANT character.  Brilliant.  And *SPOILER ALERT* I was sooooo relieved that she didn't kill herself!!! *END OF SPOILER*

But my favorite character, I believe, was Mr. Boythorn :D  I related the most to him, in his "carrying everything to the superlative degree," and he was so boisterous and blustery, but with such a huge heart underneath it all:)

So, if you haven't read BH and are hesitating due to the ominous title and the formidable size of the thing, take heart!  I personally found it less depressing and disturbing than Little Dorrit, and as to the size…if it grabs you like it grabbed me, you won't even mind the length (you'll probably, on the contrary, be thankful for it).