This movie is just about everything that a good period drama should be. :)

DVD cover synopsis (edited by moi): When England's throne is suddenly thrust upon him, amidst royal family scandal and impending world war, King George VI must overcome a lifelong, debilitating speech impediment to lead his nation.  After his iron-willed, compassionate wife Elizabeth secretly enlists an eccentric speech therapist [a.k.a. Lionel Logue], the two men forge an unlikely friendship that will ultimately empower the monarch to find his voice, inspire his people and rally the world. Based on an inspiring true story, The King's Speech has been universally hailed as "a masterpiece. The majestic cast is overwhelming" (The New York Observer). 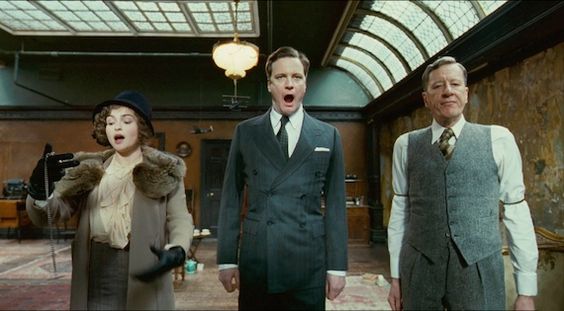 First of all, for anybody out there who may not have watched this movie but knows that it is rated R and is thereby scandalized that I am reviewing it, let me explain the rating before we go farther: Basically, the reason this movie is R is because part of Logue's therapy method involves trying to break through Bertie's composure in order to get him to truly emote and vent and all that jazz.  So basically he has him go on a little swearing rampage at one point, and the f-word and the s-word are used multiple times.  That's mainly just in the one scene, although it happens again when Bertie is preparing for the big speech near the end, and while Lionel is silently coaching him during the actual broadcast.  Make sense?  (There is other, relatively mild content as well, but nothing other than the profanity to warrant the R rating.  Okie-day?)  And it's bad 'cause I know swearing is wrong and all but it's actually really funny and kind of touching in this, to be honest. Oh, dear.

Now that we've got that out of the way, I really like this movie.  It is most excellent, m'dear things.

As you may have noticed in the above picture, the cast is fantastic.  Colin Firth as Bertie, Helena Bonham-Carter as Elizabeth, Geoffrey Rush as Lionel, Michael Gambon as King George V, Derek Jacobi as the Archbishop, Guy Pearce as Edward, Jennifer Ehle as Myrtle (Lionel's wife) . . . 'tis a period drama lover's dream cast. :) 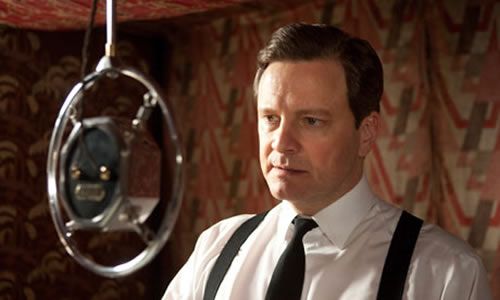 Colin Firth won an Oscar for his role in this, and I'm so glad he did.  HE DESERVED IT.  Bertie has a terrible stammer, and it's painful to watch some of the scenes.  But that's all to the good, eh?  Shows what a tremendous job Firth did with it.  He really embodies the stammer and the character and you can tell that a lot of thought and research went into his portrayal.

I think the two scenes that get to me the most (in terms of sadness) are 1) when Bertie goes to visit Logue *SEMI-SPOILERS* after his (Bertie's) father dies *END OF SEMI-SPOILERS* and he finally starts to open up to Logue about some painful things in his past, and then 2) when Bertie breaks down in the face of his succession to Edward's abdication.  It's difficult to convey how truly, truly poignant and heartbreaking it is to watch Bertie start to croon, "Then she wouldn't feed me . . . far, far away . . . " in the first scene, and to see him just totally break down in the latter scene and sob openly, safe in only his wife's company . . . those two parts just really get to me. 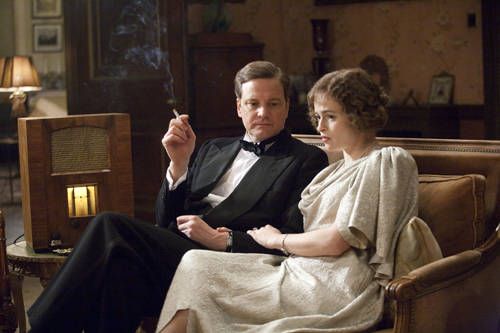 I also love Helena Bonham-Carter's Elizabeth (# classy sass level = through the roof), and Geoffrey Rush's Lionel is just fantastic.  I LOVE HIM.

Like the best movies, The King's Speech has just the right blend of drama and humor -- it can be sober and sad, but I don't think it ever really feels weighty, per se.  There's the smooth, cutting, ever-so-British humor we all love, and several sweet relationships to let you know that the protagonist is going to be alright.  Lots of people have his back and love him; he'll make it through this.  And that's a nice thing to know sometimes, isn't it?

Since watching the first season of The Crown (another thing I meant to review and didn't), I've found it particularly interesting to pay to attention to Bertie's relationship with the young princesses.  (And, surprisingly, the girls both look strikingly like their adult counterparts in The Crown.)  It's odd, but now I think I see undercurrents of the different relational dynamics that TC (particularly in the episode "Pride & Joy") indicated that each of the princesses had with their father.  But then I feel like I'm just imagining things. :-P  Anyway, it's an interesting field of study within the movie, for me at least. ;)

All that aside, the relationship between Bertie and his two little girls is terribly endearing in this. :)

There's not much that I can think to improve in this movie.  A few scenes, such as Lionel's audition with the Putney company, seem to slow the story down a bit and seem a little random/unnecessary, but that may just be my impatience as a multiple-time viewer to "Get to the good parts". ;)

Also, while it's ever so much fun to see Jennifer Ehle opposite Colin Firth again, her very first scene seems to be somewhat lacking.  It almost makes you think that maybe the Logues' marriage isn't so happy.  But then by the end of the film they've shown several times how they work together as a couple in a subtle but satisfactory way that relieves any slight concerns I may have.  (And the scene where she comes back from bridge early . . . ALL THE YES.  "Logue, you're being a coward."  "You're ---- right." <3 <3 <3  Sometimes, again, my movie-crossover imagination gets the better of me, and I wonder if the very calm, cool, and collected way Bertie greets Myrtle is a nod to P&P, because the makers knew all the period drama ladies would be in a dither to see the two of them together again and wanted to give them some sort of unspoken, crossover acknowledgement?  Again, I'm being silly, and I probably only think that because I saw a Pinterest edit to that effect. :-P) 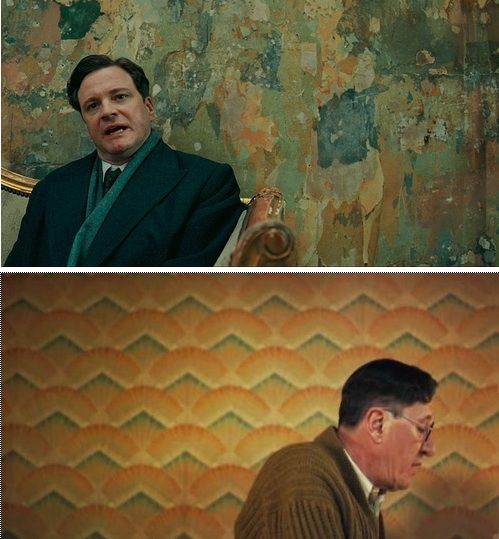 Firth and Rush do a fantastic job in bringing Bertie's and Logue's friendship to life.  Their buddy banter (if I may use so casual a term for a movie like this) is understated, but SO real and evident and moving.  I love me a good bro unit, and they do it so well.  Logue truly cares for Bertie, initially just from a therapist-patient perspective, but eventually as truly equal friends, and I love how we can see that *SEMI-SPOILERS* Bertie's rejection of him at that one point truly does hurt *END OF SEMI-SPOILERS*.  Gahh, the more I think about the way their relationship evolves throughout this movie, I keep getting happier. :)

All in all, I highly recommend this movie, as long as you're prepared for the outbursts of strong profanity and the sub-plot that revolves around Edward's scandalous relationship with Mrs. Simpson.  (There are some different innuendoes regarding this throughout the movie.)

It's a wonderful film -- the story of a truly touching historical friendship excellently told. 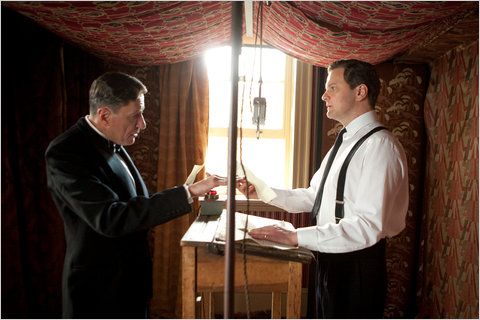 [Also, super random, but I found this recently and Felt the Need to Share.  You're welcome.]