- July 15, 2018
As you may know, Allison Tebo, author of The Reluctant Godfather, is relaunching the book in celebration of its new cover!  (I think I got that right?) 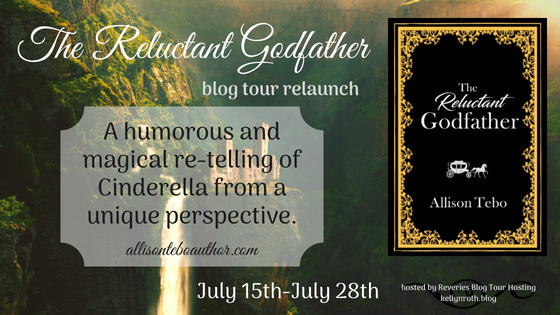 The Reluctant Godfather is one that I've been wanting to read for a while now, and, y'all, I finally got to!  Ms. Tebo was kind enough to supply me with a review copy.

SQUEE GUYS IT WAS SO GOOD!  I know you've probably all heard this so many times before, but it truly is an excellent novella.  {In fact, it contributed to making me late for work one morning.  So WAY TO GO, ALLISON. *scowls*  (Not really.)}  Burndee, in particular, is as grumpy and lovable as you've heard.

I think the humor is the best thing about this story -- the wit, the little twists that seem counterintuitive to the fairytale as we've come to expect it (such as Ella being terrified of mice, or Burndee's spell not working perfectly at the first try, etc.).  Also, I still love the idea of changing it to a fairy godfather instead of the traditional godmother -- so cool!!

Burdnee, as I've said, is quite the winsome one.  He's also hopelessly oblivious to what's right in front of his face, but that allows the reader to have a few knowing snickers behind his back, as it were, before he finally figures it out.

Ella is sweet, too.  I wasn't utterly enthralled by her character, but I don't know that that was the intention in the first place.  I think I would have liked a little bit more development about why she did what she did beyond the general selflessness and kindness angle, but I don't know.

Colin is fun; I liked how chill he is.  Sometimes a character who just refuses to let themselves be ruffled by things -- especially if that placidity irritates other more excitable characters -- is very satisfying. ;)  He doesn't get a whole lot of "screen time," but that's fine, due to the whole premise of the twist on the original fairytale.

The baking addition is all kinds of cute, especially when we got a bit more of a glimpse into how personal it is to Burndee.

The writing is excellent, too -- again, very witty, making good use of vocabulary (I had to look up some words! :D) and description and such.  I had a few tiny, tiny quibbles -- for instance, I sometimes felt like ellipses were used too much, and I think, for me, too many ellipses can feel a lot like telling instead of showing, but that may just be a personal disinclination.  My only really significant concern was the fact that the last name of Ella's stepfamily was de Ghent.  For those of you who don't know, that's the name of the stepfamily in Ever After, the 1998 film retelling of Cinderella.  I'm sure it was unintentional, but it did make me a little uncomfortable.

All in all, a thoroughly enjoyable retelling of Cinderella that I'm very glad I got to read. :) 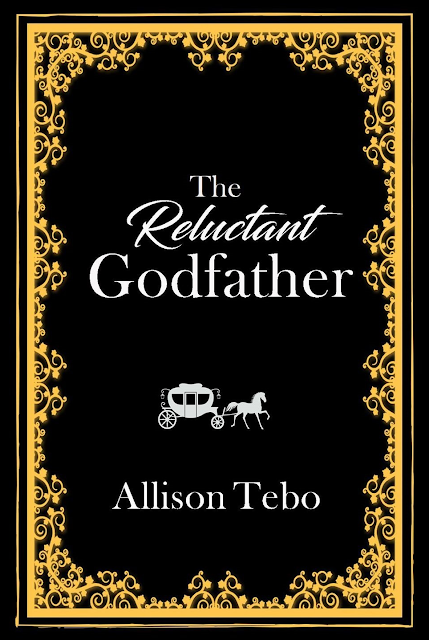 Official blurb:
A humorous and magical re-telling of Cinderella from a unique perspective.
Burndee is a young and cantankerous fairy godfather who would rather bake cakes than help humans. A disgrace to the fairy order, Burndee has only two wards entrusted to his care…a cinder girl and a charming prince.
A royal ball presents Burndee with the brilliant solution of how to make his wards happy with the least amount of effort. He’ll arrange a meeting and hope the two fall in love.
The debut novella from Allison Tebo, ‘The Reluctant Godfather’ is a new addition to the charming fairy tale tradition of Cameron Dokey and K.M. Shea.

Allison Tebo is a Christian author in her mid-twenties who loves to write fiction in every genre. It is her goal to write fiction that appeals to many different kinds of people by writing clean, classic fun. Her desire is to provide quality stories for every age to enjoy.
When she is not writing, Allison works as a sales associate for a major transportation company or might be found singing, painting, baking, or defending her championship title as Gif Master.
~ ~ ~ ~ ~

But wait, guys -- there's more!  In celebration of the new cover release, Ms. Tebo is hosting a very generous giveaway! 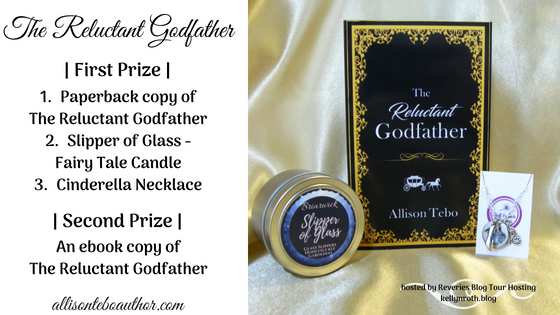 The Reluctant Godfather is available for purchase on Amazon and the author's website!