Widower Ben Whittaker joins a senior intern program at an up-and-coming online clothing store.  He finds himself working directly under the company's multi-tasking founder, Jules Ostin, who is facing challenges in both her business and her family life.  Initially unsure about her new employee, Jules soon discovers a kinship with him as he exhibits an exemplary work ethic and offers her support and wisdom that she desperately needs.

My oldest sister introduced us to this movie, and I'm glad she did.  I've seen it a few times now and like it very much.  It's an excellently made film.  (Nancy Meyers, who did the Steve Martin remake of Father of the Bride and the Lindsay Lohan remake of The Parent Trap, did this one as well, and I'm not surprised.  The movie displays all the trademarks I've come to expect from her:  a general level of reasonable family-friendliness, sharp scripting and production, and a talented balance of humor and everyday, relatable human depth.)

The story and setting are very modern ones, more modern than I usually watch in anything that isn't a straight-up chick-flick.  This is just a movie about inter-generational friendship ⎼ not usually the stuff of deeply enthralling legend.  (Unless you think of all the mentor-mentee dynamics in the classical canon.  Then I guess it kind of is.  Anywho.)  But boy-howdy, does the plot ever draw you into that friendship and get you invested™.

I love how Jules and Ben figure out that they're kind of kindred spirits.  I love how their relationship is equitable: both have things to offer the other.  Their few-score age gap doesn't mean they don't have things in common, and the development of their interactions is really adorable and pure and sweet. 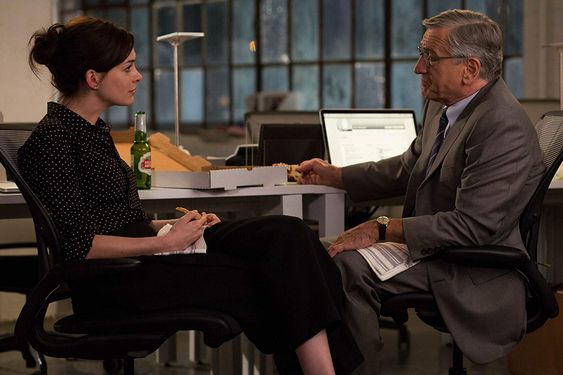 That's not to say it isn't also deep, however.  The emotional climax of the movie comes when Ben accompanies Jules on her cross-country trip to interview a prospective CEO for the company.

*SPOILERS*  I love this scene.  I love how stripped down it is and how beautifully it's acted.  It's just Hathaway and de Niro doing their thing: embodying two characters and making us feel for them.  Both of them have, at this point, found out that Jules' husband is having an affair, and so the night before this high-pressure executive meeting, they grapple with that together.  Jules bares her pain and anger and uncertainty and Ben tries to give her comfort and advice.  And there are certain lines and expressions in that scene that nearly make me cry.  (I won't share them because, you know, watch it for yourself and all that. ;))  It's such a delicate mixture of devastation and consolation. 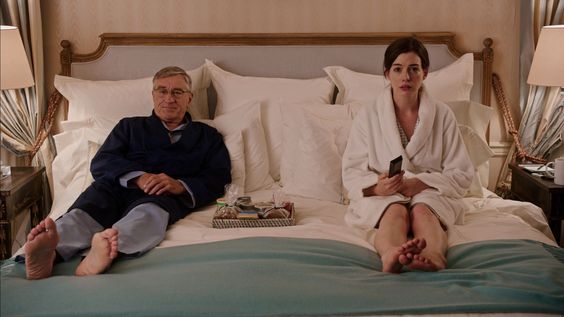 Anne Hathaway definitely deserved the Oscar she won for her portrayal of Fantine in Les Mis, but honestly, I'm almost of the opinion that this scene alone should have garnered her another.  She completely inhabits it and she's so extremely vulnerable, so believable in that role of a normal, you-might-meet-any-day woman who's going through a hell that's all too common.

(Plus, can we give a shoutout to the artistic choice of including the "You Were Meant for Me" scene from Singin' in the Rain?!  And Ben crying??)

Okay.  Enough about this scene. *END OF SPOILERS* 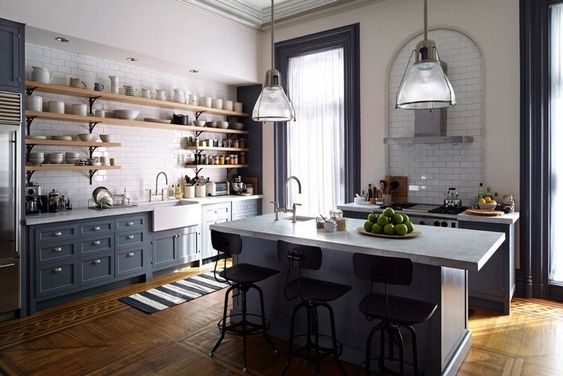 Superficially speaking, the film is also very satisfying.  It has such a crisp, (what I believe is) intentional color palette.  There's the sleek, monochromatic modernity of the About the Fit office space and the Ostins' house; the soft, lamp-lit golds and browns of the nighttime interiors; the breezy greenery of the outdoor sequences; etc. and so forth.

It's a movie full of laptops and coffee and traffic and morning sunlight streaming into urban kitchens; of family dysfunction and brave smiles; of relevant conundrums and everyday catastrophes.  It's chic and gentle and inspiring and wholesome.  (Plus, did I mention it's funny?)

So, yeah.  I kind of think you should try it. 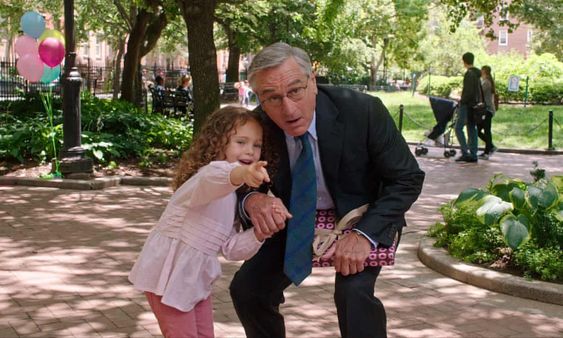 Sex: One very mild fade-to-black scene between a married couple, plus maybe a few other insinuations that they're struggling with that aspect of marriage.  It's discovered that one character's spouse is cheating on them.

A character relates how the girl he likes has stopped talking to him after he "accidentally" slept with her roommate.

A character's love interest opens the door to his house in the morning, mildly implying . . . you know, what that implies.

Two slightly more graphic bits: An attractive house masseuse comes up behind a man and surprises him with a complimentary back/shoulder massage; a shot of the man's trousers implies that he has an erection, which he then tries to hide with a newspaper.  (Pretty easily skippable.)  Another time, the masseuse is giving the same man a foot massage, and somebody else comes into the room and gets flustered because the positioning makes it look like they're doing something else. (Which, of course, they're not.)  Also fairly easy to skip.  Both incidents are brief.

[I recognize that this list kind of makes it sound like a not-so-clean movie.  All I can say is, it doesn't seem that way ⎼ generally speaking ⎼ in context.]

Language: Mild, run-of-the-mill language scattered throughout, plus at least one instance of the f-word in a humorous context. 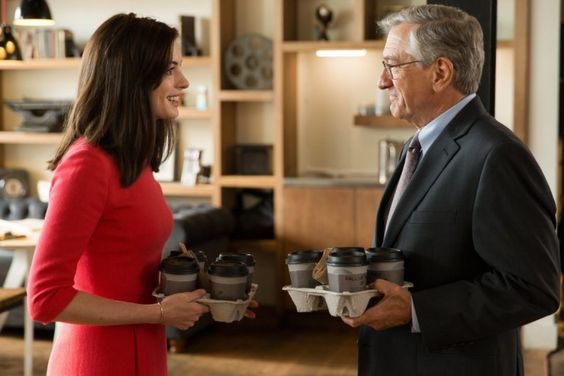 Go forth!  Watch!
Or, if you've watched already, what did you think of it?