- April 16, 2016
It seems like forever since I've done one of Heidi's awesome Inkling Explorations!  So here I am for the April edition :)  This month's prompt is:


~ a description of a lady in literature ~ 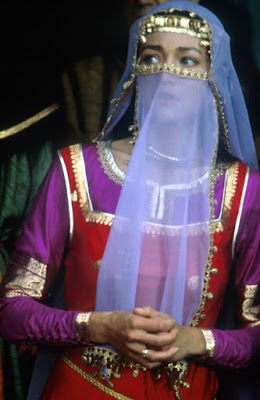 Yet had the Jewess this advantage, that she was better prepared by habits of thought, and by natural strength of mind, to encounter the dangers to which she was exposed.  Of a strong and observing character, even from her earliest years, the pomp and wealth which her father displayed within his walls, or which she witnessed in the houses of other wealthy Hebrews, had not been able to blind her to the precarious circumstances under which they were enjoyed.  Like Damocles at his celebrated banquet, Rebecca perpetually beheld, amid that gorgeous display, the sword which was suspended over the heads of her people by a single hair.  These reflections had tamed and brought down to a pitch of sounder judgment a temper which, under other circumstances, might have waxed haughty, supercilious, and obstinate.

From her father's example and injunctions, Rebecca had learnt to bear herself courteously towards all who approached her.  She could not indeed imitate his excess of subservience, because she was a stranger to the meanness of mind and to the constant state of timid apprehension by which it was dictated; but she bore herself with a proud humility, as if submitting to the evil circumstances in which she was placed as the daughter of a despised race, while she felt in her mind the consciousness that she was entitled to hold a higher rank from her merit than the arbitrary despotism of religious prejudice permitted her to aspire to.

Thus prepared to expect adverse circumstances, she had acquired the firmness necessary for acting under them…

Thus prepared to consider herself as the victim of misfortune, Rebecca had early reflected upon her own state, and schooled her mind to meet the dangers which she had probably to encounter.

You have to read the book to learn about Rebecca's story, and then to experience those stunningly brilliant tête-à-têtes she and Bois-Guilbert (*insert sobs*) have. They are seriously amazing, and the book would do you good.  So go read it ;)

Thanks for a great prompt, Heidi!  I love this link-up :)
books Inkling Explorations Ivanhoe