February 15, 2016
Since unveiling my newest blog look a while back, I've gotten several questions about who the terribly adorable couple on the left of the header is.  And, as Rango would say, "I'm glad you asked me that, and I would be happy to tell ya!  But you're all gonna have to listen up!"

As I've told most of you (and will tell the rest of you when I get around to your comments), those two beautiful people happen to come from a certain episode in one of my favorite TV shows, Leverage.  (Actually, the people themselves are in the whole show, but the characters they play are different in this one.  Confusing, I know, but we'll get there.) 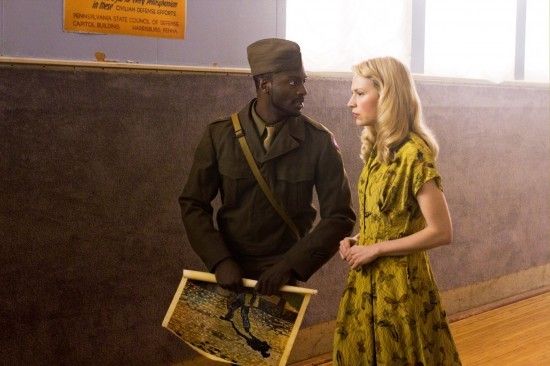 SO.  Basically, in this episode of my dear beloved Leverage, the team is protecting an elderly WWII veteran.  This veteran (played by Danny Glover, which makes the whole thing even more awesome) is believed to know the location of a van Gogh artwork which was lost to Nazis during the war.  Trouble is, Charlie (that's the veteran's name, is Charlie Lawson), has no intention of revealing anything whatever about the pice of art.  The reason the team is involved is that he is being harassed by Mean People who want the painting and "aren't very particular about how they get it," let us say.

Anyway, Charlie isn't talking.  Nor does he think much of the team's protecting him--he has a bit of an independence complex, you see, insisting that "he can take care of himself."  However, he notices Parker (she's the young white woman) and Hardison (the young black man)…together?  I guess?  Basically, he notices Parker grab Hardison's hand and Speak Earnestly to him, and Charlie wisely deduces that they are a couple (which they are).  He then cryptically declares that he will break his silence, but only with Parker.  (That freaks Parker out, because she's not good with people--or at least, she doesn't think she is.  It stresses her, dontcha know.) 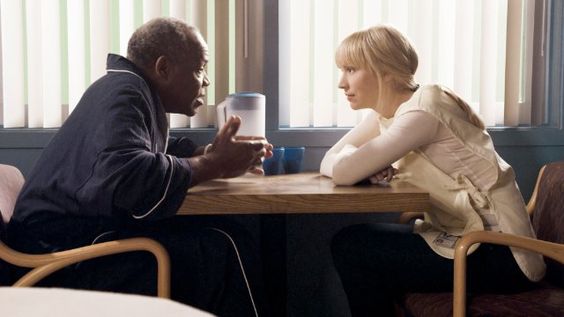 Since the only way to keep Charlie safe is to find out where the painting is, Parker has to listen to his story.  As he talks, he relates a love story--his love story--that took place in the 1940s.

Now, what the makers of L did with this episode (which I lurve), is they went back and narrated the story in flashback mode, but they had the actors who play Parker and Hardison play younger-Charlie and his love interest, Dorothy Ross.  AND GUYS IT IS SO PERFECT.  I can't even.

Charlie tells Parker of his and Dorothy's relationship, and the problems they encountered as a would-be biracial couple in the middle of the wartime 40s.  "A black man making overtures to a white woman was literally a crime."

Dorothy and Charlie have known each other since childhood, and while both are now in love with the other, their romance can't really blossom (getting sappy now, Olivia) because of the senseless prejudices of their time.  They love being together--they hang out at the roller skating rink (is that what it was?) which Charlie works and Dorothy frequents.  They tell each other their secret longings and ambitions, their frustrations with the way others expect their lives to be.  (Oh, and can we just talk about some of those lines?  "Oh, they still let me in the library."  I MEAN.  HAS THE MAN NO FLAWS.)

After Charlie "slips up" during one of their French lessons (he teaches her French, y'see, and it's like the cutest freakin' thing ever) and suggests that maybe they can visit France together someday, he (understandably) panics, because he knows that he could get into deep trouble for it if Dorothy's father somehow finds out.  Turns out, Dorothy's father does know, and he sends some thugs to gang up on Charlie.  But they are stopped by the town's sheriff, a.k.a….Nate.  (I know.  'Tis difficult to take him seriously.)  The sheriff-whose-name-I'm-forgetting, like his Leverage counterpart, is just the slightest bit of a control freak invested in people's decisions, shall we say, and he warns Charlie of the dangers of "making eyes" at a wealthy young white woman, and plants in his mind the idea of enlisting in the army to try and gain the respect of Dorothy's father.  Maybe, just maybe, if he distinguishes himself in service to the country, Mr. Ross would consider him an equal--at least, worthy of consideration.

So off he goes to war (WITHOUT SAYING GOODBYE TO DOROTHY), leaving his lady-love somewhat in the lurch (I have to throw in a tiny bit of levity to keep from constant crying, you see, because this episode is very high on the feels, which I'll get to by and by).  While in the war, Charlie does a certain something which is Rather Good, but the recognition goes to somebody else…solely because Charlie is black. 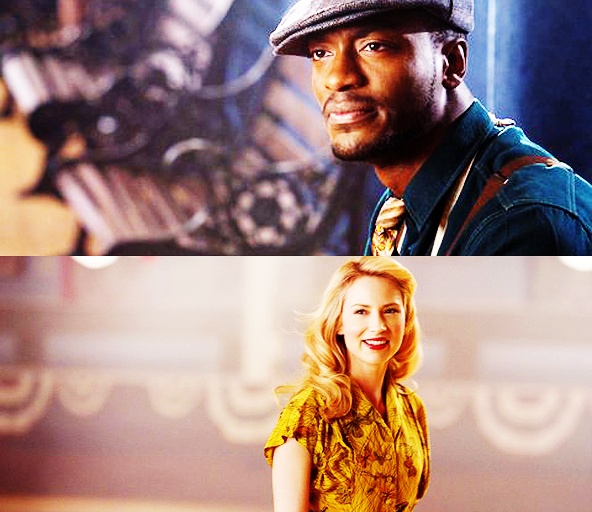 I gotta say, while Beth Riesgraf (Parker/Dorothy) is enchanting and also a very talented dramatic actress in this episode, Aldis Hodge's (Hardison/Charlie) acting is what really stood out to me the last time I watched this episode.  The scene in his military superior's tent is phenomenal.  Just…wow.

Anyway, Hardison's group was ambushed, and that's when Hardison did the Rather Good thing.  After doing said thing, he discovers a painting on one of the dead Nazi's person.  When he is cruelly brushed aside from the recognition he deserves for saving the group--that was what he did--Charlie decides to return to America and see if Dorothy will agree to elope with him.  They can use the money the painting will bring to live, is Charlie's idea.

He comes back.  And that sceeeeeeeeeeeene.  "The first time I saw Dorothy after the war, it was like she was floating on air."  GAAAH MY HEART. 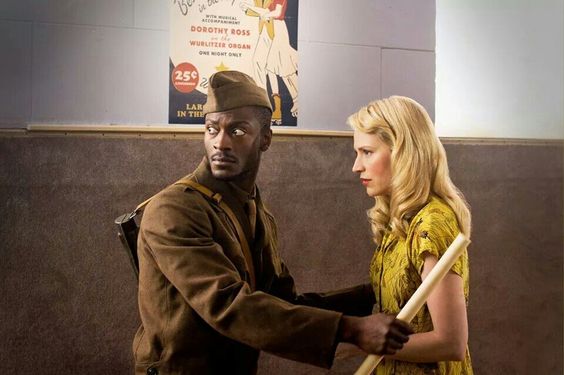 Understand, now, they have never explicitly said anything to each other about their feelings.  They've never said, in so many words, "I love you."  But it's there nonetheless--a real, deep, true love, one that has stood the test of racial prejudice, unjust parental opposition, status inequality, and a world war.  So when Charlie asks Dorothy to run away with him, she agrees, and they make their plans.

(While all this is going on in flashback, the team, in present day, is trying to find out the whereabouts of Dorothy Ross and and the lost van Gogh.  Just so we don't get lost.)

Dorothy is scheduled to play the pipe organ at the rink that evening, so the lovers enlist the help of Dorothy's aunt, alias Sophie, who is coincidentally married to Nate's sheriff.  At an opportune time, when everyone is distracted by the skaters, Dorothy and her aunt switch places at the organ, and Dorothy slips away to try and meet Charlie.

Note:  From here on out, I'm going to be discussing the ending.  So, spoilers, dontcha know.

Charlie is to meet her outside the rink, and they are to make their way to the railway tracks (nothing good ever comes from railway tracks *scowls*) and jump a train.  Through a series of circumstances, though, Dorothy has come to realize that her father will never stop hunting them down if she goes with Charlie.  He will track them down, wherever they go, and he will hurt Charlie.  He'll probably kill him. So she can't go with him.  *cue the bullets to the hearts of all the watchers*  Charlie, in a nocturnal scene absolutely brimming and overflowing and piercing with feels, entrusts the van Gogh to Dorothy, makes her promise to keep it safe for him.  They finally have one tearful, all-too-brief kiss, one hand-clasp, and then Charlie says goodbye to his Dorothy and jumps the train.

(Back in the real world, other issues are resolved, and that's all fine and dandy.)

Parker is crying for Charlie and Dorothy (Dorothy died three years before Charlie returned to the town after the railway goodbye), and Charlie tells her not to.  He says, "I've had an extraordinary life."  (But it wasn't with Dorothy and my hormonal adolescent heart can't handle it.)  And then he encourages Parker and Hardison in their relationship, and it's very gentle and bittersweet and understated.

I like this episode.  I wouldn't re-watch it very often, because it is very heavy, very un-Leverage-like, but it's good.  It's emotional and sad and beautiful, and, because I don't want to end on such a heavy note, here's this, because this is cute: 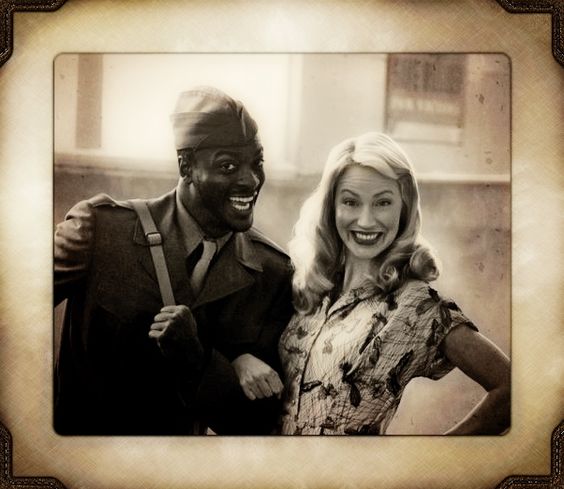