March 10, 2016
*solemn voice*  Angels, the time has come.  My feelings will not be repressed; you must allow me to tell you how ardently I admire and love this movie.

Which movie, you ask?  Well, assuming, for the purpose of including cheesy and overdone preambles to reviews, that you did not actually see in the title of the post, I'm finally here to review one of my favoritest of all favorite movies…Seven Brides for Seven Brothers!  And all the people said, "Amen."  (Heh.  Not.  In all probability, all the people groaned, "Lord in Heaven, spare us, we pray.") 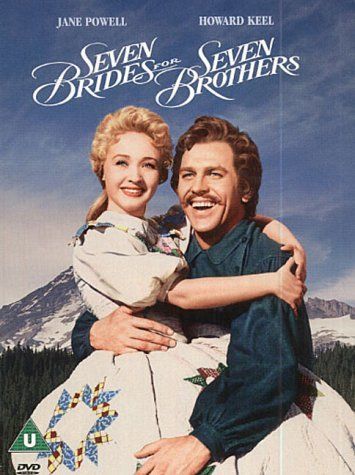 I'll be upfront about this right here and right now:  this movie is ridiculous.  It's silly and it's politically incorrect and there are multiple opportunities to say, "This is so wrong on so many levels," while watching it.  At least, that's the impression I've gotten from watching it with other people.  Me myself, however, well, I have to be honest.  This movie is one of my favorites of all time.  And I mean that.  If I were ever actually able to make a top ten list of movies, I'm almost morally certain this movie would be on there, and pretty high up on the list.

This movie makes me really, really, un-containably, irrationally happy.  So, in all likelihood, this review is going to be all over the place--full of pictures, inside references/jokes, references to other movies, and unashamed gushing about Howard Keel. 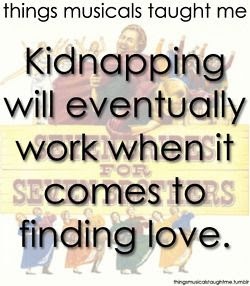 Okay, okay, first things first.  Setting.  Basically, there's this guy named Adam Pontipee.  This is back in the olden days, when the west was still being settled.  One fine day, he comes traipsing into town to trade his furs and stuff for supplies, and he casually mentions to the storeowners that he's also in the market for a bride.  Yep--this crazy backwoodsman actually intends to find a wife that day, marry her, and carry her back to his homestead in time for evening chores.  (He doesn't put it like that, but he doesn't put it much better.)  And you know what's even crazier?  It works.  After surveying "what the town has to offer" in his lordly fashion (which really means just walking around town noticing women and singing an unfairly catchy tune in his unfairly heavenly voice), he meets "the one."  Her name's Milly, and she's all "spirit and fire and dew," but also kind, hardworking, and, not to mention, beautiful.  Adam somehow persuades Milly to marry him (THAT DAY), and they do actually get hitched.  How he manages this I'll never know--it's not like he sang to her (which, it must be confessed, would earn him a heck of a lot of points in my book).  But anyway, Milly explains her feelings lucidly enough, and her guardians have no choice but to agree.  So Milly goes back with her new husband to his homestead.  What hubby failed to mention, however, is that he has six adult brothers…who all live with him on his farm.  (I can only suppose this is because they ain't hardly ever seen a girl before, and thus haven't settled down on their own.)  Milly is quickly and sharply disillusioned with the new life she's chosen, but does she complain?  Nope.  She buckles down and whips these seven rowdy mountaineers into shape, before letting them loose on society, changed men (or so she thinks). 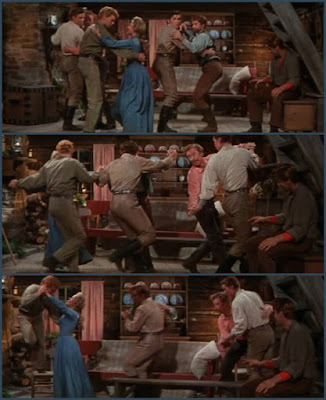 This movie has a lot of dancing and singing, in case you hadn't picked up on that.  There are so many rollicking, feel-good numbers in it--and that's one of the reasons I love it so much.  It makes me happy in a way I don't think any other movie has made me happy :)

Now, let's talk about Howard Keel for a moment.  We have to get it over with sometime ;)  I think you all know this, but Howard Keel is one of my favorite actors.  And yes, the greatest attraction is his voice, which is undeniably one of the greatest things I've ever heard in all my livin' life.  I also do have quite a bit of respect for his abilities as an actor--I've seen him in mostly musicals, 'tis true, but I also saw him in a more serious role in the John Wayne Western The War Wagon (which movie, by the by, is OH MY GOODNESS).  Admittedly, Adam is an idiot.  He's ridiculous.  He's insensitive.  He's slightly egomaniacal.  But for some reason, I adore watching him.  I think it's because he's fictional--I get to poke fun at how he just doesn't understand life, but I also get to laugh hysterically at his antics.  You can read more about why I love Adam here, but for now I guess I just want to clarify, if any of you haven't seen this (WHAT?!) and are considering doing so (yes do), that Adam Pontipee has serious issues.  The guy incites his brothers to go and abduct a bunch of young women.  But he's also really lovable and adorable and his voice is like legit the best and he changes by the end so it's okay anyway. 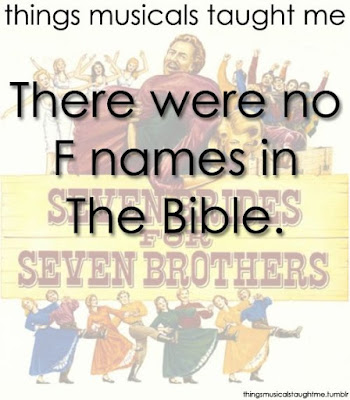 And since that came up, let's talk about the middle of the movie, yes? ;)

SO.  Basically, Milly has been, as I said, whipping these boys into shape (and believe me, they needed it).  Eventually, it's time for a barn raising back in town, and Milly is debuting the new-and-improved boys, hoping to get them a bit of a cultural experience. (And also to know how to treat girls.  Because--and take careful note of this--offering a girl a "chaw of chewing tobacco" is NOT how to treat girls.  Grabbing her as if she were a flapjack is also a practice upon which society frowns.)  So off they all toodle to town in the wagon.  (That wagon is practically fathomless, by the way.  I hadn't thought about it before, had you?  Think how many people fit into that wagon bed by the close of the movie!)

Btw, Adam is a bit clueless (no surprise there) as to what Milly has been doing with the guys, and he's none too happy when he discovers that she's "turned them into a bunch of mama's boys." BUT, he's powerless to stop the course of true love (of course it's true love if you see a girl and have an epic-beyond-all-description dance with her and then spend your chore time lamenting your loneliness, you silly cynic), and boy meets girl, boy dances with girl, and boy and girl apparently fall into, if not love, very deep like.  (I am using a positively horrific number of run-on sentences and parentheses in this review.  Apologies.)

Speaking of that epic-beyond-all-description dance scene, I'm going to include it for you, because I love you.  And because this scene is probably my favorite scene out of the whole movie (maybe--I don't know--I can't decide!).  So, here 'tis.  "I defy you not to roar."  (I don't actually know what that quote is from, can anyone enlighten me?)

Clearly, I'm finding it hard to blog about this wacky, exuberant, beautiful burst of glory that is SBfSB, but I will say I'm having fun trying ;)

Also, I feel like I should mention Milly.  'Cause that woman. 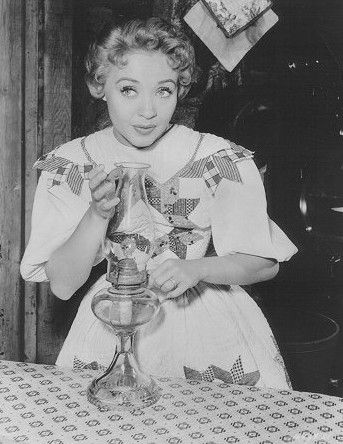 I aspire to be Milly when I grow up.  Yep.  I say that most times I watch this movie ;)  See, I love her, because while she does show a sliiiight *ahem* lapse in judgment when she marries a guy about twenty minutes after meeting him, when she gets to the farm and finds her dreams are going to be unfulfilled and her life is going to be very different from what she anticipated, she doesn't sit around and mope.  She settles into her new role and doesn't complain.  She knows when to be firm and when to be gentle; she knows when to refuse to tolerate the guys' idiocy, and when to be understanding.  So, yeah.  Basically she's flawless :D

So here's a spoiler:  Adam's idea of "talking" with his brothers is to brainwash them into abduction.  Mmhmm.  After the barn dance/raising (which turned into a total fiasco when all the men decided they needed to prove their manliness by having a good ol' cat fight), Adam's brothers are depressed, because they like the girls they met a lot, but they know the girls' fathers (to say nothing of their plentiful admirers) would never let them marry them.  So Adam, being the sage and goodhearted big brother that he is, in essence tells them that if you can't get them legally, why not go and kidnap them?  After all, the Romans did it, and they were paragons of civilization.  Here's what happens:

(I included that video because this scene is my second favorite in the whole movie, if not my first.  As you know, I'm indecisive.)  Now, clearly, this is ridiculous and wrong and preposterous, but you know what's really sad?  I find it absolutely, irrevocably hilarious.  I mean, LISTEN to the LYRICS in that song.  They're pure gold--pure sexist/wrong/stupid/pernicious/amazing/amusing gold.

And SPOILERS it all ends up okay, because during the months that the girls are stuck up in the cabin (Milly forthwith banished the boys to the barn--in one of the very few actually serious scenes in the movie), they fall in love with the boys and forgive them, and all's dandy and happy.  And then spring comes, "the pass is open!", and the cavalry rides to the rescue, except that the girls no longer want to be rescued.  "It's all quite entertaining," but I really need to get off the computer, so I'm going to wrap it up.  Let me just say that the ending is happy and golden and I loves it :)

Quick note as to content:  It's fine, really, but there are some veiled innuendoes.  The bachelor brothers tease Adam the first night Milly spends at the farm, and there are just a few grins and chuckles from the six of them.  Also there's a scene in the bedroom itself (not a bedroom scene, though), which is a bit…odd.  I mean, they're married, so it's fine, and it's not like they show the beginning of anything, but…it's just an awkward situation.  I don't know how to explain it xD 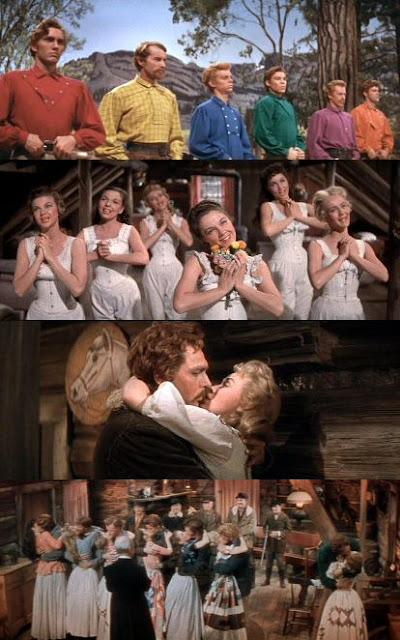 In conclusion (finally), this is one of my very favorite movies (you've said that already).  And you know what?  I never get tired of it.  Like, literally.  I've watched it more times than I care to try and count, and it still wholly delights me.  Adam's ridiculous sexism, Milly's boss-ness, the dances, THE MUSIC, the colorful costumes, the various romances (especially Adam & Millie and Gideon & Alice), everything.  I sometimes watch it twice in one sitting.  #trueconfessions (Actually, I usually just go through it selecting scenes, but still.)

This is my golden musical.  I loves it a whole lot :)