Dancing and Doughnuts {by Rachel Kovaciny}

August 31, 2018
[I received an ARC of this book in exchange for an honest review and am posting as part of the Dancing and Doughnuts world tour.  To see other posts in the tour, click here to see the full schedule.] 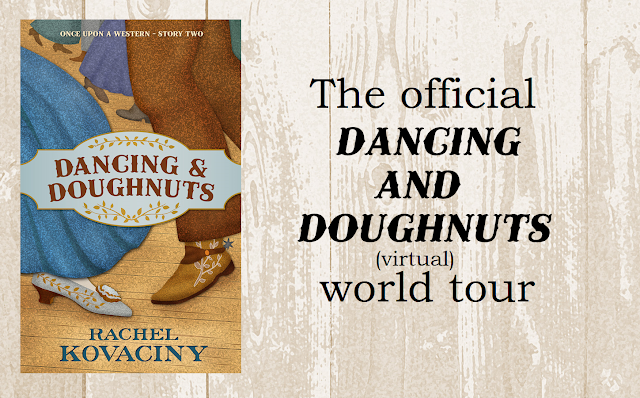 Dancing and Doughnuts has pretty much everything.  Plot, characters, humor, pacing, detail, and ATMOSPHERE out the whazoo.  It's wonderful.

Jedediah Jones is the epitome of a likable protagonist.  This guy was witty, responsible, and unflaggingly honest and chill.  He doesn't feel the need to put on a 'tough guy' façade -- or any façade at all, for that matter.  He is who he is and he knows it and he's cool with it and he's not super interested in protecting himself from other people's judgments or digs or what have you and he's not irritating because he doesn't seem like he's trying to pass himself off as flawless or right all the time and can you say "breath of fresh air"?

Then we have the Algona girls.  Geez Louise, what a fun group.  I think it's good that Ms. Kovaciny didn't feel the need to develop every single one of the daughters, but instead allowed some of them to remain in general, somewhat anonymous, but always entertaining and contributive background roles.  Those Algonas who were developed were equally entertaining.  I think I enjoyed Clara, Felicity and Flora the most, because all three of them had the image of Beth Riesgraf surrounding them due to my (incomplete but still enthusiastic) knowledge that the author had cast that actress as one of them.  (Watch out for my author interview on Sept. 2 to find out which one! ;))  They were also fun characters in their own right. ;)  I couldn't say that Alice was what I'd call a favorite, but there's nothing wrong with her character, at all -- it's just that I personally found some of the other daughters more engaging.  But Alice was wonderful, too!

Trouble and More Trouble are fabulous supporting characters, too.  And I just found out that Ms. Kovaciny would cast Christian Kane as one of them, so any remaining bets are definitely off. ;D

You can kind of see the answer to the mystery coming, but I don't think that's necessarily a bad thing.  Sometimes people get too wrapped up in unpredictability and forget that predictability in and of itself is not at all a sign of poor storytelling.  (Then again, I'm a pretty firm believer in that assertion that there are only a few truly distinct stories, and that all other stories draw inspiration from them.  So I guess that's all up to you. ;-P)

The atmosphere is A++++++, y'all.  I still don't know how the author managed to find that golden medium between too much description and too little.  I LOVED the description of the dance hall -- from the first time Jedediah sees it and marvels at the painted wonderland to the opening of the first dance he witnesses, I love how the preparations are described.  I love how we can feel the shadows lengthening to plunge the dance hall into a peaceful and enchanting and inviting twilight.  Geez, I just love everything!  Everything is so well-written.

Dancing and Doughnuts is the second book in Ms. Kovaciny's Once Upon a Western series that I have had the privilege to read for review.  And, as you can (hopefully) tell, I was enchanted.  I was utterly satisfied.  This book is unassuming, well-rounded, jubilant, and just about perfect.

Basically: I enjoyed Cloaked; I loved Dancing and Doughnuts.

As part of the blog tour, Ms. Kovaciny is also hosting a giveaway, open to anyone.  She will draw a winner on September 9, and that winner will receive an autographed copy of Dancing and Doughnuts, a copy of Log Cabin Cooking, and a Once Upon a Western tote bag!  You can also enter the giveaway more than once, by visiting different tour stops.  Click HERE to enter!

Dancing and Doughnuts is available now!  Visit the author's Amazon page to get your copy!