YES, I have been pretty absent for awhile, and yes, there are reasons on which I may or may not elaborate in another post, we'll see.  (Short version:  two jobs + lack of inspiration + overwhelming desire to do nothing but surf Pinterest & YouTube and discover new movies and go thrift shopping = no blogging.) 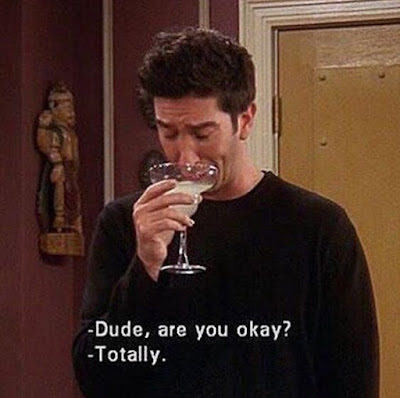 But anywho.  I only actually watched three new-to-me movies last month (heh), but luckily they were all good, and I'm rather obsessed with two of them.  So by all means let us rave about them. ;)

(Oh wait actually that's a lie:  I watched four.  The other one was Breathe, but honestly that one was disappointing due to how it ended.  But, on the other hand, that may not have been the movie's fault . . . I'll discuss that one super briefly after I talk about the other ones.) 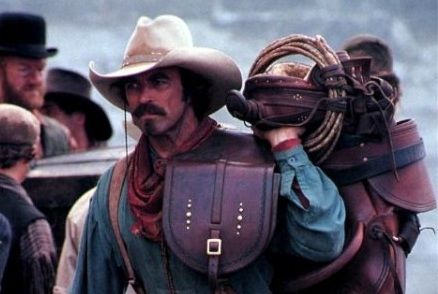 [To be honest, my obsession with this one has marginally subsided due to the adoption of a new craze (more on that in a minute *ahem*), BUT STILL IT'S SO GOOD AND I'M SO GLAD I GOT TO WATCH IT.]

Like, y'all.  It's flawless.  IT IS A FLAWLESS WESTERN.  (Well, they could have left out the few uses of God's name in vain.  Other than that, I'm pretty much good with it all, though I'll mention other content concerns at the end.) 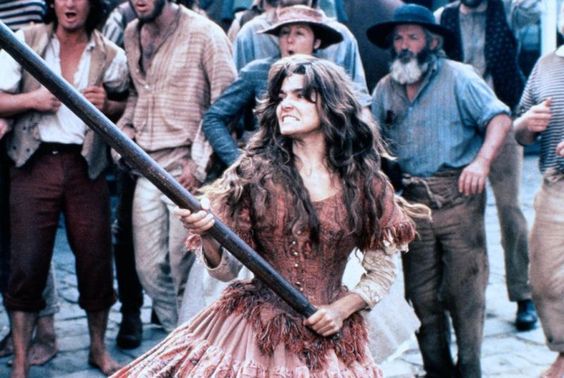 FIRST OF ALL THE HUMOR IS EVERYTHING.  But so is the drama, and guys, I don't know how they pulled off both at the same time?!  It's by turns hilarious and horrifying, and neither seem insincere or invalid.

The romance is shippable, but more than that, it's interesting.  The character of Crazy Cora is so layered and I love it.  [The parts when it's Quigley and Cora and the baby were so cute.  They were like a little family. *sniffle*  (Also, speaking of, the baby though?!?!  FEELINGS WERE FELT.)]

The music is wonderful -- very Mag7/general old Western-esque.  I am a fan.  *nods*

The three main actors -- Tom Selleck, Laura San Giacomo, and Alan Rickman -- are all Amazing with a capital A. 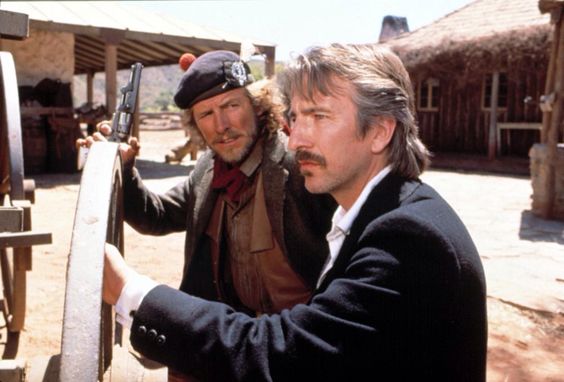 Content warnings:  Some implications of prostitution.  "Flirting" and "will they or won't they" between Quigley and Cora (we never actually see anything happen between the two of them and it's not really implied that anything does).  A good portion of the movie involves indigenous Australian aborigines, who are shown almost naked, so there's a good bit of nudity, including female nudity.  It's definitely non-sexual, but is probably a little shocking to most of us over here in 21st-century America. ;)  A good bit of language, too, including the GD word.  Lots of shooting, as per Western usual, but it's not really gory, though blood is shown at times.  Some other violence including people being herded off the side of a cliff and a scene with wild dingoes that's a little gross for about two seconds.  (Also, you can kind of see the gore in that scene coming.) 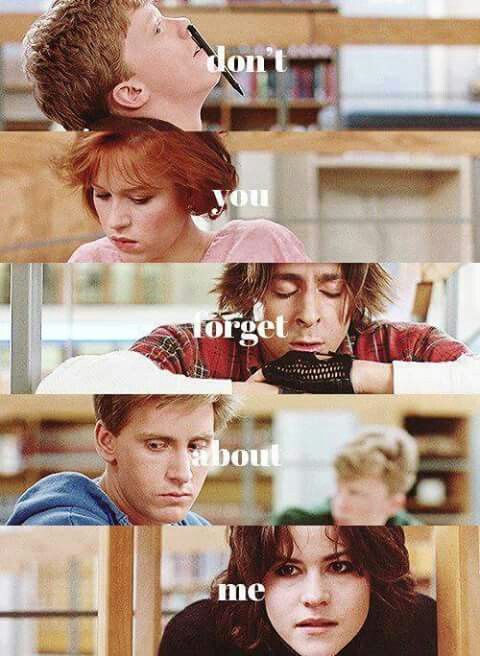 I finally watched it!  And all's I can say is it's a classic for a reason.

Is it a classic brimming with profanity and sex talk and teen drug use?  Yes.  But it's still good.  I'm still glad I watched it.  Because, you know, I can't really relate to a lot of what these characters were going through -- I never felt those things from my parents -- but something about the general understanding that life can be tough and that sometimes, as a teenager, you don't know how to handle it and it just really kind of sucks . . . something about that did strike a chord.  Something about that was cathartic.

And I think it's an important movie even for that very reason:  I can't necessarily relate to the specifics of the characters' struggles, but a lot of teens can.  I think the film really sheds a light on how countless teens feel, and it's eye-opening, and it's important for all of us to have our eyes opened, whether we can specifically "relate" or not.  I guess what I'm trying to say is, it's a movie that could do both:  either provide empathy or cultivate sympathy.  Know what I'm saying? 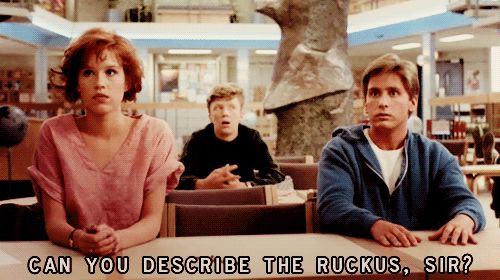 Moving on to "the fun stuff" . . . I go back and forth on the couples.  *QUASI-SPOILERS!*  I mean, I understand why Hughes did it the way he did it, and on the one hand, I love it.  It's awesome.  But on the other hand . . . I kind of would have been down for Bender and Allison??  Like, I kind of just wanted to see that big, tough, caustic gangster wannabe fall head-over-heels for the basket-case and become 3000% invested in protecting her with every ounce of his angst-ridden rage.  You know?

Bender himself was a really interesting character.  Far too vulgar-mouthed, my precious child, but still.  And when he finally actually smiles -- like, really, defenselessly, guilelessly smiles -- well, I mean to say, it's rather Affecting, Jeeves.

One thing I also noticed was how they portrayed "the athlete" and his problem.  Like, he had bullied someone, but instead of focusing on the pain of victims of bullying (which is a very important issue to address, to be clear!), the movie explored what it might be like for a remorseful perpetrator.  And I really liked that -- I like it when stories show that even if a person has committed a crime that many of us might be tempted to consider unforgivable, that doesn't mean that they're beyond the reach of redemption.  I'm big on redemption angles in stories. ;)

(Also, it actually didn't have as much language as I thought it would??  I mean, don't get me wrong, there's a TON; but I guess I thought like every other word out of their mouths would be an F-bomb.  Which wasn't necessarily the case, so that was nice.)

Content:  Pssh, everything?!  ^^ ^^ I can't do a content review for this one, guys -- way too much to get into.  You'll have to research it for yourself (Common Sense Media and IMDB are my go-to content review sites) and decide if it's something you want to see. 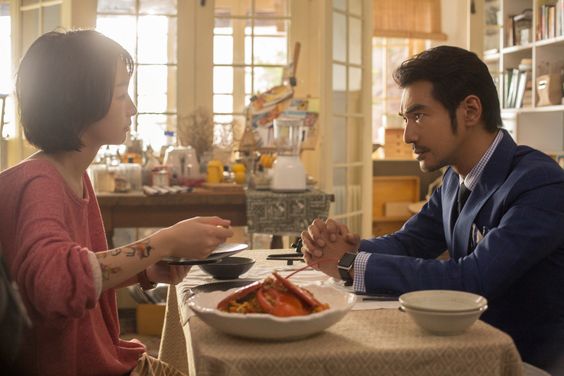 OKAY SO THIS KIND OF GAVE ME ALL THE GOOEY FANGIRLY FEELINGS.

I came upon it completely by chance, and I'm very glad I did.  I'm not usually into foreign language films because reasons, but man, I liked this. ;D

I guess I'm kind of a sucker for relationships, be they romantic or otherwise, in which one Precious, Energetic Puppy slowly worms their way under a Crusty McCrust's skin and into their heart?  I will say, though, that I don't think this particular couple would be for everyone.  There are some things that Jin does that even I'm not nuts about -- things that seem a bit too . . . domineering isn't quite the right word and doesn't paint quite the right picture, but somewhere vaguely along that line.  Things that aren't really, seriously addressed as possibly not the healthiest starting point for a relationship.  But then there's growth and development and change to his character, too, so I don't know.  Either way, I still came away from it with a smile, inside and out. ;)  (I mean, y'all, he found a place for her to watch the sunset.)

(AND THE SCENE WHEN THEY'RE SHOUTING AT EACH OTHER THROUGH THE DOOR IN THE MARKET.  I HAVE SQUEE.) 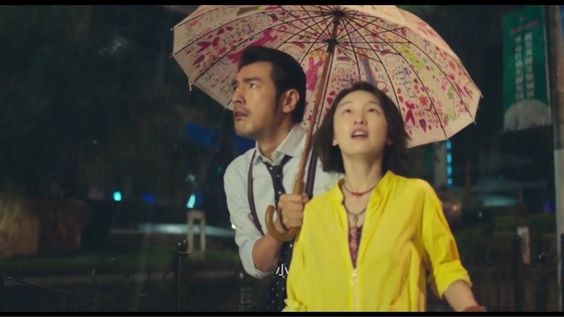 In the interest of cultivating balanced critiquing skills, I'll admit that there was a little too much slow motion used and I was confused by the random dance breaks in the egg-making sequence. *confused face*  The animation in the blowfish scene was . . . different.  I wasn't nuts about the inclusion of it in this particular film, but hey. *shrugs*  Other than that, though . . . *thumbs up*

This was really good -- until the end.  And then . . . Moral Conflicted-ness happens. :-/  Even then, though, it's still technically well-done . . . I just don't know how I feel about the stance the makers took on the decision made at the end of the movie.  Because, for one thing, it'd be kind of unreasonable to expect filmmakers to change history to make it more palatable -- and for another thing, it IS thought-provoking.

Let's just say that this movie doesn't end the way you may expect it to.

What have you been watching recently?