Tolkien Blog Party || "Dark is the Shadow, and yet my heart rejoices." {Women of Middle-Earth} 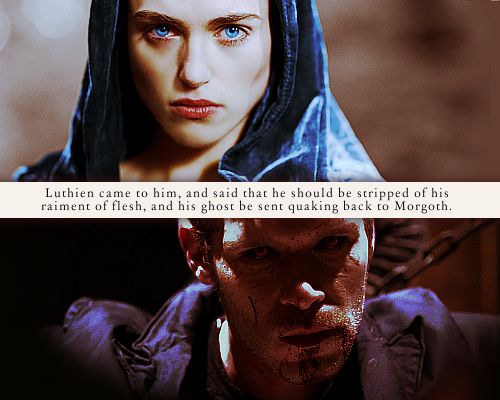 One of the things I've realized about myself over the years is that I don't usually go so much for stories that have an overly extensive cast of characters.  I prefer authors or screenwriters to focus on a small group of people and really dig into them, rather than touching on a dozen or more "semi-protagonists".

The Lord of the Rings would be one of the exceptions to that. ;) 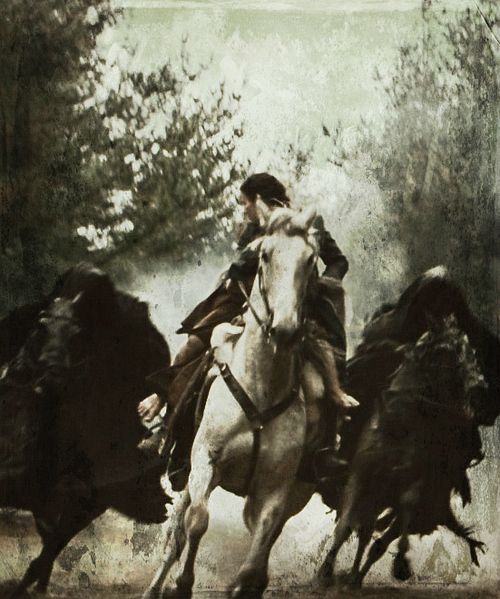 There are plenty of male characters in Tolkien's universe (and wonderful male characters they are, too); the female characters are slightly scarcer, at least in The Hobbit and The Lord of the Rings.  I believe Tolkien has come under fire for that, actually.

But I don't mind it, because ⎼ I would argue ⎼ the women that Tolkien does write are just as three-dimensional and complex and integral to the plot as the men with whom he populates Middle-Earth.  And in this essay I will prove it. ;-P

I can't touch on every single secondary character who's mentioned in the appendices (or *cough* The Silmarillion *cough*), so I'll focus on what I'll call The Big Four: Galadriel, Arwen, Goldberry, and Eowyn. 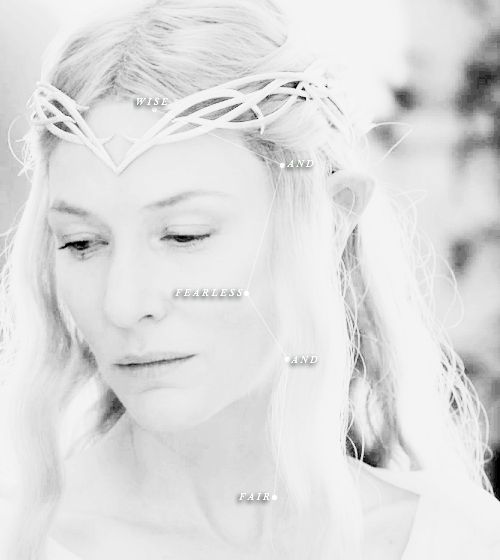 Throughout all the time we know her, from The Silmarillion to the end of The Return of the King, Galadriel struggles with power-hunger.  She wants control.  She wants dominion.  She wants majesty and acclaim.

Those are some severe flaws to integrate into one of your "good characters," y'all.  They're not halfway admirable, like some.  They're thoroughly wrong, thoroughly scary.  (And not in a glamorous way.)

[Which, coincidentally, is just one of the things to love about Tolkien.  He was not afraid to give his characters weighty and consequential issues to resolve within themselves.]

And yet, Galadriel is able to control herself.  She does not become a spotlessly pure individual, but she chooses right over wrong even when a part of her might truly still prefer wrong.  She knows, deep in her spirit, which contending force inside her soul is best, and she chooses to defer to it.

Frodo bent his head.  "And what do you wish?" he said at last.

"That what should be shall be," she answered. 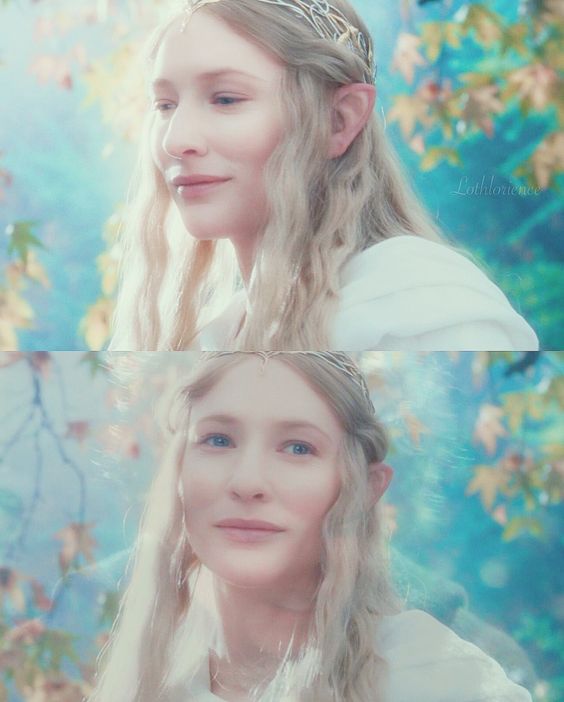 Galadriel gives to the Fellowship succor mixed with truth.  She knows they may not all live, and she does not pretend their task is easy or safe.  But she helps them insofar as she can, without exploiting or manipulating their own free wills.  (She does not accept the Ring from Frodo; she does not bend Boromir's mind to her own ends; etc.)  Out of the bounty of Lothlorien she chooses gifts that will aid each member in unique ways.

She stood before Frodo seeming now tall beyond measurement, and beautiful beyond enduring, terrible and worshipful. Then she let her hand fall, and the light faded, and suddenly she laughed again, and lo! she was shrunken: a slender elf-woman, clad in simple white, whose gentle voice was soft and sad.

"I pass the test," she said. "I will diminish, and go into the West, and remain Galadriel." 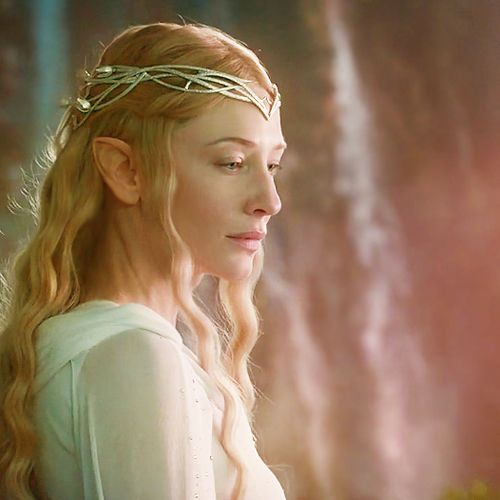 And she does.  She recognizes her current role in the drama of her world, and she accepts it. 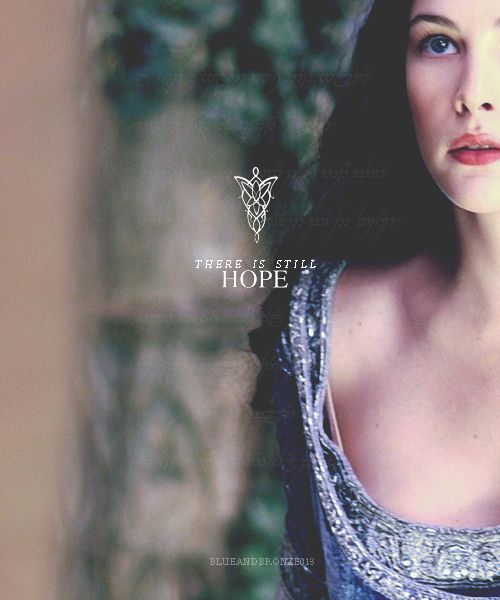 Arwen's contribution to the trilogy is slightly subtler.  She makes very few appearances in the books themselves, but I don't find Jackson's inclusion of her in the films to be far-fetched.  (I mean, yes, he does steal the whole "whisking Frodo away from the Ringwraiths to safety on a white horse" thing from that other guy and give it to her, but still.)  One of the most central players in the story is Aragorn, and one of the most central influences on Aragorn and Aragorn's behavior is Arwen.

Arwen embodies the women left behind during war.  She embodies the faithfulness, the sacrifice, and the motivating spirit of those whose loved ones must go far away to fight for sacred and ineffable values.

And, more specifically, we mustn't forget that she is the one who, by giving up her immortal birthright and staying behind when the last elves left Middle-Earth, provided a way for Frodo to travel to the Undying Lands and be healed.

I really like her, but I may delve more deeply into her character in another post, so for brevity's sake that is all I will say about her right now. 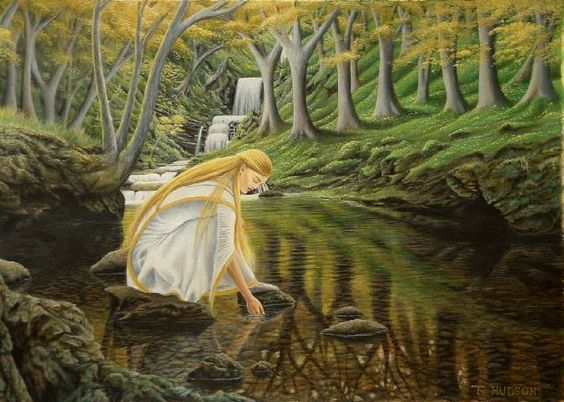 One of the things I love most about the books that didn't happen to make it into the movies is the time the four hobbits spend with Tom Bombadil and Goldberry in the Withywindle Valley.

Then another clear voice, as young and as ancient as Spring, like the song of a glad water flowing down into the night from a bright morning in the hills, came falling like silver to meet them . . .

Goldberry is so important.  She sends the travelers off with optimism for the road ahead, but also for the road back.  If they succeed, not only will the world be saved and high truths reclaimed; perhaps there will even be beauty closer to home.  Perhaps there will be refreshment and joy and deep-running gladness that produce goodness, even in a place as lowly as the Shire.

Goldberry, like so many other ladies in Tolkien's canon, represents a purposeful detachment from the horror that threatens.  She represents defiant hope. 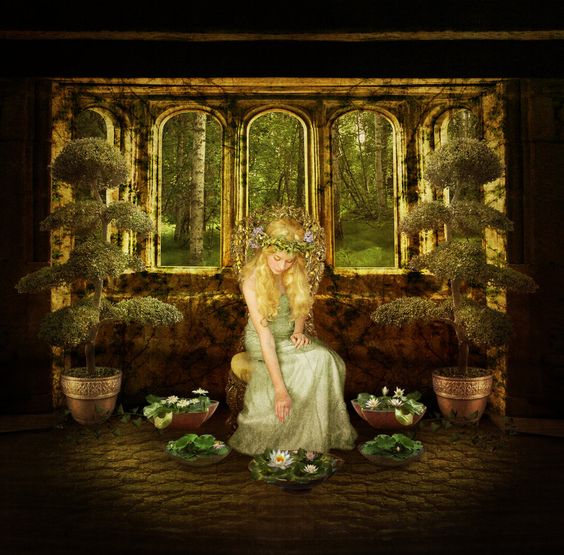 [Frodo] stood as he had at times stood enchanted by fair elven-voices; but the spell that was now laid upon him was different: less keen and lofty was the delight, but deeper and nearer to the mortal heart; marvelous and yet not strange. 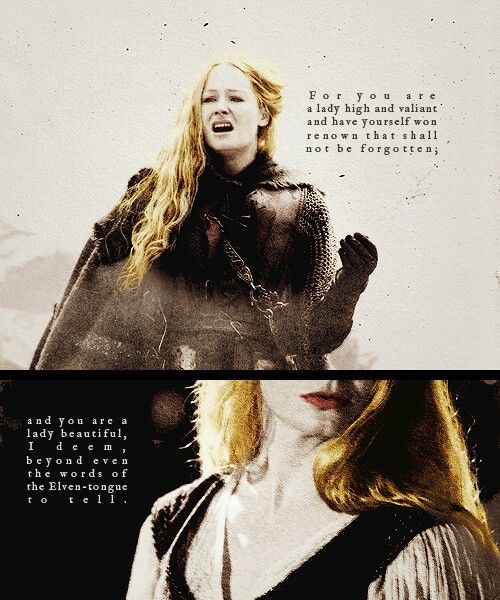 In Eowyn, Tolkien created a true warrior maiden.  She refuses to subscribe to a narrow definition of what she can contribute, but she does so with grace.  When the men in her government (and, coincidentally, in her family) dismiss her abilities and debar her from fighting for her country, Eowyn doesn't throw tantrums or openly defy them.

She just joins the army anyway.

That's not to say that she's without flaw or that her motivation is unclouded by selfishness.  She, like Galadriel, wants glory.  She wants valor in battle and will not be satisfied with valor in any other area.

But she is eventually willing to let go of her aspirations when they surpass the limits of healthy ambition.  Sometimes she needs a push from others to do so, but she does it.  And she realizes that she can use her courage and determination to mend instead of to fight, once the need for fighting has passed.

"I will be a shieldmaiden no longer, nor vie with the great Riders, nor take joy only in the songs of slaying. I will be a healer, and love all things that grow and are not barren." 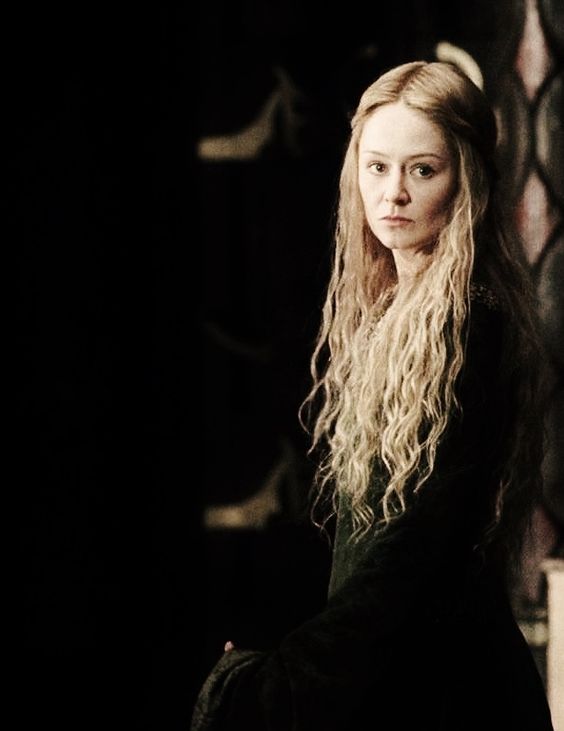 And these are just four of many ladies whose appearances in Tolkien's stories may be brief but are certainly memorable.  Luthien, Este, Tauriel, Rosie Cotton, Varda . . . there are several more, all worthwhile in their way.

What do you think of Tolkien's female characters?
Who is your favorite?
blog parties books Lord of the Rings movies ponderous ponderings The Hobbit Tolkien Blog Party