January 04, 2016
Hello, lovelies!  Here is a contribution to Heidi's epic Cinderella Week--I'm here to talk about the story of Ella Enchanted. 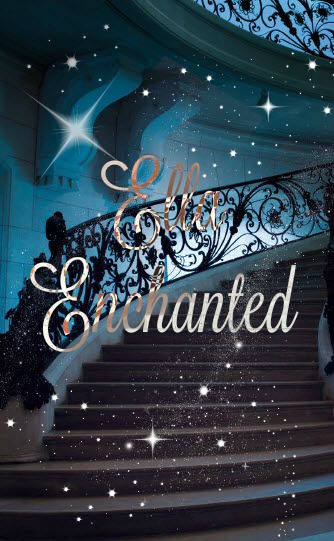 Let us jump right in, shall we?  Comparing the book and the movie, dontcha know.  Oh, and I watched the movie before I read the book.  (The order in which you experienced a story can have a great bearing on your opinions about it, can't it?)  Spoilers will be given free reign!!! 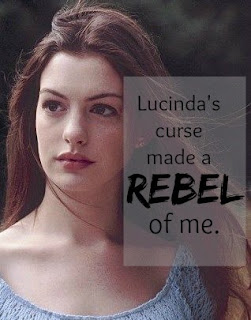 Now, Ella is not my favorite character, to be blunt.  She's okay, but she's a bit too…oh, what's the word…feisty isn't quite the thing…she's just a bit too--much for me.  Her personality doesn't jibe well with mine, and all that.  And she says practically everything she thinks (rather lacking in tact, what), which bothers me.  For instance, I know she sensed immediately that Hattie was insincere, and I know she was going through a lot at the reception to her mother's funeral (well, duh), but was it really necessary to say some of the frankly rude things she said to Hattie?  I submit that is was NOT.

But for all that, she has some strong points.  She befriends the unpopular, she's independent, and she sticks up for herself.

Given that I don't care for her that much as a character, I don't have a very strong opinion of which portrayal I prefer, book or movie.  I suppose, if I had to choose, I might like movie-Ella just slightly better, but that's probably because of Anne Hathaway.  So, yeah.  Movie-Ella also seems a wee bit calmer than book-Ella, if you get my drift.  Characters such as book-Ella make me feel kind of tense and defensive, but movie-Ella doesn't really do that to me.  Although…no, wait, scratch that.  They're about equal.  Gah, I don't know!  I'm indecisive. 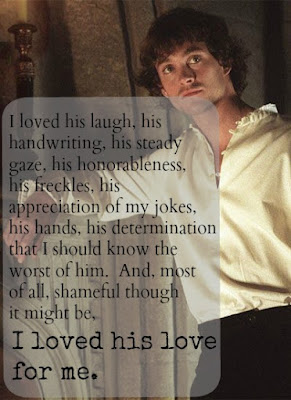 Char, though…Char I like *girlish grin*  He's a sweetheart.  I love how kind he is to Ella, and how much he loves her.

As to which version of him I like better…hmm, that's a toughie.  Movie-Char is a bit more serious and more "British" (hehe), while book-Char is obviously younger and a little more playful.  Hugh Dancy does a pretty good job of bringing out book-Char's character while putting a bit of a spin on it.  Especially given the major deviations from the book's plot he had to deal with *ahem*

Since there's no Evil Uncle Edgar in the book, Char isn't having to take sides in some sociopolitical issue; he has, by all accounts, a good relationship with his father and his mother, and he's agreeable to the idea of being king.  I think I prefer book-Char, but movie-Char is nice too.  ("Well, I thought that maybe this might be a good time to possibly have a little heart-to-heart…but now I'm thinking maybe I should just come back when there's been a little less drinking.")

(Wow.  That right there is literary critique at its finest...NOT.)

In general, I much prefer the book to the movie.  I'm sure those of you who've watched movie can probably understand why ;P  It's not that I don't like the movie, because I do, on occasion and if I'm in the right mood for it.  The problem is, that occasion seldom comes, and I'm seldom in that mood.  Where the book is simply but elegantly written, the movie is frankly cheesy, not to mention the crudity of the humor.  (The ogres' costumes…just…enough said.)

The book, when I discovered it after watching the movie, quickly became my absolute favorite book for a time.  I was irrevocably in love.  In fact, during one week-long family vacation, I read it at least two or three times, and was on the verge of beginning my third or fourth re-read when my parents intervened.

The writing style isn't ornate, but it's good.  Kind of reminds me of Kirby Larson's Hattie Big Sky, actually, but sprinkled with a touch of the glitter that comes from writing about a fairytale. 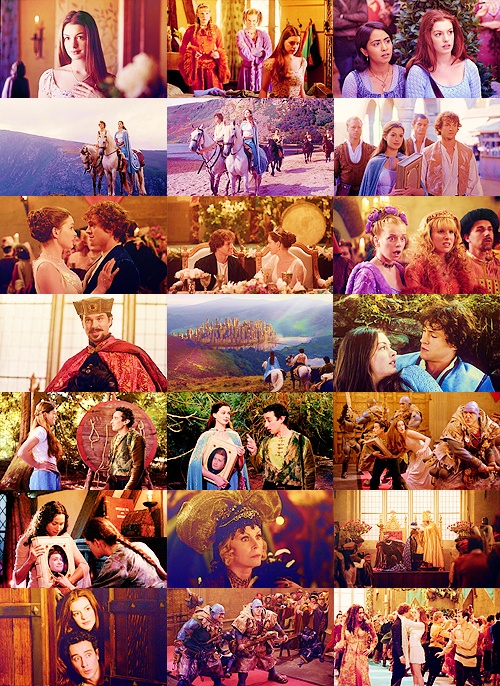 By contrast, the movie is…well.  Where does one begin with the movie.  On the one hand, it's a colorful, quirky, clever twist on the story.  On the other hand, it's just a twist.  There is almost no resemblance to the book's story to be found in the movie.  Char and Ella are more or less the same, but other key characters are materially different.  Take Hattie--um, what?!  I mean, I get that she's at heart a terrible person, but she was subtly cruel, not blatantly rude.  And personally, I liked that better in the book.  Also, Ella's relationship with her father isn't good in the book, but in the movie they're the best of friends--a change I do like ;)  Mandy is a beautiful, young fairy, instead of the rather old friend/cook/mentor of the book.  Slannen is a main character, instead of a one-time acquaintance who's invited to Char and Ella's wedding.  And they also throw in a couple completely unprecedented characters:  the Bad Guy uncle, Edgar, and Mandy's trapped-in-a-book boyfriend, Benny.  I…don't really see the need for these changes, but…okay.  I don't mind when a movie is a bit different from the book, especially as, like with this story, I often watch the movie first, but this is rather "the bally limit."  Seriously.

For all that, though, the movie does have some clever lines, some fun music, and it's mildly entertaining.  I really do enjoy it, when I'm in the mood for it.  (And I love Ella's wedding dress!  Before she…well, revamps it.)  It's got its strengths, and it's definitely got its weaknesses, let's just leave it at that, shall we?

From the book, I absolutely LOVE the part at Sir Peter's and Lady Olga's wedding, when Char and Ella hide away and go exploring, and they find the slipper, and slide down the bannister.  IT'S JUST SO CUTE.

From the movie…well, I have to say, I'm a sucker for big song-and-dance numbers at the close of a film, so I kind of like the end ;)  Even though it's silly and a bit *'hem* much, I gotta admit that I enjoy it.

Final decision?  The book wins, hands down.  It's simple, intriguing, cozy, nostalgic, witty, and just generally delightful.  The movie has its strong points, but overall it's a bit too cheesy and at-times-crude for my taste *primly*

This is one of my very favorite stories (at least, book-wise), and I've enjoyed discussing it with you! :) 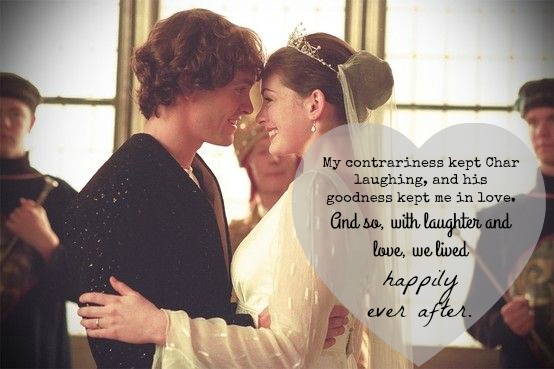 Be sure to check out Heidi's blog for more awesome Cinderella goodness throughout the week!  Also, Hamlette is hosting a STUPENDOUS couple of giveaways, too.  I plan to be returning with tag answers and a review of the 1995 Sabrina over the next couple of days, but I may do something else as well if I can't contain my excitement ;)