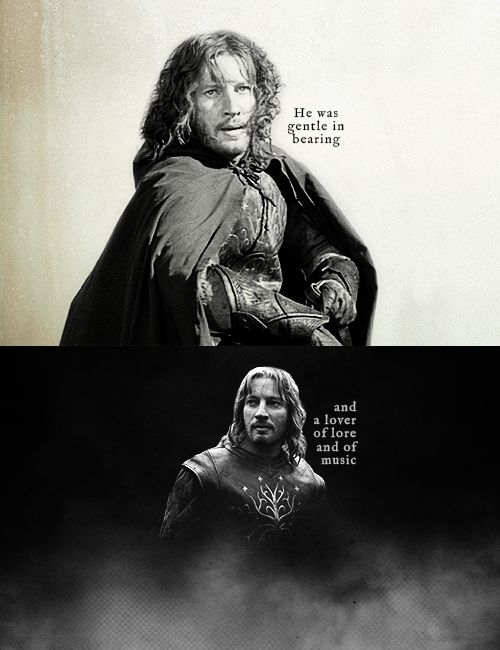 Some people are a little confused when they find out that Faramir is my favorite Lord of the Rings character.  Not only my favorite, in fact, but my favorite by a long chalk.

Just a little puzzled, you understand.  Not judgmental or contemptuous, just puzzled.

And honestly?  Up until about two days ago, I was still floundering a little bit myself as to why.  I knew that I loved him deeply and unchangeably and would protect him from all comers, but I didn't know--fully--why he had such a hold on my heart.  My general answer would be that I loved how he remained gentle and kind despite the emotional abuse his worm of a father dished out.  And, on the surface, that's still the answer.  But I just uncovered a whole new layer to that, and that's what I'm going to talk about today.

A couple days ago, I was flipping through my copy of The Lord of the Rings in search of quotes to use for my answers to Hamlette's tag; and I stumbled across this little exchange, and everything clicked.  I now understand why I love this character so much.  Here's the quote (Denethor has been talking with Faramir about his decisions concerning Frodo and the Ring):

[Denethor] "But in desperate hours gentleness may be repaid with death."

(That's from the chapter "The Siege of Gondor" in The Return of the King, if anybody wants to know.)

You see, I've recently figured out that gentleness and sensitivity and kindness and compassion are some of the traits that are most important to me.  On the flipside, one of the things I hate the most is when people try to stamp the softness out of other people.

As someone who is very sensitive--and who is learning that that is an actual thing and it's actually okay and it can actually *gasp* be good and productive and beneficial to society--I've experienced this a little in my own life.  Sometimes people try to get you to "grow out of" your sensitivity from good motives: they want you to be able to stand on your own two feet emotionally and take life's hard knocks without getting bowled over.  But, see, that's the problem: people assume that if you're too soft-hearted, you won't be able to do that.  People assume that gentle people are either weak and insufficient or naïve and untried. 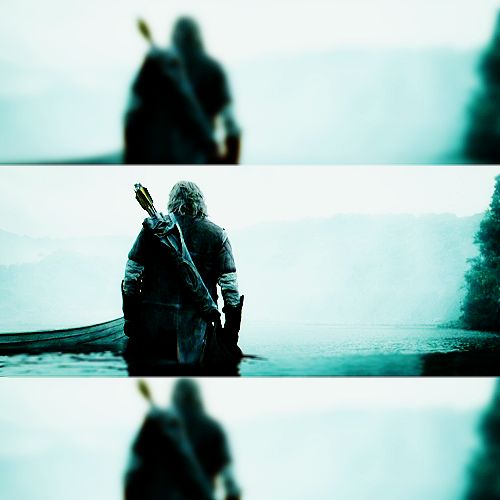 Sometimes, we "highly sensitive" ones know full well that our gentleness opens us up to vulnerability.  We know that not trying to strengthen our so-called "fragility" may end up mentally and emotionally wrecking us time and time again.  But because we believe that our specific "mode" of sensitivity is a trait that can be harnessed for good, we keep ourselves soft.

I think that Faramir is one of those people.  He has a very, very soft--not weak--heart; and despite best efforts from his father, he's self-aware enough to refuse to change that.  He knows that his capacity to feel deep pity and compassion for the hurt and the hurting is a GOOD thing.  He understands that gentleness is costly, but important.

I think it's worth pointing out that soft people are not necessarily soft because we've never been through anything truly hard. Faramir, at least, certainly isn't. Faramir has faced abuse and loss and national despair. He's a soldier; he's seen bad things. He knows that there is true darkness out there. He's not soft because "he's never had to be anything else".  He's gentle by nature, and he stays gentle by choice, when it would almost certainly be easier to be anything but.

He is someone whose character in essence says, "I know that keeping my heart tender will make it bleed.  I know cultivating such a deep well of compassion may mean that the darkness and pain around me will rip and tear and slice and mutilate my soul.  I know that staying gentle will hurt me, but I'm going to do it anyway because it's what I believe to be right.  Because it's how I know I can help."

Because to stay gentle in the face of what he goes through?  To guard his softness when literally everything in his life would be made at least 70% easier if he "toughened up"?  To nurture pity instead of revile it?  To cultivate kindness in a hostile atmosphere?  And to do that while being a respected, talented, and fully capable army captain?

I think there's strength in that. 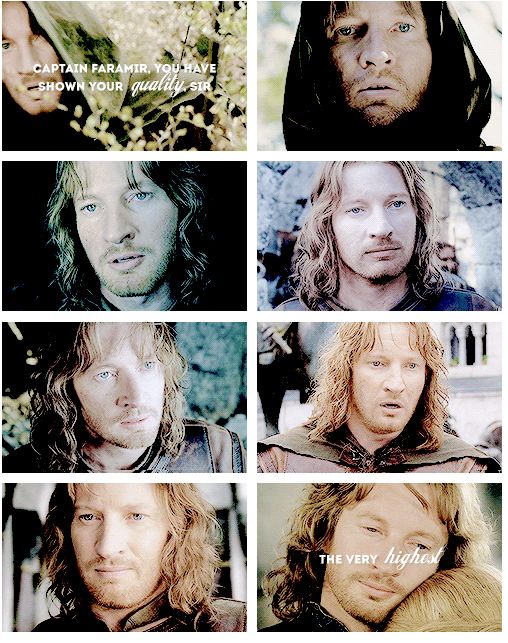