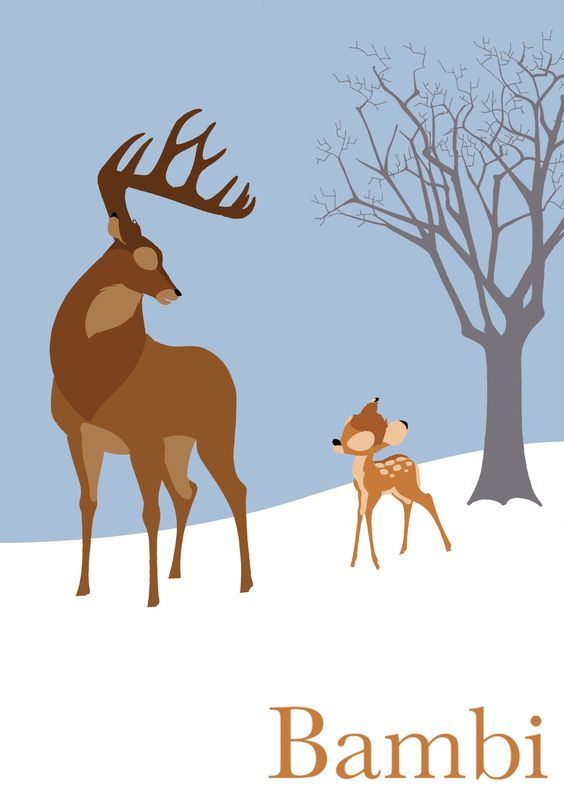 Bambi is that movie that everyone knows but few people--at least, so it seems to me--actually watch very often.  And I'm no exception: I think I watched this movie all the way through at some point very early in my life, but for the past fourteen years or so (at least), this film has been nothing but a pop culture reference to me.  Everyone knows about The Big Death, everyone knows that Bambi himself is the quintessential symbol of innocence or whatever, everyone knows about Thumper (and Flower) . . . but beyond those commonplace impressions, I had no real recollections of this film.  So when, several days ago, I checked it out of the library based on a somewhat impulsive whim to see what it was really like from a young-adult perspective, I didn't really know what to expect.  I hoped that I was steeled enough, even in my intensely defensive-of-all-animals heart ;), that I would not be too devastated by the aforementioned Big Death, everyone's declarations that it was a traumatic experience of their childhood notwithstanding.  I wondered what--if any--real plot there was to the movie.  I wondered if it would be rambling and pointless or sad and affecting.

What I found was what is definitely the quietest and most thoughtful of Disney's films.  (That I know of, at least.) 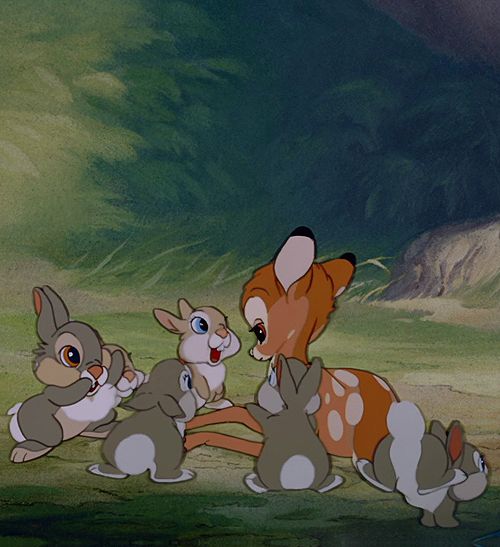 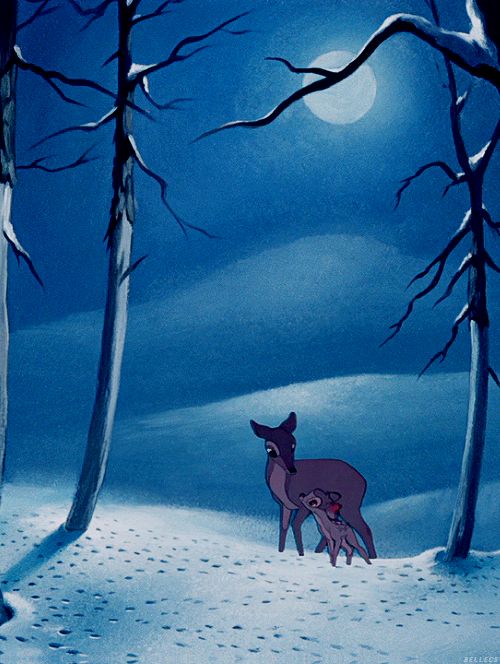 True, it isn't strong on plot.  The story is basically just a contemplative look at life for woodland creatures, and would not be very appealing to anyone except those who might be interested in hugely understated, even sparse storytelling that relies heavily on extended periods of silence and delicate visual canvases; or in cute little forest animals; or in both.

That said, for those who are interested, it delivers a unique cinematic experience.  (Wow, way to make this sound super serious, Olivia.)  The film compels you to settle and still, and to simply go along with its meandering flow.  It does have a slightly melancholic bent, but it has moments of springtime and jollification and color, too.

Aesthetically and visually, I found the movie very satisfying.  It's not afraid to spend a deal of time in silence, merely showing the viewer scenes of the forest.  It's a simple film.  It plays with light and shadow and depicts the change of seasons and the process of "coming of age" with a leisure that refuses to be hurried or imposed upon. 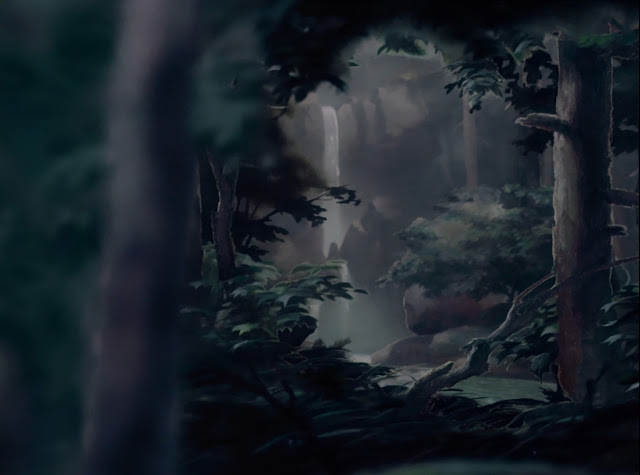 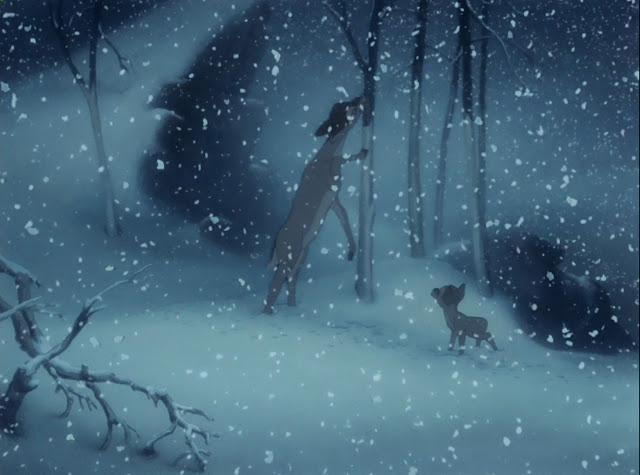 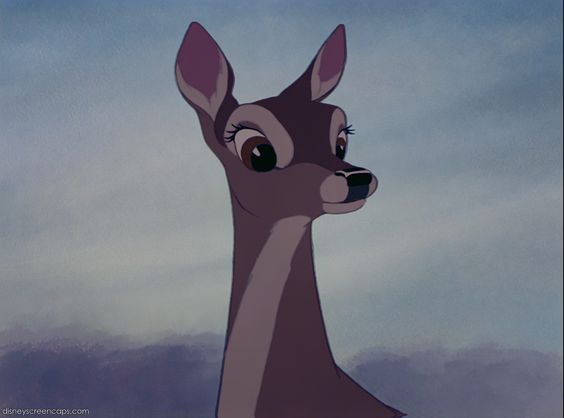 I especially liked all the parts with Bambi's mother, and just the way the makers portrayed the mannerisms and "customs" of deer in general.  As someone who has had the pleasure to see deer on a regular basis due to the location of my home, I like how the movie captures the timeless elegance and delicacy and strength of the animal.  Even though we see them all the time, my family and I almost always pause whatever we're doing and rush (quietly) to the window whenever one of us signals a deer sighting.  I think that's fascinating, personally.  For some inexplicable reason, deer have a hold on us humans.  There is such majesty in a buck, such nobility and courage in a doe, and such adorable innocence in a fawn that we just can't look away.  They're breathtaking creatures; and snarky hunting-related remarks aside, I think it's quite a little something that Walt Disney Studios devoted an entire film to exploring and celebrating that. 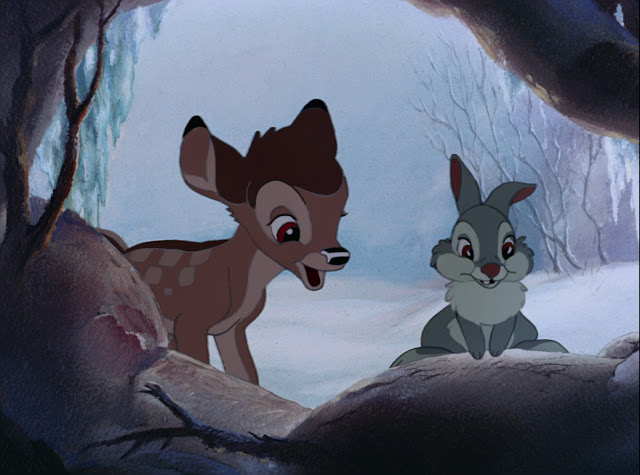 The Big Death does seem to be the climax of the film, with everything following after feeling like a somewhat extended denouement.  But even so, it was pleasant to find that it didn't end abruptly right afterwards, as I thought it did.  And it was nice to see Bambi and his homies grown and thriving (especially Bambi, after his Trauma), even if the series of scenes on "twitterpation" was honestly a tiny bit too semi-sexual for me, innocent and natural though all of it is.

The end is satisfying and closure-filled, rushed though it may be.  I was really quite pleasantly surprised by this movie, and I wager I'll be watching it again at some point.  It's just a kind of film that I find interesting--though, again, I'll reiterate that I don't think it'd necessarily be worth the watching time for everyone (or even for most people).  Ya gotta have the peculiar combination of interests that I do. ;D ;D 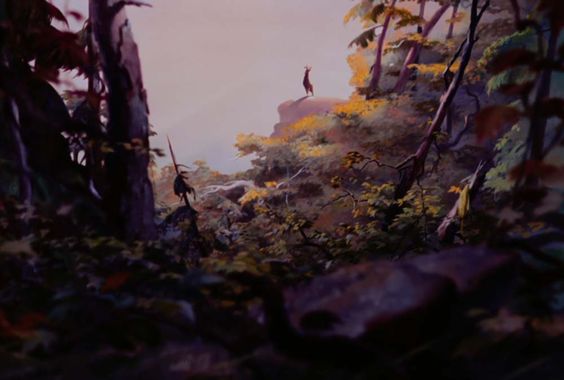 If any of you do, however; or if any of you are interested to rewatch a childhood movie from an older perspective; or if you're in the mood for a really quiet and somewhat thought-provoking way to spend an afternoon, consider Bambi.  (If for nothing else, then for all the cute widdle animals. <3 :)) 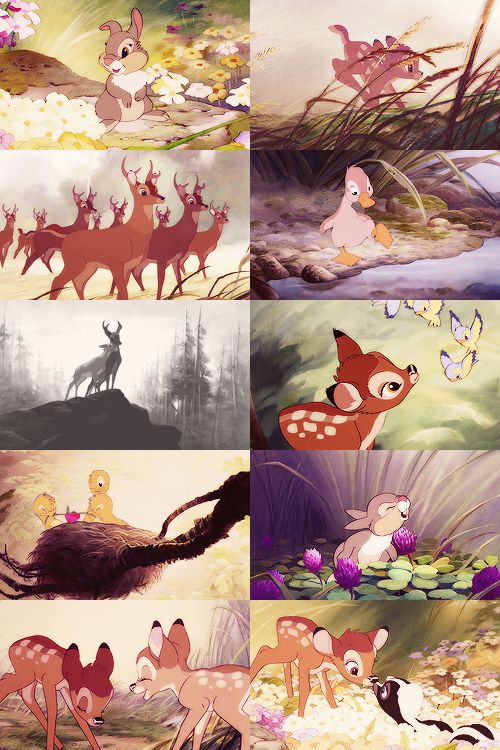