My own personal fictional cinnamon rolls. 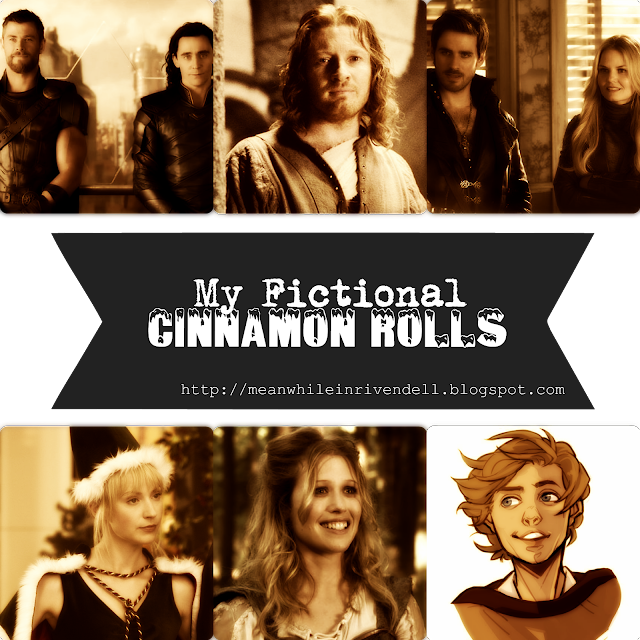 You know how when we talk about sweet or adorable characters and flail over them, we sometimes call them "cinnamon rolls"?  They're the characters that are A Little Something Special.  They're a little extra burst of sunshine and cuddles (or, depending on your bent, of storm clouds and flying daggers).  They're the ones everyone universally decides need to be protected from the big, bad world.  They bring this out of us: 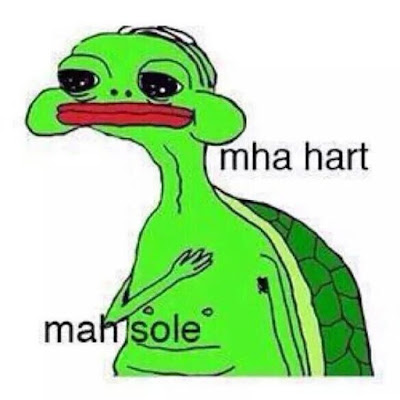 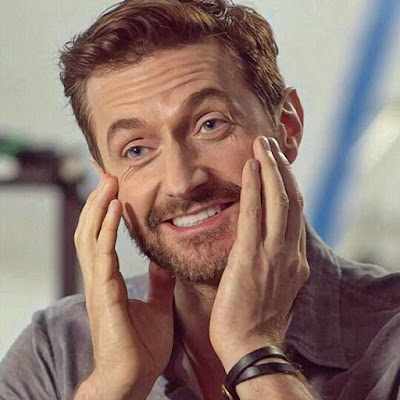 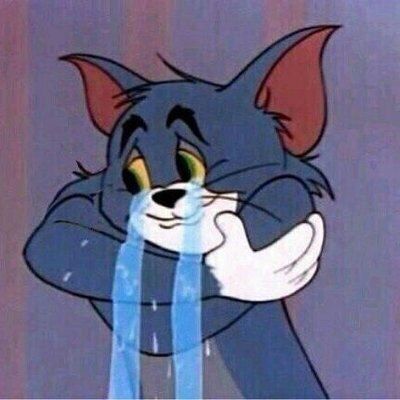 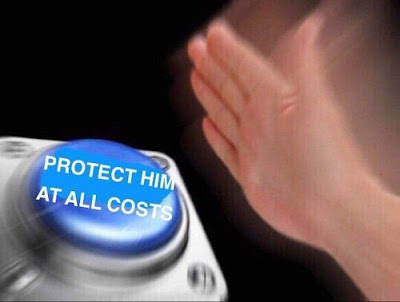 You get the drift.

They're like puppies, essentially.  (Or kittens, or baby otters, or whatever Small, Young Animal floats your particular boat.)  They're sugar 'n' spice 'n' everything nice.

Welp, as you can see, I decided to do a post about the fictional characters that have earned themselves the title of "my cinnamon roll".  There are lots of characters I love who are undeniably of the cinnamon-roll variety, but this post is dedicated to a small, core group of those whom I have claimed for myself.  These are the ones that I have taken it upon myself to appoint my especial wards. :-P  They're not necessarily my all-around favorite characters (although a few of them are); rather, they're characters who really embody this confectionary quality to me--the characters who spring to mind when I think, "Who are my cinnamon rolls?"

Thor + Loki
from the Marvel movies

Loki's been a favorite of mine since the first movie, but more recently Thor has snuck into my heart, too.  And the two of them TOGETHER . . .

Their brother dynamic is one of the most precious things in the Marvel franchise and it needs to be protected with all the passion of thousands of united fangirls.

And, to go on record:  they do need to address the magnitude of Loki's very real sins.  He has killed lots of people.  (So I'm told, I don't actually remember that much of the earlier movies lol.)  As much as I love my precious, hurting, confused son, he does need to own up to and repent of that.  It's just that I personally have faith that he will (even if they don't show it in the movies).

I am firmly convinced of Loki's redemption. :D

But anyways, to return to the brotherhood:  their bond is portrayed so movingly and humorously and heartbreakingly and I'M JUST A FAN, FAM.  The way Thor is blindsided by Loki's betrayal but then refuses to let go of the idea that he is still redeemable . . . *buries face in hands* 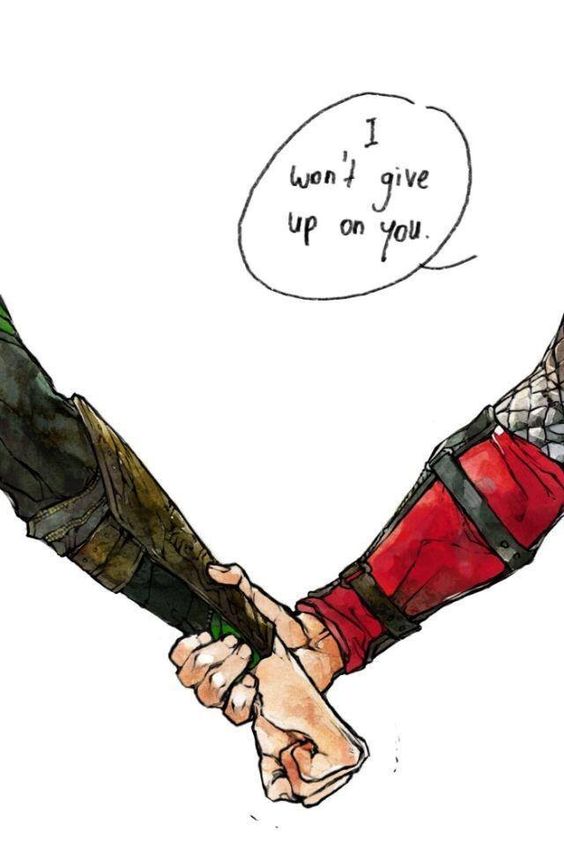 Plus, of course, THEIR BANTER is fabulous.  "We are not doing Get Help."  And then their interactions when Thor's imprisoned by the Grand Master . . .

Suffice it to say that Thor: Ragnarok is definitely my favorite Marvel movie, and the only one so far to actually make me happy. <3 <3

(Just noticed that there are a lot of ellipses in this section.  Huh.) 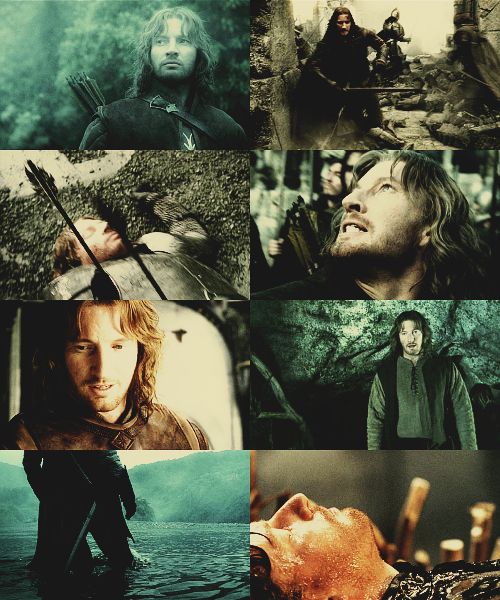 Faramir
from The Lord of the Rings

MY SMOL BEACON OF LIGHT AMID THE GATHERING DARKNESS.  I wuvs him. <3  (Check out this post to learn more about why.)

Killian + Emma
from Once Upon a Time

Individually, these two are two of my favorite characters on the show, and together, they activate full-on fangirl and mother-hen modes simultaneously.  I love their relationship to bits and pieces (and have already gushed about all the reasons why here), and I also get extremely protective whenever someone tries to mess with the two of them.  (Whiiiiiich is pretty often. *sigh*  All the characters on Once, really, are harassed pretty often.)

Like, for instance, when a Certain Character with "golden" connotations does AN UNTHINKABLE THING to the two of them at a certain point in Season Five.  *very pointed looks*  Hoooooo, boy, I was mad.

(Okay, to be fair, it's not like THAT out of the ordinary--considering how often Things Happen in the show--but just all the various circumstances of the situation, combined with the aforementioned Certain Character's attitude concerning the situation, conspired together to create one Boiling Mad Olivia.)


I guess, if I'm being ruthlessly analytical, Killian Jones is more my cinnamon roll than Emma Swan.  Probably solely because, though Emma is scarred and desperately in need of people to love on her and protect her, I also look up to her in a way that I don't tend to 'look up' to my cinnamon rolls.  Does that make sense?  Like, I'm not saying that I don't admire my cinnamon rolls (see: Shasta); I'm not saying I don't want to be like my cinnamon rolls (see: Faramir).  I'm just saying that the primary, initial reaction I have to my c.r.'s is more of an "I will protect you from anything and everything also you're the actual cutest thing in existence goodbye" type of thing than a "Wow, you're so admirable I need to strive to emulate you more!" type of thing.

Anyway.  Whatever the specifics of my definition, Killian Jones is definitely a cinnamon roll to me.  (And so is Emma Swan.  For sure.  But I guess, again, I'm just trying to emphasize the degrees here.)  In fact, a friend of mine (😜) and I recently figured out Killian's exact identity:  He's a dark chocolate cupcake who's low-key five years old.

AND I WUVS HIM.

('Cause, also, once he starts to grow and mature as a character, he's kind of running around frantically like, "I need to save ALL THE PEOPLE to atone for my past sins oh my gosh where's Swan is she okay also where's her boy and where's my mate ahhhhhh #stressed" <3 <3) 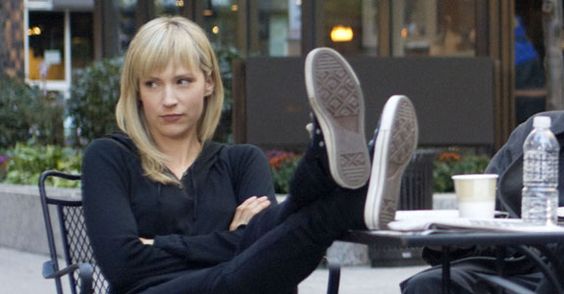 Parker is such a quirky character.  She has her moments of vulnerability and uncertainty (springing from her childhood), but on the whole she's just zany and awkward and content with that.

She's very fond of money.  Not necessarily in an avaricious way; more in an "I really love the actual physical form of currency and jewels and stuff like that" way.

She loves jumping off of buildings in a variety of ways: backflipping, plunging, cabling . . . she'll do any of it, happily.

She has a surprising and endearing affinity for Christmas--and, specifically, snow.

She impulsively tazes people.  And stabs them.  (With serving utensils, but still.)

She has no last name--at least, not one that is ever revealed to Leverage viewers.  (That I remember, that is; I could have forgotten.) 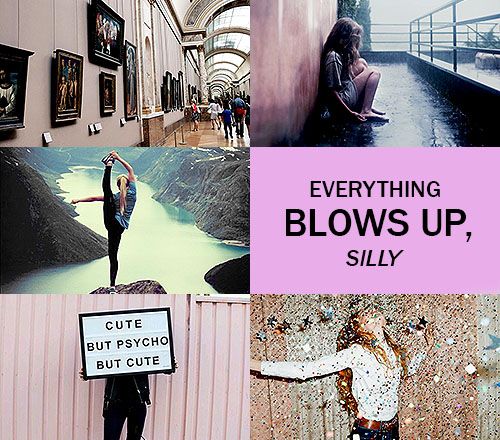 She's fiercely loyal.  Once you have her love and trust, you're going to keep it--and profit by her aggressive protectiveness of you--no matter how odd you are or how checkered your past.

In trying to figure out a good, concise way to describe Parker to the uninitiated, a squirrel suddenly came to mind; and honestly, that's a pretty good illustration.  Parker is like a squirrel.  Her day-to-day mannerisms and movements have a squirrel-like energy, and she has that darting attention span that one can associate with those types of rodents.  She's also just as acrobatic as a squirrel. :-P

I'll reiterate, though, that for all her eccentricities, Parker does have her moments of vulnerability.  She comes from a haphazard past in the foster care system, and she's by no means unscathed.  And whenever some of her scars are grazed by painful reminders, the team around her--the family that life has constructed for her--converges in a telling depiction of the way Parker unknowingly winds people around her strange little finger. 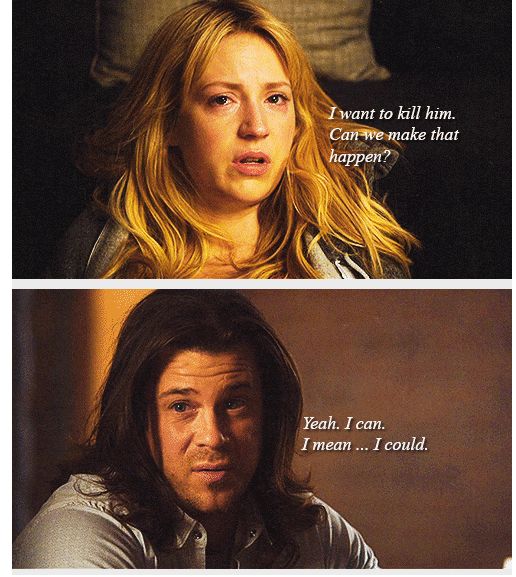 As independent and self-sufficient and big-n-tough as Parker usually acts, she has her own brand of unique sweetness that means that to know Parker is to love her, and to love her is to want to protect her from anything that even hints at hurting her, no matter what. 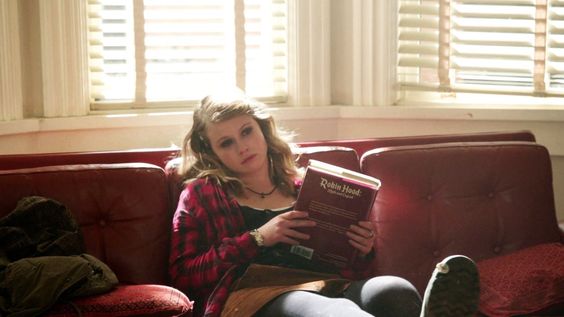 Tilly/Alice
from Once Upon a Time

Tilly makes her entrance into Once in the seventh season, and GUYYYSSSS.  This girl totally stole my heart.  When she first appeared, I was creeped out.  When she continued to appear in the first episodes, I was kind of like, "ehhh not sure about this one".   But then when STUFF STARTED HAPPENING, she quickly became my favorite new-to-the-show character.

She's fantastic, guys.  She has a lot on her mentally and emotionally, and she's struggling with the confusion of blurred and warped memories (#thankscurse) and the pain of being an outcast due to her quirky nature.  As things get weirder and weirder in Hyperion Heights, her relationships with two father/friend-figure policemen deepen, but she's haunted by a vague and nagging knowledge that something isn't right, that there's something they're all missing, and she's flailing to figure out what as she gets dragged deeper into conspiracies and serial killings and stuff like that.  (The seventh season is a wee bit dark.  Not a fan of all that, heh. :-P)

But she's been conditioned to feel rejected and unwanted and slightly insane, so she's tormented.  It's heartbreaking as she comes to the conclusion that, "Nobody sees me."  She feels so alone and so bewildered.

She just breaks through your defenses and makes you love her, in all her playful and unusual glory.

[Quick disclaimer:  I do disagree with certain aspects of her character (she identifies as lesbian), but I don't think that should change how I feel about her.  If we start loving people less because we disagree with them, I don't believe we're following the example that Christ set for us.] Shasta
from The Horse and His Boy

Honestly, if I had to pick one single character who is, to me, the epitome of a cinnamon roll, it'd probably be Shasta.  He's scared and concerned and inexperienced and unfailingly courageous in spite of it all.

He can be all Salty™ and snappy (usually with Aravis lol) but in the end he'll do what needs doing, no matter what.  He's got a strong sense of duty, a fair share of humility hiding beneath the bravado that he sometimes tries to display, and a sweetness and curiosity that make me love him.

And there you have it.  Thoughts?  Comments? ;)
books C. S. Lewis Leverage Lord of the Rings movies Once Upon a Time television