January 06, 2019
I love Lord of the Rings, which basically everybody knows; and I also love parodies, which everyone may not know.  So when I watched the Veggie Tales spoof of LotR (titled Lord of the Beans) for the first time a few years ago, I loved it instantly (and I'm not even a real Veggie Tales fan).

Today I'm sharing some of the reasons I think it's absolutely hilarious, and basically, that's just going to mean quoting some of the best lines + a few of the best parody elements.  Hope you enjoy, and that it makes you want to try this if you've never seen it! :)

Here's a rundown of the Veggie Tales characters and their LotR doppelgangers, to hopefully make things a bit clearer (the names are pretty self-explanatory, but still):

- how Grumpy's first words are, "Oi, could we have parked any farther away?!" because they're trying to capture both Gimli and Boromir

- "Dear flobbits!  Today is my twelfety-twoth birthday!  122 years is too short a time to live among such fine folk.  I'm twice as tall as half of you and half as short as twice of you!"

- Randalf: "And what's this?  An espresso maker?"
Bilboy: "Oh, you really must try it--I tell you, it makes tea taste like bathwater!"

- the shots of Randalf studying the bean intently while Shore-esque music plays, plus this whole bit:  "Why would I want a bean?"
*dramatic pause*
*Randolf starts singing*
"This beeeaaaaannn . . . is not an ordinary beaaaaaan.  This beEEEAaan . . . " / that whole song ("there was aNOther bean . . . AnOTHer bean . . . a fifth bean . . . ") 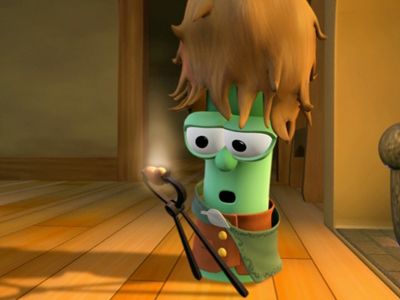 - "Ya gOtTa dReSs FoR tHe WEATHER!"

Plus "Silly Songs with Elves" in general; that whole interpretation of Arwen and Elvish


- SPORKS ("they are his utensils, and they do his bidding")

- Leg-o-Lamb: "The Blue Gate!"
Ear-o-Corn: "Why do they call it 'blue,' you ask?  Perhaps for the sorrow that blankets that land beyond.  Perhaps for the sadness of those who toil on this cursed wall.  PeRhaPs for the RIVER OF TEARS that FLOWS FROM THE--"
Randalf: "Ahem." *indicates door that is literally blue*
Ear-o-Corn: ". . . Or that."

Plus the fact that a little later, this happens:

- how they pay homage to Gimli's line about exercising with this one from Grumpy:  "You know, they--they say you should balance out your aerobic activity with a little weight training.  What say we break and do some squats?!"

- when "the other elf" (he's an amalgam of Sam + Pippin + Merry) saves the gang from the sporks by offering them cookies, and the spork literally says the line:  "We ain't had nothing but maggoty bread for three stinkin' days" and then finishes with, "I'd love a cookie :)".

That may not have made any sense to anyone, but I felt the need to raise some awareness because I really think this is quite entertaining if, like me, you enjoy both LotR and parodies. ;)