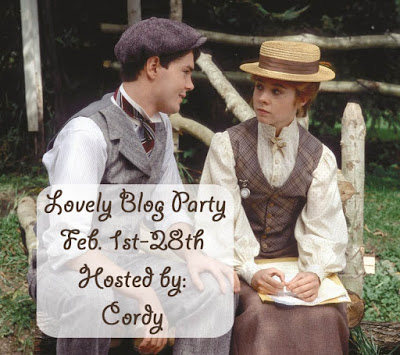 As promised, the third and final installment of my LBP contributions: my top ten book couples!

This list was fun and a bit challenging to compile -- at first because I honestly couldn't think of that many (apparently my favorite books don't necessarily include my favorite romances *shrugs*), and then because once I did start to think of them, they started pouring in!  So this list, like the movies/TV one, has changed around quite a bit, and even now I couldn't positively guarantee its accuracy.  But I feel like that really doesn't matter to anyone but me, so I shall shut up about it forthwith. ;)

"Impetuously, I leaned forward and kissed Neil MacNeill gently on the cheek.  Before he could say anything, I had vaulted off Charlie's back and dashed into the mission house." {Ch. 41}

I like the "slow burn" of this relationship, so it was difficult to pinpoint a single passage (other than the very end).  It's more of a subtle build-up -- the small little hints here and there -- that makes this romance work.

"The man did not even hear her.  His eyes had gone straight to Mercy where she sat by the hearth, and her own eyes stared back, enormous in her white face.  Then with a hoarse, wordless sigh, John Holbrook stumbled across the room, and went down on his knees with his head in Mercy's lap." {Ch. 20}

(YES I'M USING TWO COUPLES AS ONE SSSSHHHH.)  Kit and Nat are just adorable and sassy and beautiful throughout the whole book, and the above quote made me feel all the fluttery feelings the first time I read it, because John and Mercy are such sweethearts. <3

I really need to reread this book.

#8. Jude & Jing-wei
From: The Hunting of the Last Dragon {by Sherryl Jordan}

"Then, an hour before sundown, we spied the dragon -- a small spot in the northwest skies.  Without a word, Jing-wei and I both stood and went into the shrine.  I stood behind her, looking over her head, as we watched from the tiny window.  We did not speak, but we both knew that if the dragon came down first to the beach, as it had before, then these moments might be our last.  I put my arms about her, and she covered my hands with her own, and held tight." {Ch. 18}

I found this couple adorable.  They're very unique, which I liked, and I liked how their relationship developed from friendship to romance, and how one of them (naming no names *aHERM*) took a little while to realize it.  (Let's just say that that one part with the monk whose name I've forgotten was quite satisfying. ;))


I haven't read this one in a while, but I remember loving it. <3  Similar to Neil and Christy, though, it's difficult to pinpoint a single passage -- it's the way the relationship develops throughout the whole book!

#6. Percy & Marguerite
From: The Scarlet Pimpernel {by Emmuska Orczy} 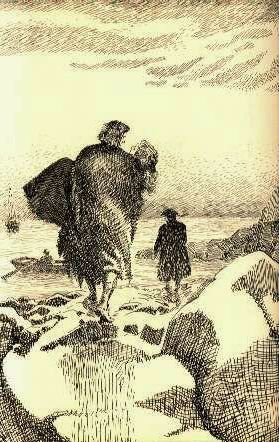 "She looked round her eagerly at the tall cliffs, the lonely hut, the great stretch of rocky beach. Somewhere there, above or below here, behind a boulder or inside a crevice, but still hidden from her longing, feverish eyes, must be the owner of that voice, which once used to irritate her, but now would make her the happiest woman in Europe if only she could locate it.

'Percy! Percy!' she shrieked hysterically, tortured between doubt and hope. 'I am here! Come to me! Where are you? Percy! Percy! . . . '

(Okay, also, for the record, the entirety of Chapter 16 is like really really amazing?!  And I, for one, have no real issue with the way it ends, though I have Heard Complaints. ;-p)  This couple has Very Deep Things going on.  And it's Rather Good, old sport.  I mean, for real.

Also, props for the fact that this couple is already married. *thumbs up*

I kind of died.

While reading this book, I mean.  I was having a serious feels overload from the sheer adorb.

True, Bryce and Juli don't have the best relationship ever -- I mean, they're quite young, so that's a minor concern.  But . . . it's also really stinkin' cute.  It's worth noting -- as I think I read someone else mention -- that were the situations to be reversed and Bryce was Juli's character and Juli was Bryce's, Bryce would be a disturbingly stalker-ish figure.  And, yeah, they both say some silly/inappropriate things (mainly Bryce, I think), but I CAN'T HELP IT I LOVE THEM.  I mean, when Bryce does the thing.  (No, not the first thing, the second thing, at the very end.)  I nearly cried.  IT MADE ME SO HAPPY. 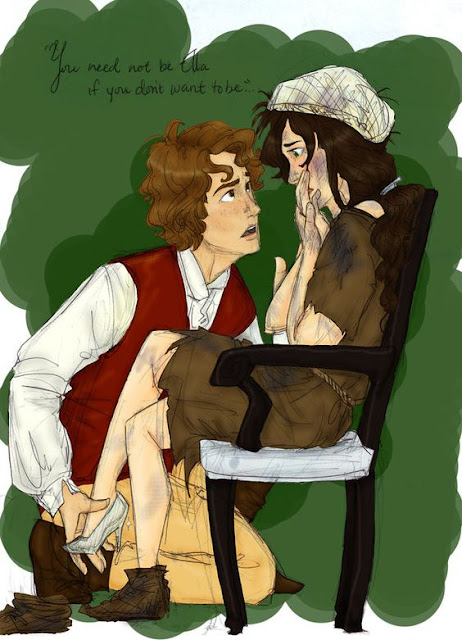 "I thought of a silly explanation for my presence upstairs.

'You've guessed why I shut myself up here,' I said.

'I have no idea.'  He opened a door.  Nothing worth examining.

'What temptation?'  He grinned, anticipating a joke.  He was used to me.  I would have to labor to surprise him.

He shook his head.

'The temptation to slide down the stair rail, of course.'

He laughed, surprised after all.  'And why were you lying down?'

'Pray tell why you were sitting.'

'To pretend I was sliding down the stair rail.'

(Sorry, that was a little long.  But wasn't it cute? ;-p)  Char and Ella are such a well-done reimagining of the Cinderella relationship.  I've liked most of the versions I've read/watched, but these two will probably always have a special place in my heart since the book was (and is) one of my favorites. <33

#3. Coral & Jace
From: the Heart of India trilogy {by Linda Chaikin}

Was his grave expression a pretense?

'I will give serious consideration to your request, say, during the next five waltzes?'" {Ch. 25 of Silk, the first book}


Have I squealed about this trilogy enough?  I rather doubt I have.  Guys, this is a fantastic Christian fiction trilogy that deserves to be better known.  It has its flaws, yes -- parts of it unavoidably fall into the cheesiness cliché -- but it's exemplary in its general avoidance of such pitfalls, in my opinion.  Like, the faith element is actually a thing.  AND GUYS THE ROMANCE IS VERY SQUEE-WORTHY.  It's been awhile since I've read the last book in the trilogy, but I seem to remember the first two being stronger.  Anyway, either way, YOU SHOULD READ IT. 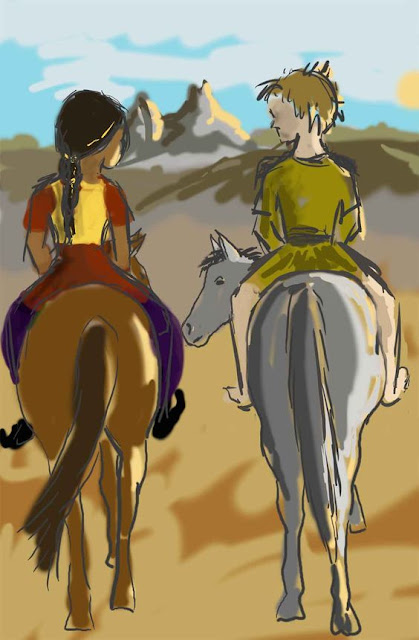 "Shasta slipped his feet out of the stirrups, slid both his legs over on the left side, hesitated for one hideous hundredth of a second, and jumped.  It hurt horribly and nearly winded him; but before he knew how it hurt him he was staggering back to help Aravis.  He had never done anything like this in his life before and hardly knew why he was doing it now. {Ch. 10}

I LOVE THESE TWOOOOOOO. *happy sigh*  Both individually and as a couple.  I think they were one of the first couples that made me experience the joys of "shipping," though I didn't know what it was called back then, wee lamb that I was.

Anyway, I thiiiiink this is my favorite Narnia book.  I can't be entirely sure, because The Magician's Nephew and Prince Caspian are both very far up the list, but I think this is my favorite.  So it's fitting that my favorite couple should be in this book, wouldn't you agree?  These two are preciousness personified, with all their bickering and distrust of each other at first.  And I didn't include the ending quote just in case some of you have been living under a rock and haven't read the books yet (YOU SHOULD BE ASHAMED OF YOURSELF GO FIX IT IMMEDIATELY), but . . . those of you who've read it . . . the ending quote, am I right?! ;) ;) <3 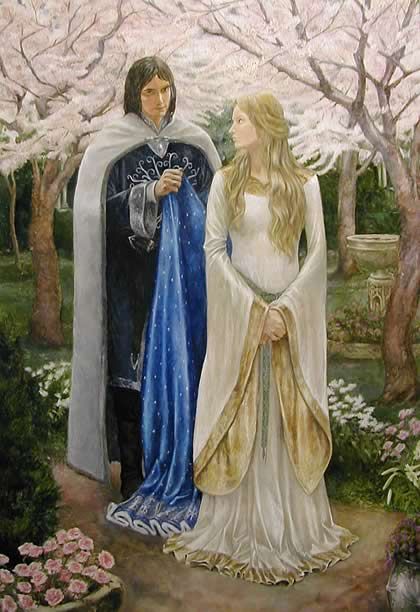 There's really no question.  THIS couple is my favorite. <3

You can read their scene(s) -- which give me ALL THE FEELINGS -- in this post, if you wish.


Thank you SO much for such a truly lovely blog party, Cordy! :)