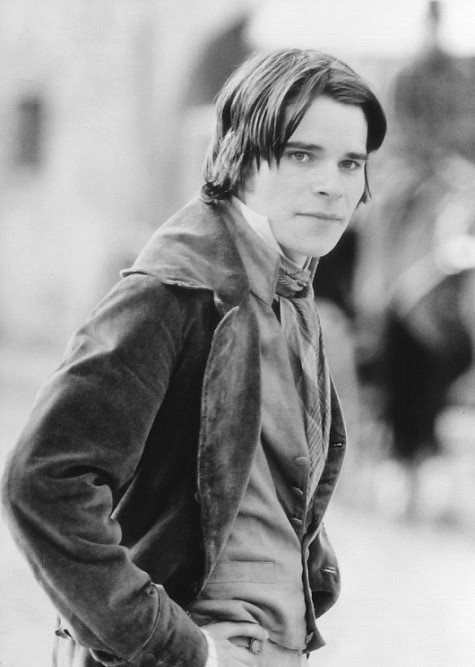 While Les Misérables is not quite my favorite musical (though I do love it), and certainly not my favorite book, one character with whom I was impressed was Marius Pontmercy.  (What mainly impressed me was how Victor Hugo developed his character...which is interesting since my main complaint against the book was the disappointing lack of character development.  Yes, I did just go there.)  I know, I know, Marius is generally regarded as a slightly wimpish guy who is in addition sporting a most unbecoming idiocy about him.

But I am here to tell you a horrifying truth, one that may well alienate from me any staunch Mizzer who reads this:

I liked Marius, at least in the book, vastly more than Enjolras.

I won't go into why I didn't like Enjolras in the book, because my reasons are not sufficiently developed (heh.  I've been using that word a lot.), and I have a feeling that they are too flimsy to support any logical argument.  I would, however, like to state my reasons for liking Marius (and this will be mainly from the book's perspective):

I will be the first to admit that Marius is a flawed, flawed, flawed man.  He is perhaps too easily swayed by a new doctrine, and when Valjean tells him that he is really an escaped convict, he quickly (but naturally) assumes the worst of his father-in-law and does not attempt to stop him from leaving Cosette's life.  And then, of course, there is the uncomfortable fact that he can carry on a blissful romance with a complete stranger through scrolled garden fences while remaining oblivious to the obvious affection of the friend he's actually known for longer than a half hour *ahem*.

Marius is passionate, and, perhaps as a direct result, he is sometimes too influenced by others' passions, yet there is something philosophic in his nature as well.  He tests what he hears and contemplates it, and when he does "go wrong," he does so with the best of intentions:  "There are ways of falling into error while pursuing the truth."

Now then, about Éponine.  Clearly, Marius's actions in regard to her are clueless at best, in fact idiotic in many people's estimation.  He's also regarded as a loser because he doesn't realize that his best friend is in love with him.  And I'd agree that from the movie's perspective, Marius is a bit of really an idiot.  I mean, Éponine is gorgeous, head over heels for him, and a wonderful friend.  But from the perspective of the book (the "original" or "real" Les Mis, if you will), it's a bit different.  (Though here I may begin to give faulty information, as I have only read the book once and it's been a while.  There are many people much better-versed in the book Les Mis, so I freely confess that I might have misread certain parts.)  In the book, Marius has really not known Éponine much, if at all, longer than Cosette.  Certainly, he has spoken to 'Ponine, but their relationship can hardly be described as lifelong, enduring, or close friendship.  I believe I only read about three encounters between the two of them (Marius and 'Ponine) before the barricades.  She admires, even loves him, which is clear to us as the readers, but while he pities her, he has never "thought of her in that way," and can we blame him?  ("Yes, we certainly can!"  "Hush, Little Person.  We are defending Marius here.")  Now, please don't misconstrue what I am about to say.  I am a staunch lover of Éponine, and I feel abundantly sorry for her, and I think she is a wonderful person, and all that, but these facts remain.  Victor Hugo describes her as someone whom poverty and neglect have made unattractive, both in face and in conduct.  She's coarse, uncultured, and slightly ribald.  None of which is her fault, in ANY WAY.  But it is only natural, even if it isn't right or what we would wish, that she wouldn't quite be Marius's first thought for matrimony.

And regardless of my attempt at justifying this, let us not forget that many well-beloved men in period drama are just as oblivious as Marius.  *coughcough* Arthur Clenham *ahem*

And now the last complaint with which I will deal:  Marius's reaction to learning Valjean's true identity.    He doesn't behave well here, but he is understandably repulsed and he is trying to protect Cosette.  And when he learns of his mistake, he's all humility and repentance:

"'Cosette, did you hear what he said?  He asked me to 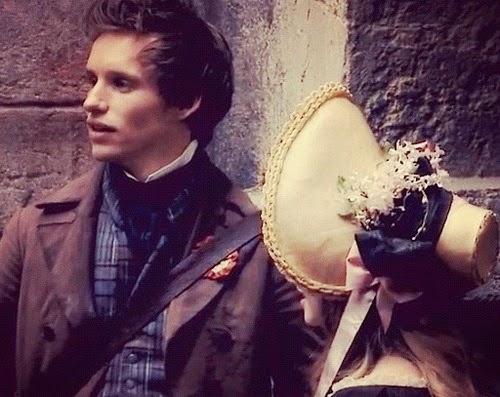 forgive him!  And do you know what he did?  He saved my life and, even more, he gave me you!  And then he sacrificed himself by withdrawing from our lives.  He ran hideous risks for us and now he asks me to forgive him, graceless, pitiless clod that I have been!'"

So no, Marius is definitely not perfect, and yes, he at times behaves idiotically.  But there's an inner nobility to him and a thoughtfulness.  And he is quick to admit his mistakes once he's made aware of them, which shows tremendous strength of character, if you think about it.  Some people (myself included) find it inordinately difficult to acknowledge when we are in the wrong or have hurt people, even if unwittingly.

So there you are, the second installment in my little series Why I Love…  :D
books Les Miserables movies musicals rants Why I Love...