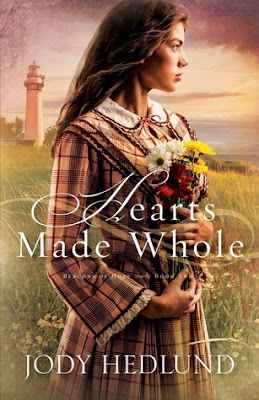 [I received a copy of this book from Bethany House in exchange for my honest review.]

You know how I've mentioned that Christian fiction romance isn't really my genre?

After her father's death, Caroline Taylor has grown confident running the Windmill Point Lighthouse.  But in 1865 Michigan, women aren't supposed to have such roles, so it's only a matter of time before the lighthouse inspector appoints a new keeper--even though Caroline has nowhere else to go and no other job available to her.

Ryan Chambers is a Civil Wars veteran still haunted by the horrors of battle.  He's secured the position of lighthouse keeper mostly for the isolation--the chance to hide from his past is appealing.  He's not expecting the current keeper to be a feisty and beautiful woman who's angry with him for taking her job and for his inability to properly run the light. When his failings endanger others, he and Caroline realize he's in no shape to run the lighthouse, but he's unwilling to let anyone close enough to help.  Caroline feels drawn to this wounded soul, but with both of them relying on that single position, can they look past their loss to a future filled with hope…and possibly love?

Well.  Wow.  I'm not exactly sure how to write this review, because I don't want to be unnecessarily harsh or sarcastic.  It's just…let's say that I wasn't exactly impressed by this book.  (But hey, it's got a gorgeous cover.  Seriously, it's really almost breathtaking in person.  I was happy:D )

Maybe I should start with the bad first, and then go to the good.

Um…okay, I'll be blunt, because that's really the only way I can express my thoughts on this book.  Basically, it was cheesy, overdone, a wee bit unoriginal (but not actually as bad in that way as I initially thought).  Oh, and did I mention this genre's tendency to focus on kissing?  Yeah.

I kid you not, the following selections are actually in that book (and keep in mind that these snippets are coming after approximately a few days of knowing each other):


~ Her fingers closed around his on the reins.  And when she squeezed the pressure went deep and soaked into him.  He drew a deep breath, and it was like getting a fresh gasp of air for the first time in years.  A sense of purpose surged through him, something he thought he'd never feel again.

~ His vulnerability squeezed her heart.

~  The power of his presence radiated between them…

~  She didn't want Ryan to die either.  In fact, the very thought of life without him filled her with an aching hollowness.

My main problem with this book was that it moved waaaaaaaaay too fast.  And I mean way.  I think the fact that the sad parts didn't often elicit any emotion at all from me is partially due to the pacing.

Aaaand…I'll try to be delicate, here, but when dealing with indelicate things, delicacy is sort of…anyway.  Moving on.  One of my biggest issues with the Christian fiction romance genre in general is  that so often, the "relationship" is founded on nothing more than a super overwhelming physical attraction.  And this book, unfortunately, was no exception.  They were kissing after a few days' acquaintance, and throughout the majority of the story, you kept getting this disconcerting feeling that their romance was fueled by nothing more than the fact that they really, really wanted to have sex.  Sorry to be so blunt, but that's basically what it was.  Some of the passages seemed to do nothing more than glorify the temptation to have sex and the valor of resisting said temptation.  Behold:

~ She couldn't resist one more peek at his broad chest outlined beneath his shirt.

~  The rational part of her warned her that she couldn't marry him simply because she wanted to kiss him again, that a marriage needed to be built on much more than physical attraction.

~  The kiss had been full of all the passion and desire that simmered between them.  And now it had boiled over, searing and taunting them about what could never happen again.

~  She couldn't stop herself from grazing a finger across the bare skin of his back just above the bandage.  He tightened, gave a soft groan, and then bolted off the stool, knocking it over in his haste.

And those are some of the more appropriate sections.  I didn't even include a sample of a kiss scene.  Some of the scenes made me slightly uncomfortable and extremely disgusted.  Let's just say that there was a lot of facepalming, book-slapping, and mental gagging that went on during my reading of this book.  Like, every form of facepalm known to man, physical or otherwise (be warned, lots of gifs follow).

Another problem was that the writing was a little repetitive.  Many phrases were used a bit oftener than necessary.  And I know Ryan's Irish and all, but the use of "aye" seemed awkward instead of authentic.  I'm not sure why.  Maybe it was just me.

Here's the ending paragraph (I promise that I'm not spoiling much for you.  CFR is nothing if not predictable):  They smiled at each other, and when their lips finally met, they both knew that the wait had been worth all the pain, that their hearts were made whole now, and they would be able to share a lifetime of pleasure.  Together.  Ewwwwwwww.

But moving on to good stuff.

There were some plot lines that aren't typical of CFR, so that was nice.  And…I guess the name Ryan was cool for the main guy (it's not a name you run into very often in books.  Wonder why…).  There were a few phrases that were cleverly turned and amusing:)  Oh, oh, and I'll admit that the sentimental part of me did like the part when Ryan was leaving the lighthouse toward the end of the book.  That scene was good, even though it too was a bit overdone.  And the fact that he knew that he had to learn to rely on God instead of Caroline.

So, overall, I didn't really like it.  It…rather revolted me at times, to be honest.  I feel like perhaps it'd make a better movie than book, if the script were toned down.  But there were a few good points, so…yeah.