September 26, 2015
I've been meaning to write another "defense" post, and since we're in the midst of Hamlette's awesome Tolkien Week, why not now?:)  (In case you all didn't know, these "Why I Love…" posts are basically the equivalent of those "In Defense Of" or "Defending" kinds of posts--talking about why I love certain undervalued or misjudged characters, and you can read my previous ones by clicking on the link "Why I Love…" in the labels section:D  Just thought I'd mention it.) 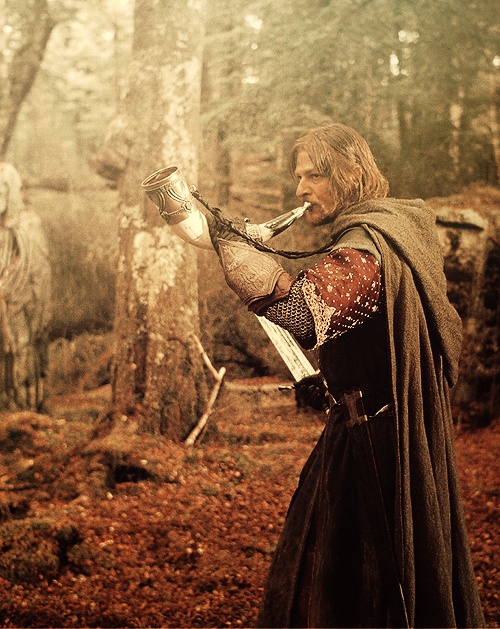 First of all, yes, Boromir is proud.  Boromir is brash.  Boromir is reckless.  But, darlings, that is because Boromir is human.  I'm not excusing all of his behavior by any means, but I do think we all need to step back and look at him objectively as a character and realize how similar to us he really is.  Pride is Boromir's downfall, and it is a weakness with all of us--if not often, at least from time to time.  Hamlette wrote an amazing post on this guy, which you can read here, and which I am now going to quote:

"Some people think Boromir is a villain. But I think he may be the most realistic character in the whole trilogy -- flawed and faulty, but ultimately heroic. I think he's a closer representation of us than any of the other characters. We too trust to our own strength, take pride in our own abilities, and stumble often as a result."

That is so true.  And the beautiful thing about Tolkien's stories is he allows the fallible to be redeemed.  Boromir tries to take the Ring by force, yes, but his motives were at least halfway honorable--he truly did desire to protect his people.  He went about it in the wrong ways, but his end goal was the redemption and rise of Gondor.

Another thing that I had not quite realized is how Boromir sees the potential in those the rest of the world undervalues--namely, his younger brother Faramir (don't even get me started) and the two more foolish, supposedly unimportant hobbits, Merry and Pippin.

Boromir did supersede Faramir's rightful place in the Fellowship (it was originally Faramir's dream that birthed the idea of traveling to Imladris, a detail I'd never realized until I read Craig Bernthal's Tolkien's Sacramental Vision), and that was wrong, since a portion of his reasoning likely included his own arrogant assumption and desire for glory, BUT I have no doubt whatsoever that he also acted out of a clear wish to protect his brother.  Boromir at that time had probably had more experience in warfare and quests than Faramir, and while it is probable that Tolkien considered Boromir's place in the Fellowship an usurpation, "all things work together for good," and all that.  Boromir's own redemption was ultimately achieved through all his mistakes.

"Boromir displays the full range of temptation, fall, entrapment, and recovery within a short narrative."

I love this character for his humanity, his readiness to acknowledge (and mend as best he can) his mistakes, and his attention to those the world considers of no consequence.  While the rest of the Fellowship focuses on Frodo and Sam, Boromir devotes himself heart and soul to "the little ones" (I cannot tell you how much my inner fangirl weeps when Aragorn rushes up to him in the movie and the first words out of Boromir's mouth are "They took the little ones!).  Throughout the majority of the Fellowship's short time united, Boromir takes especial care of Merry and Pippin, though they are often neglected for more pressing matters by others.  And then--and then--but you all know how it all ends.  In a glorious act of sacrifice that I defy anyone not to applaud, Boromir singlehandedly holds back a tidal wave of Uruk-hai while bleeding from multiple arrow wounds.  Gah.  I JUST CANNOT, OKAY?!

While Boromir is not quite my favorite character (he is the brother to my favorite, though), he is one of the best and I love him dearly.

books Lord of the Rings movies rants Tolkien Blog Party Why I Love...