A Look at the Wardrobe of…{a Galactic Senator}

- September 05, 2015
I've been in a major Star Wars mood recently.  I don't know why.  But anyway, I have been, and so lately I've been watching YouTube fan videos (especially of Padmé) and looking at pictures and stuff.

I really love Padmé Amidala.  She saves the new movies, for me; the best character (kind of like Han is the best character in the old ones).  She's just really cool to me:)  So I wanted to take a look at her outfits, because they are AMAHZING.  As a queen and later a senator, she's always attired immaculately (well, almost always.  We'll get to that), and she knows how to carry herself.  (Hey, don't be harshing my geeky like of SW! ;D)

I love it when a character has a lot of different outfits, and luckily, Padmé is one of those characters;)  In fact, she has so many that I'm sure I'll miss quite a few of them.  I'm just going to focus on some particular ones that I find particularly awesome or particularly heinous, yes? 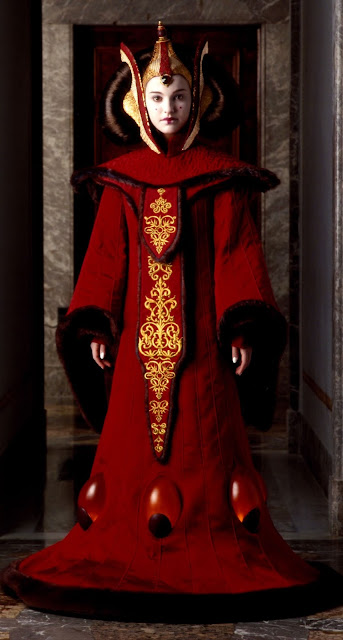 I know this is weird, but I'm actually a little in love with this outfit.  It's wacky and definitely brings in sci-fi elements, but in my opinion something about it, the closer you look, demands respect.  It's a sophisticated kind of weird.  The only thing I think I might have changed is to either remove those bulbous, spotless ladybug things from around the bottom, or make them slightly smaller.  Other than that, though, I admit it.  I love this outfit. 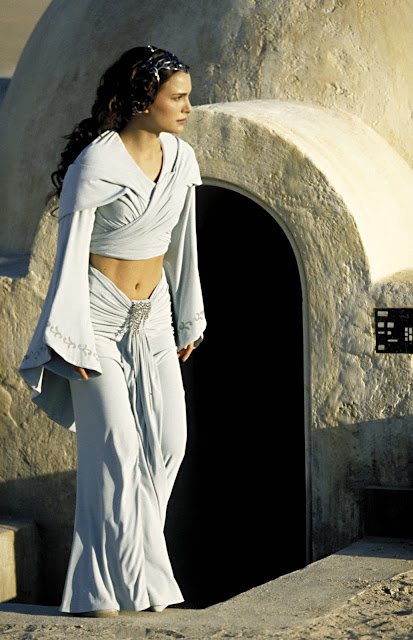 I'll admit, if a crop-top is done tastefully and isn't super high, I think they can be pretty.  This ensemble is sort of a mix of Jasmine-style loungewear, classy styling, and pajamas.  I like it a lot.  It's effortless and elegant, in my opinion. 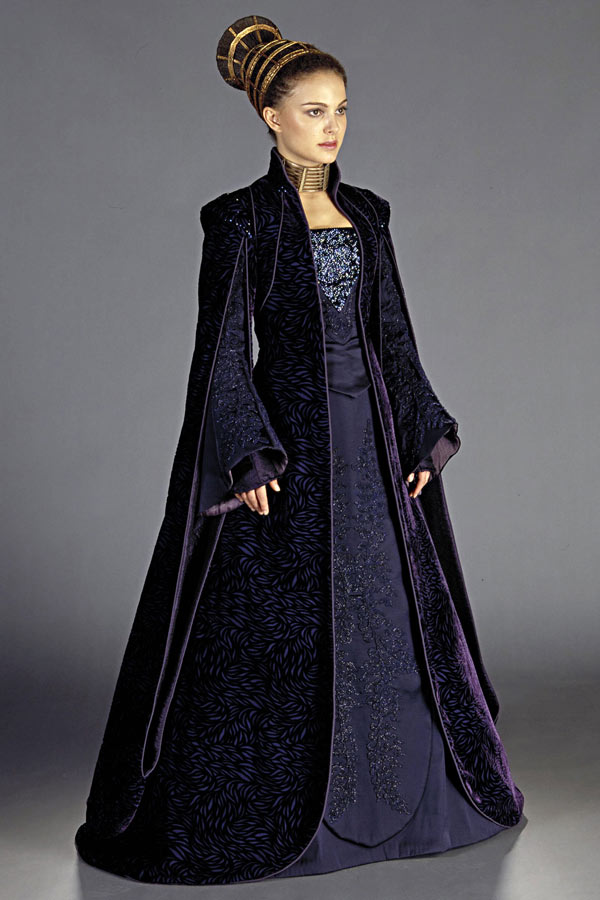 She wears this in that scene where she has that really cool line:  "So this is how liberty dies--with thunderous applause."  (oooooooooohh)  Anyway, this dress has grown on me.  I'm not completely sold on the hairstyle or the brass choker thing, but the detailing in the gown itself is stunning.  Look at it.  A beautiful color on Natalie Portman, and just regal and dignified and graceful. 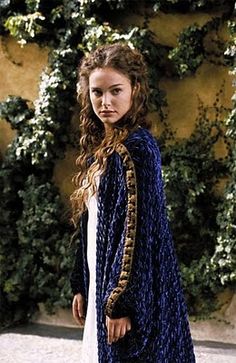 Technically, this is just a robe she throws on over her nightgown, but still.  'T'is beautiful. 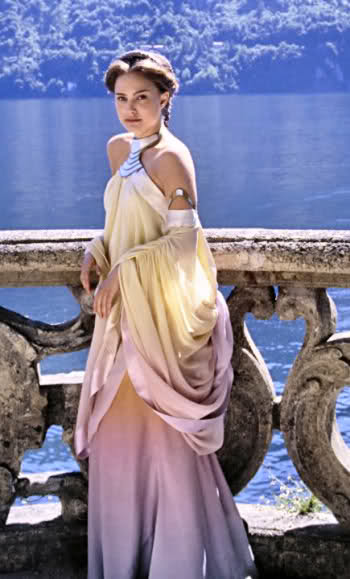 Yes, this outfit could be just a *ahem* leetle higher in the back, but from the front, it's all good.  The ombre effect is great, the styling is great, everything's great. 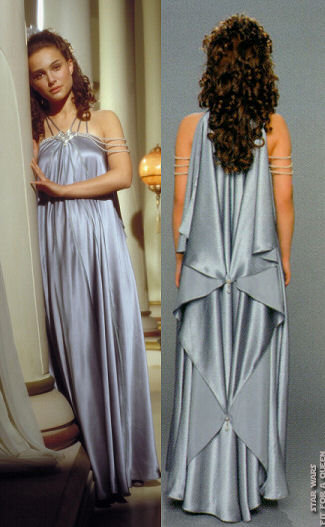 Another gorgeous nightdress.  Look at the pearly epaulets!  Look at her hair!  Look at the silky sheen of the fabric!  (Yeah, I'm a bit of a dork when I find a movie wardrobe that I really like.) 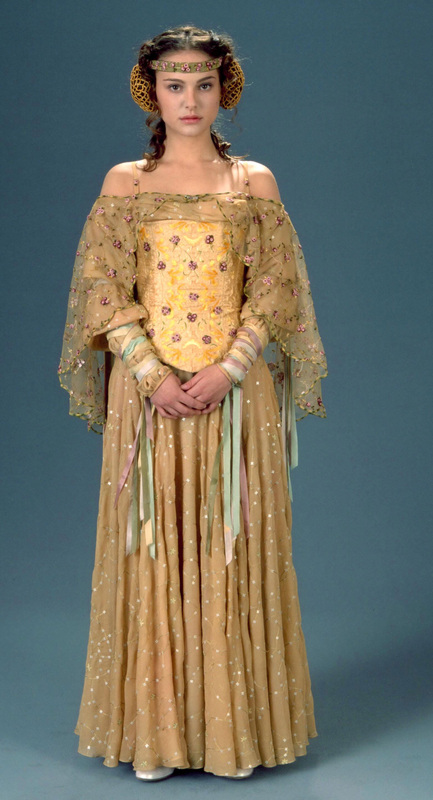 This one doesn't look as pretty in this picture, but in the actual scene, it's very flow-y and golden and spring-like.  I'm not sure about those honeycomb buns on either side of her face, though…;) 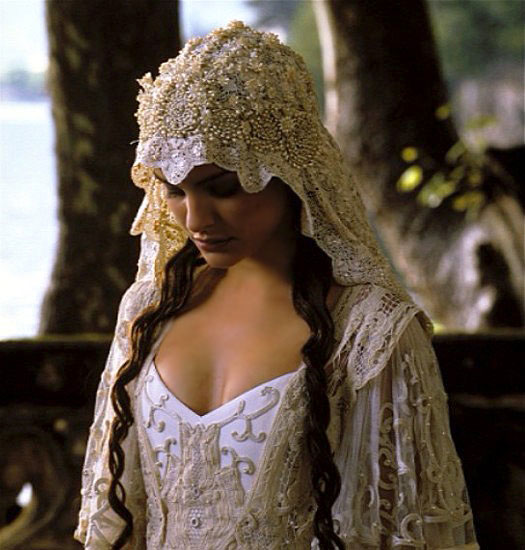 Her wedding look is stunning.  The end.  (Okay, maybe the scalloping on the veil is a leetle much, but I don't really mind it.)

Yeah, it might not be Natalie Portman's best color, but I actually like it the more I look at it.  And it looks like a serviceable travel dress for her, so that's good.

A very subdued, sweet, contemplative sort of dress.  I like it. 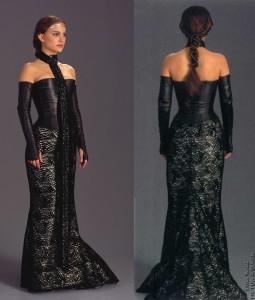 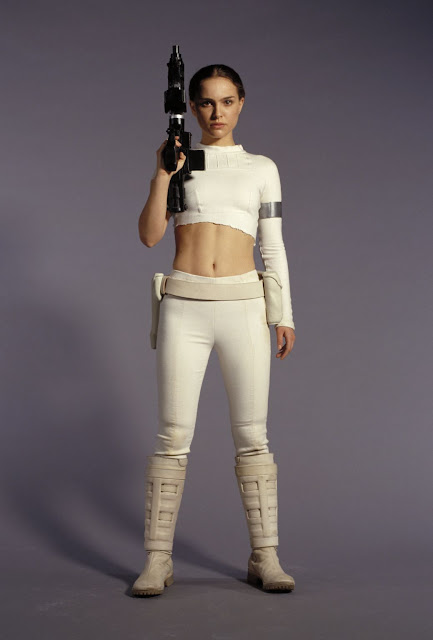 Hehe.  An example of a crop top that didn't really work, at least in my opinion;)  It's not too bad, but it's not too good, either.  (Of course, she was going to be executed in this scene, so I guess it's not really supposed to be glamorous, hehe.) 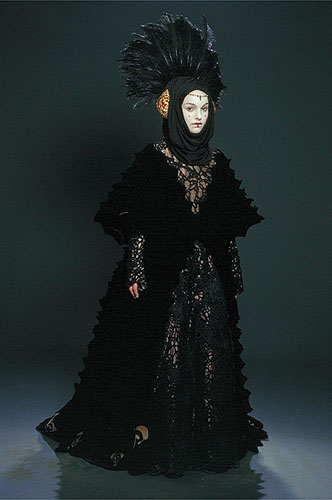 I actually kind of liked this look in the movie the first time I watched it, but looking back at it after a couple of years…there's just too much going on; a whole lot of hardness and black without much of anything to break it up.  It's a bit too harsh of an outfit for me.  Though I suppose it does rather reflect the mood of the scene in which she wears it. 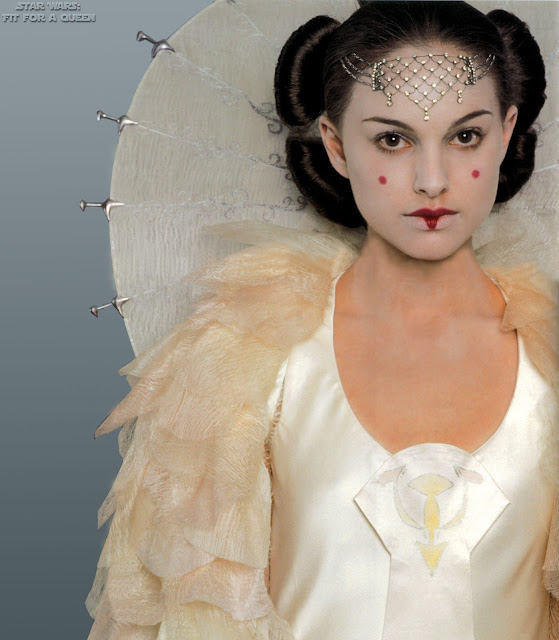 The dress itself isn't atrocious, but it is a little weird.  And the styling didn't really help matters:-/ 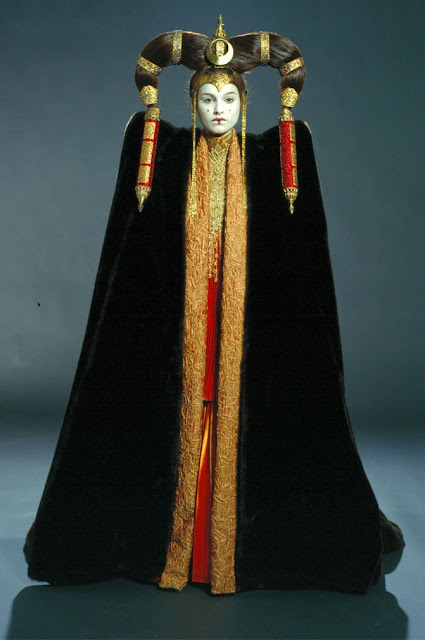 Um, no.  You have antennae, darling.  It doesn't work. 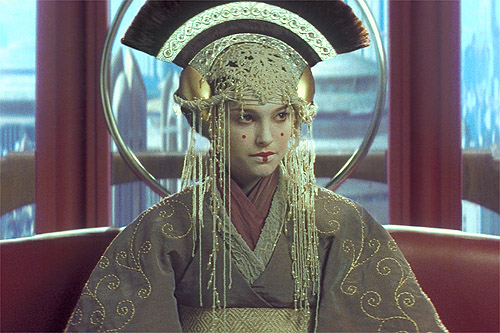 Again…just no.  The oversized kimono thing, with that headdress, combined with the stark white facial powder the senator had to wear, just isn't very flattering or interesting at all. 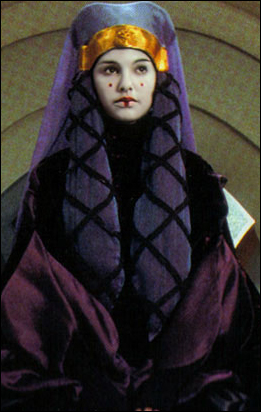 Anywho, I hope you guys enjoyed this post!  Hope my geekiness wasn't too annoying;-P

A Look at the Wardrobe of... movies