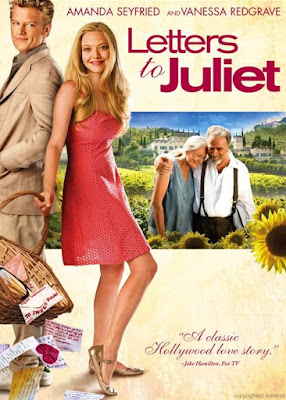 Today I want to review one of the most darling movies I have ever seen, Letters to Juliet.  (And I do intend to start posting more original and diverting things than just continual movie reviews, I promise.)

This movie is just so…*blissful sigh*  It's utterly satisfying, wholly delightful, and nigh on to perfect.

Sophie Hall is a sweet, ambitious woman who dreams of becoming a published writer for The New Yorker, at which she works as a fact-checker.  While in Verona on a "pre-honeymoon" with her fiancé, Victor, Sophie stumbles upon the Secretaries of Juliet, a group of women who collect the notes heartbroken young ladies leave at Juliet's House.  These secretaries then respond to all the letters they can, giving advice and solace as they are able.  Sophie is interested and begins helping them, as her lovable but slightly self-absorbed fiancé is preoccupied with his passion as a chef.  After finding a dusty old letter hidden behind a brick in Juliet's wall, Sophie is determined to respond to its writer, Claire, even though it's half a decade "too late" for all intents and purposes.  Surprisingly, the response letter actually reaches Claire, now sixty-five, and she travels to Verona with her grandson Charlie in order to try and find Lorenzo, the lover she abandoned years before.  Their paths cross, and Sophie joins them on an adventure across the Italian countryside in an attempt to track down and revive a love story that's fifty years old.  And I shan't say any more than that;) 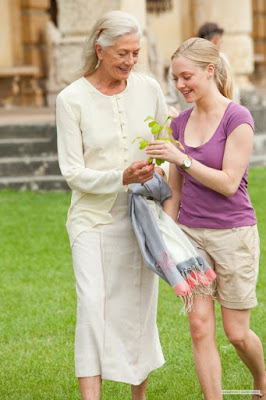 The story is unabashedly predictable, and you don't even care.  You get to revel in the savory Italian flavor of the music, the locations, everything.  You fall absolutely irretrievably in love with all the characters, and you're just swept up into this sheer delight for the senses.  It's awesome.

All the acting is superb (in my opinion), and the script, while effortless and engaging, is meticulously honed to make for wonderful dialogue.  There are a few--a precious few--corny lines, such as "Do you believe in destiny?" and "When we are speaking of love, it's never too late," but they are very scarce and don't detract from the magic of the rest of the movie at all.

Also, for a chick-flick, this movie is commendably clean.  (Dove Family Approved, as a matter of fact.)  It is obvious that Sophie is living with Victor prior to marriage, but that may be the only inappropriate thing, and even that isn't fleshed out at all.  Unless I'm forgetting some minor part--ah, yes, one of the secretaries (an elderly, eccentric lady) does make a rather off-color remark about a couple at one point, but she was speaking within the terms of marriage, and it's all over so quickly that you hardly notice.  There are no Scenes whatsoever, not even the beginnings of one.  There is a bit of profanity, however, including one usage of the s-word, but it never becomes gratuitous.  I think that other than that one instance it's confined to "Oh my God" (not that I'm condoning that, but it could be worse), and there may be a few other very minor expletives.  Also, the kissing does get a leetle much in one scene, but that depends on your perspective.  And it's a very sweet scene notwithstanding.

SO, now that I've got the caveats out of the way…

I love this movie!  I just re-watched it the other night, and I must have forgotten how thoroughly engrossing and enjoyable it is.  It just…everything about it is so delightful.  I know I keep using that word, but that's seriously the best term for it, I think.  It's lighthearted but not cheesy, and it's adorable, and you should watch it.  Now.

The music is lively and amusing, even though (if you're like me) you can't understand it because practically all of the vocal tracks are in Italian.  It does, however, feature Taylor Swift's "Love Story," and I've actually heard a Rumor that the movie was inspired by that song.  I don't know if that's true, but it makes me happy for some reason:D

As I mentioned earlier, the script is excellent.  Every once in a while they'll throw in some true-to-life gem to happily surprise the viewer, like this one below. 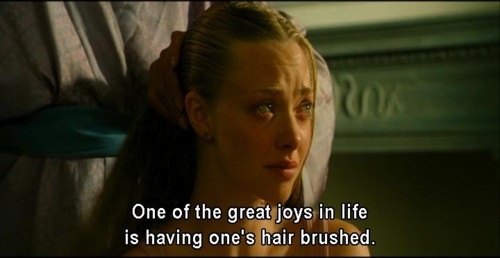 That little moment, though it's only about 25 seconds long, is so sweet.  Hearts.

I like Sophie.  She's spunky without being brash, kind and sweet without being cloying, and she can hold her own at repartee, as Charlie learns to his chagrin;) 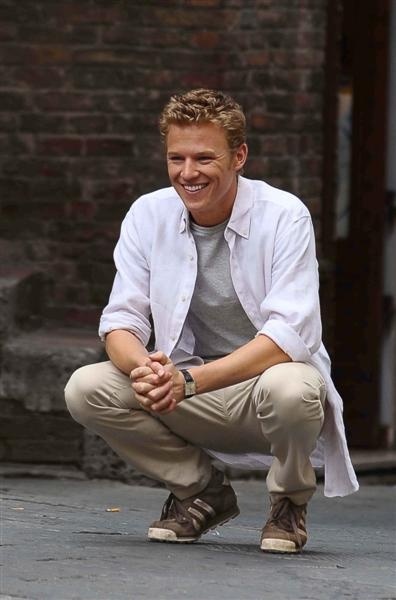 Where does one start with Charlie???;)  At first, he's basically Henry Higgins, except likable.  He's kind of like a giant teddy bear trying to be a grizzly.  (Did I actually just write that?  I'm getting cheesy in my old age, people…)  His facial expressions are priceless, and just his whole blustering objection to the entire venture ("Charlie doesn't approve, which makes this all the more fun") is adorable.  He is just a rather adorable character, really.  I love how he calls his grandmother 'Nana' and 'Gran' interchangeably.  And when he's uncomfortable, and starting to like Sophie, his awkwardness is hilarious:  "Oh, no, no need.  She's tough as old nails, that one.  Churchill in a dress." ~ "Is this one of those situations where you say the opposite of what you really mean?"  All of his lines are awesome, really:  "She's coming?  Oh, she's coming!  Oh, splendid, splendid!" ~ "I said 'could have been.'  Let's not get carried away, I have a reputation to uphold." ~ "It's over, done!  We found Nemo!  The curtains have closed!  Exeunt omnes!"

And OH MAH HEAVENS ABOVE, his and Sophie's relationship!

Their goodnatured hatred of each other in the beginning, and then their slow respect for each other, and then--and then--gah.  It makes me happy. 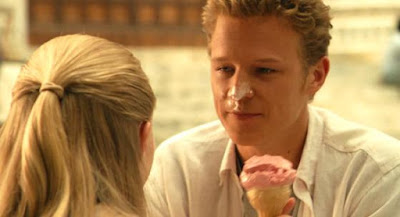 The ice cream scene, though… :D

Wanna watch this movie yet?  Yeah.  I thought so.

I am now going to start talking about the latter portions of the movie, so…spoilers.  You know.  If you don't want to find out what happens, read no further!

I feel I should mention Victor.  I really do like him, too.  (I think Charlie is better suited for Sophie, of course, but still.)  Victor is…*sigh*  Victor is lovable, too.  ("Win-win!")  His devotion to his culinary work is adorable, even though it does cause him to neglect Sophie.  The scene when Sophie has to break up with him does make me sad.  Because I think he did genuinely love her, just not…enough, if you catch my meaning.

And Claire!  Claire is, as Sophie put it, awesome.  She's candid, loving, welcoming, elegant, approachable, and wants the best for the people in her life. 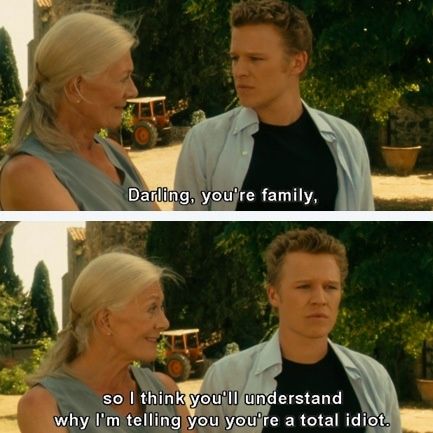 I love how accepting she is of life as it is.  She doesn't rant and rail when things don't go as originally planned, and she doesn't even give Charlie a harsh talking-to (which it could be argued he deserved) at that one part where he says Hurtful Things to Sophie.  She just gently points out the truth of the matter to him, and loves them both throughout the movie.

And when she finds her Lorenzo… 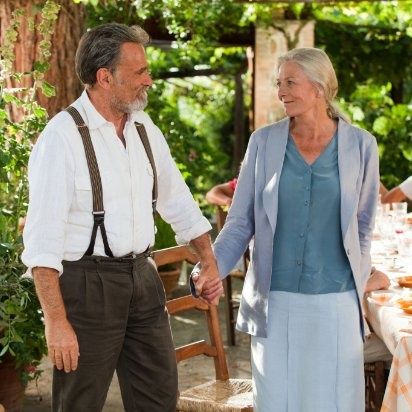 These two are actually married in real life.  I KNOW RIGHT?!

…we're so happy for her:D  Though I suppose the whole riding-up-on-a-horse thing could be picked apart as corny.  But it was INTENTIONAL, people.

And the last scene.  Sophie arrives at the wedding intending to tell Charlie she loves him, but then--horror of horrors!--Patricia is there.  He introduces her to Patricia…and his ex-girlfriend's name was Patricia.  So what is Sophie supposed to do now?  She can't tell him, but she can't stay either, so after the toasts, she not-so-subtly leaves the reception, and he not-so-subtly runs after her. 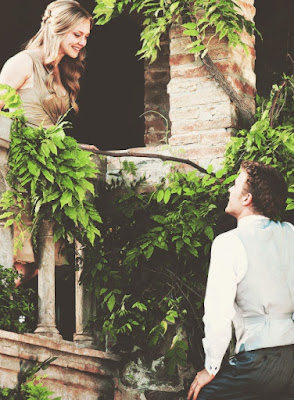 I LOVE THIS PART.  The acting is great, the feels are there, and the dialogue is awesome.

"Patricia's my cousin!  She's my cousin!"
"How is that legal?"
~  ~  ~
"I live in London:  a gorgeous, vibrant, historic city that I happen to love living in.  You live in New York, which is highly overrated."
"Pardon me?"
"Zah-ee-yah!"  (THAT LITTLE VERBAL PROTESTATION, THOUGH.) 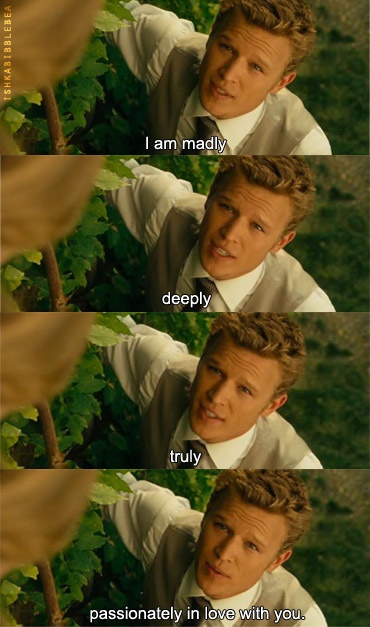 Whereat we can all sit back and sigh with satisfaction and happy-warm-fuzzies and think what a splendid movie we just watched.  (Except that it gets even better, because he promptly falls off the vine.)

In closing, because I really need to get off the computer, GO WATCH THIS MOVIE.  You won't be sorry you did.