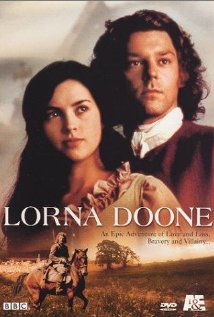 The 2000 movie version of Lorna Doone is one of those movies that my parents and my older siblings used to watch and quote and laugh about, back when I was still too young to see it, and when at last I did get to watch it a number of years ago, I wasn't quite sure what I thought of it.  (I think I was about eleven or twelve then, though, and I was easily creeped out, so that might have had something to do with it.)  I enjoyed it, but it also seriously disturbed me.

NOW, I quite like it--probably love it.  I don't watch it very often, because it is a haunting, not-easily-forgotten story, but whenever I do, I enjoy it.

However, as Miss Dashwood put it in her review (which is impossibly clever and scarily accurate, plus just an all-around great review of LD),  "I really, really liked this movie. However, I can never resist poking fun when there's something around to poke fun at, so I may make a few jokes at the characters' expense. This does not in any way reflect upon my opinion of them--the hero in particular. He's a great guy but he's also easy to laugh at."  And that's basically what I'll probably do, okie-day? :D 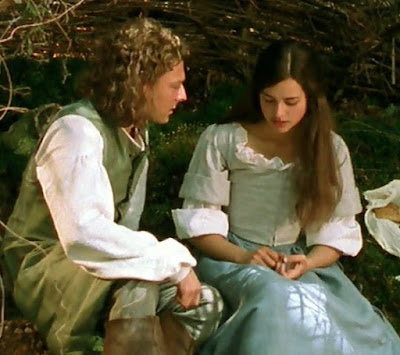 The story, for those of you who haven't watched/read about it, is basically Romeo and Juliet, at least at first, set in Exmoor, England, involving land and social disputes--except for the fact that this feud is understandable, since, ya know, the Doones (one Doone in particular *ahem*) are murderous sociopaths who have made it their business to raid, pillage, plunder, and otherwise pilfer their weasley black guts out.  So, yes, the epic old tale of star-crossed lovers and dreadful fate and whatnot.

While the fact that Lorna and John's relationship is established in pretty much the course of one 24-hour period annoys the heck out of me if I think about it for too long, somehow they managed to do it well in this movie.  The two are really very sweet, and if the beginning of their relationship is idyllic and cliched and unreasonable, do they ever have a lot to go through as it progresses.  The makers didn't skimp on emotional tension (can I get an amen to that??), even as regards the starry-eyed lovers.  They have their fights and their disagreements, which I appreciate.  T'is a shame when movies don't portray the "real life" side of love, isn't it?  On to characters! 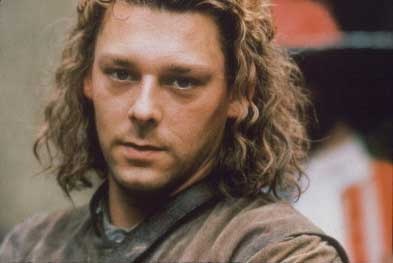 John Ridd is…an interesting fellow *struggles valiantly not to laugh*.  He's a terrific guy and I love him dearly but he can't sing is also just the leetlest bit silly.  You guys who've watched the movie, you know what I mean.  He's brave, open-minded, and for the most part, constant, but…he can be a bit goofy at times, too.  And the hair, of course, doesn't help too much.  (But then, knowing as we all do Richard Coyle's propensity for flamboyant hairstyles, we really can't be too surprised, can we?)  Nonetheless, he's quite lovable, and his acting is great.  "You break my heart and then accuse me of cruelty!"  (I likes his accent muchly.) 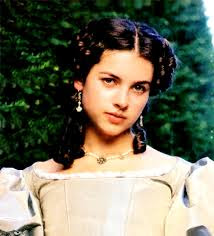 I like Lorna a lot, and I'm not quite sure why.  Maybe it's that she seems just a little bit more intelligent than John in terms of relationships and not wanting to rush into them *aHEM*.  Maybe it's that she's generally a rather quiet lass, and I'm partial to quieter characters.  (Is it just me, or is there a bit of a scarcity of introverted but graceful heroines?)  Maybe it's the fact that she doesn't begrudge her captors, not even Carver.  Anyway, I like her.  Plus, ya know, she's gorgeous, as are her outfits and hairstyles.

BA-BAM.  Here's Carver.  Pretty much as he looks:  a creepy, booted, mohawked, pedophiliac, disagreeable stalker whom we all like a little, much to our chagrin.  I mentioned him here, and that's about all I got on him at the moment.

The supporting cast boasts several period drama favorites, such as Barbara Flynn and Joanne Froggatt.  They're all variously entertaining, especially Tom ("You should never have left her."  "All things considered, I agree.") and what's-his-face-who's-played-by-James-McAvoy. 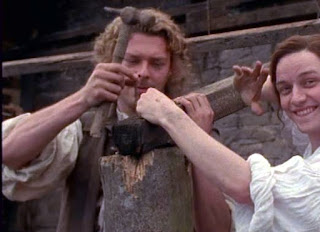 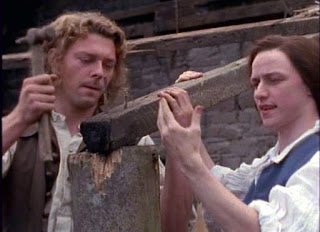 Hehehe;)  While I'm not the biggest fan of Joanne Froggatt *ducks rotting vegetables*, I do like her in the second half of this movie (not the first half, 'cause she's just annoying in the first half), and her relationship with aforementioned-and-pictured James McAvoy-dude is vastly amusing.

This scene, though, when the army people are preparing to leave: 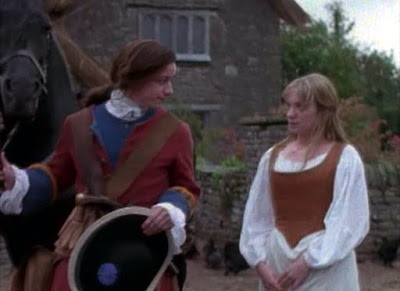 :D  Aren't they the cutest, though?  When they come riding back and she comes running out to meet him and then at the end when they're walking through the wheat field (his hair in that last scene, though…)! 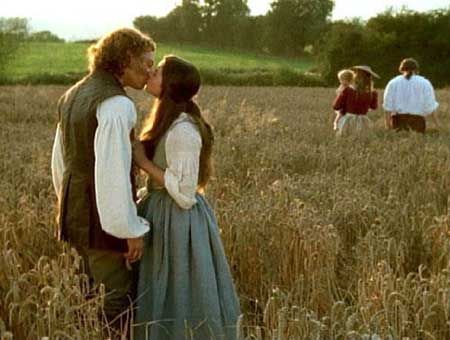 All in all, though it's not exactly a feel-good movie, it's powerful and sweet and difficult and one of the few movies that your whole family might actually enjoy watching together.  And DAT ENDING THOUGH.  Wow.  Sheesh.  Okay, stopping right there because, ya know, spoilers;)