October 03, 2015
I watched the classic Western The Magnificent Seven the other day, and…

It truly was magnificent, and I think what I most appreciate about it is that it wasn't melodramatic (as older movies can tend to be), and it wasn't unnecessarily tragic.  Realistic, yes, sad, yes, but with a gentle ending that exhilarates you in a quiet, happy way. 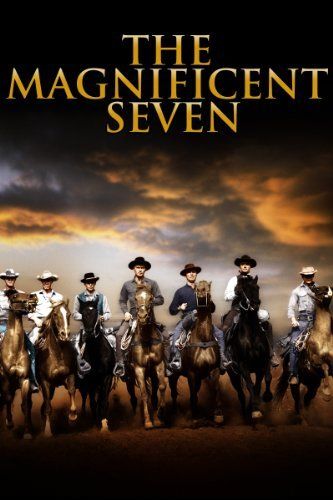 Quick overview of the story:  three men from a poor Mexican village enlist hired gun Chris Adams to help them redeem their town from the oppression of Calvera, a hypocritical bandit who glibly robs them of all their resources and kills any who oppose him.  Chris in turn puts out an "advertisement" for backup and, in the end, seven hardened cowboys arrive at the village as a reinforcement for the townspeople.  Individually and as a group they begin to prepare the village for Calvera's next raid, and in the process become attached to those they are protecting. 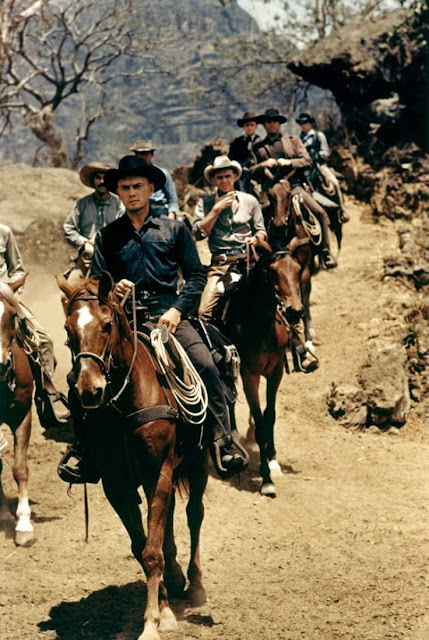 The movie fulfills all the criteria of a great '60s Western--meandering (in a good way) pace, epic scale, horses, dust,  scarcity of romance (but there is one romance because there's got to be at least one--and I'm glad of it; I do like a romance in a movie, I admit), and a glorious musical score.

As to characters…just yes.  Of course, with a cast like that, you really have to try very hard if you wanna go wrong, but still.  I LOVES THE CHARACTERS. 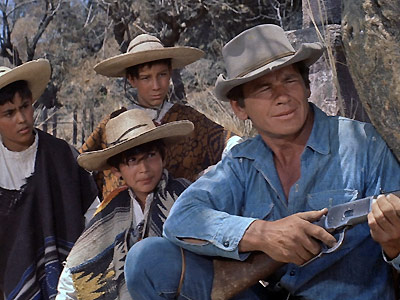 Bernardo is my favorite of the Mag7 (Hamlette alerted me to that phrase and I have adopted it heart and soul).  His relationship with those three boys…be still, my heart.  *SPOILERS*  Honestly, though, when they come running up to him as he's dying and he takes the time to point out their fathers' bravery to them, and then THE LINE, "What's my name?" and JUST GAH (the flowers). *END OF SPOILERS*

But then there's also Chris…

…oh, all right, the only ones of the seven to whom I didn't really get attached were Lee and Harry.  Ehh.  Though I did feel sorry for Lee, and Harry's last scene…I loved Chris in that one especially *sniffle*

The film boasts some killer dialogue, too.

"Their families told them we would rape them."
"Well, we might.  But in my opinion, you might've given us the benefit of the doubt!"

"He's prejudiced too, huh?"
"Well, when it comes to getting his head blown off, he's downright bigoted."

"We're ashamed to live here. Our fathers are cowards."
"Don't you ever say that again about your fathers, because they are not cowards! You think I am brave because I carry a gun; well, your fathers are much braver because they carry responsibility, for you, your brothers, your sisters, and your mothers. And this responsibility is like a big rock that weighs a ton. It bends and it twists them until finally it buries them under the ground. And there's nobody says they have to do this. They do it because they love you, and because they want to. I have never had this kind of courage. Running a farm, working like a mule every day with no guarantee anything will ever come of it. This is bravery. That's why I never even started anything like that... that's why I never will."

"If you get killed, we take the rifle and avenge you. "
"And we see to it there's always fresh flowers on your grave. "
"That's a mighty big comfort."
"I told you he'll appreciate that!"
"Well, now, don't you kids be too disappointed if your plans don't work out."
"We won't. If you stay alive, we'll be just as happy."
"Maybe even happier."
"Maybe."

"I just didn't want you to think you were the only sucker in town."

As I mentioned earlier, I like that this movie wasn't cheesy, wasn't melodramatic, wasn't tragic for the sake of being tragic, and wasn't "a downer."  I'm not saying some of the characters don't die, but not everyone dies (was that a spoiler? I sowwy).

I really liked this movie.  It was engrossing, humorous, emotional, and happy at the same time.  (I may or may not have rewound the ending about five times.)  *SPOILERS*  While the deaths of certain characters were extremely sad, at the same time something about the ending felt very right.  The Elder (I forget his name) giving that beautiful blessing ("You are like the wind, blowing over the land, and passing on.  Vaya con Dios."), Chico at last releasing his fantasies of glory and his disdain of honest farm work and returning to Petra, and Chris and Vin riding off together in companionable silence.  It was just a very satisfactory ending. *END OF SPOILERS*