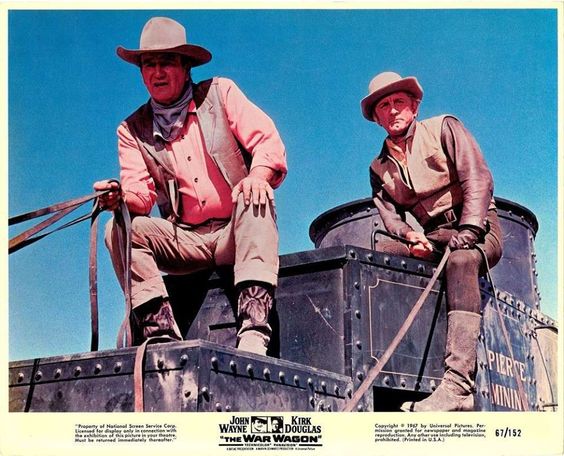 Once upon a time, a lovely blogger called DKoren reviewed a movie.  (Well.  That is to say.  She's done that lots, but this was a special instance I'm talking about here.)  She sparked my interest right off the bat by observing that it starred John Wayne (in case you didn't know, I have A Rather High Regard for the Duke).  She ensured that I would specifically plan on watching it when she mentioned that Howard Keel makes an appearance as…an Indian?  What?  This I had to see.  (In case you didn't know this, either, I have An Equally High Regard for Mr. Keel.  His voice, what.  It demands respect, dontcha know.)

Time passed, and lo, the film showed up in my library's DVD collection.  You will be happy to know that I secured said DVD, carried it home, and watched it before any great amount of time had elapsed ;)  And I liked it just as much as I expected to--more, probably.  (Except for Lomax, that is.  We'll get to him.)

This movie is all kinds of fun, people.  I really, really like it.  From the very beginning, with the typical panoramic shots, I was on board.  I love the opening sequence, actually:  you know how everyone talks about the beginnings of iconic Westerns and how they have the same general framework?  Well, this is one that actually gave me tingles of delight--the War Wagon cavalcade rolling over the terrain with the rollicking title song playing, and the fun opening credits…I knew this was gonna be good ;)  (Speaking of the title song, IT'S SO MUCH FUN.  Although, I have to say, what on earth is the point of having Howard Keel in your Western movie if you aren't going to have him sing the song?  Still, the dude who sang it had a pleasantly old-timey voice, so no real complaints.)

Hark!  I've forgotten myself and a summary.  Basically, there's this thing called the War Wagon.  It's like the ultimate stagecoach, if you will--complete with safe-like security elements and a rotating machine gun, of all things--aw, to heck with it, here's a summary hand-stolen from Google:  Rancher Taw Jackson (John Wayne) is out for revenge. He was shot by a gunslinger, Lomax (Kirk Douglas), on the orders of mining tycoon Frank Pierce (Bruce Cabot) and framed for a crime he did not commit. Now out of prison, he teams up with former enemy Lomax for an elaborate heist targeted at one of Pierce's gold shipments. Robbing the heavily fortified stagecoach, known as a "war wagon," won't be easy. But the payoff -- $500,000 in gold -- will be sweet payback indeed.  Sure.  That'll do ;) 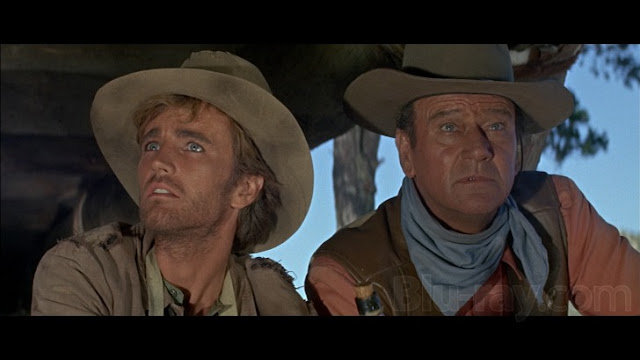 So, yes, in order to pay back Pierce and try to reclaim his ranch, Taw recruits a motley crew of rivals and acquaintances to hijack the WW on its next journey.  And I like every single one of them, except for that Fletcher dude.  Eww with a capital E and No with a capital N.  I don't like to say it, but the end sort of serves him right.  (Plus it frees things up for Kate and Billy, and KATE AND BILLY THOUGH <3)

I like Taw pretty well--it's not like he has "a moral center" the depth of the Mariana Trench, but he's not a villain, either.  He's great fun to watch.  His frenemy Lomax is…an interesting sort, shall we say.  I liked him better the second time I watched it--after all, he is rather funny and he does have some exemplary dimples--but I Strongly Disapprove of his whole deal with saloon girls.  Seriously.  Be a (real) man already, would you?  I also didn't like how his fling with Nora was treated flippantly, as though it wasn't a problem, which, y'know, I think it was.  Nonetheless, Lomax is undoubtedly amusing and the ripostes he and Taw exchange are priceless:  "I can't afford to let you get killed unless I do it!" ~ "You'd leave me here without a horse?  Penniless?"

My favorite is probably Billy Hyatt--he's about eighteen, prone to imbibing, gifted in the fine arts of nitroglycerin, and basically adorable :)  And when he meets Kate, who was "bartered" by her impoverished parents to Fletcher...LET THE CUTENESS BEGIN.  In case I haven't stated it enough (I have, I know), I'll state it again:  I love Billy and Kate.  (This may be partially because they are the only real romance in the movie, but only partially.)

Though the story could have been told in less time than it was, the film on the whole moves at a pleasant pace, finding a happy medium between ambling and brisk.  I found myself keenly enjoying the various preparations, stealthy attacks, chases, quips, and relationships involved in this story which could easily have bored me.  I mean, it's about a bunch of guys setting up booby-traps to take down a stagecoach with almost comically before-its-time defense mechanisms, to get a bunch of gold, to pay back somebody who wronged somebody else.  Not exactly the stuff of legend…except that it totally is, too.

The resolution of the conflict is immensely satisfactory and humorous--all in all, I sorta love this show, silly though it is.  It's just a raise-some-dust-and-revenge Western, and it's really fun.  The acting is great, the leads are witty and rivalrous, KATE AND BILLY ARE SO SWEET, THEY BRING JOY TO MY SOUL there's just enough romance to keep it from being too male-centric and random, there's a killer opening sequence, there's Howard Keel as an Indian, there's a satisfying, exciting but not gory chase-and-attack scene at the end, and a humorous, whimsical little conclusion.  So, yeah.  Go watch it :)