- August 02, 2016
I have good news!  Hamlette (a masterful authority on the Western genre) and I are both hosting giveaways for this grand and glorious week of fun :)

Hamlette is giving away not one, not two, but FIVE Western television prizes.  Get thee over there posthaste--it's a veritable smorgasbord!  Her giveaway post is HERE.

And now, my turn:  I will be giving away 4 Western movie picture prints 8x10 inches each, 4 "postcards" (they seem a bit big to be postcards, to me, but they have the regular postcard formatting, so…I guess I'll take them at their word) featuring various pictures of John Wayne, and 1 Western novel.  (I apologize in advance for the poor picture quality.) 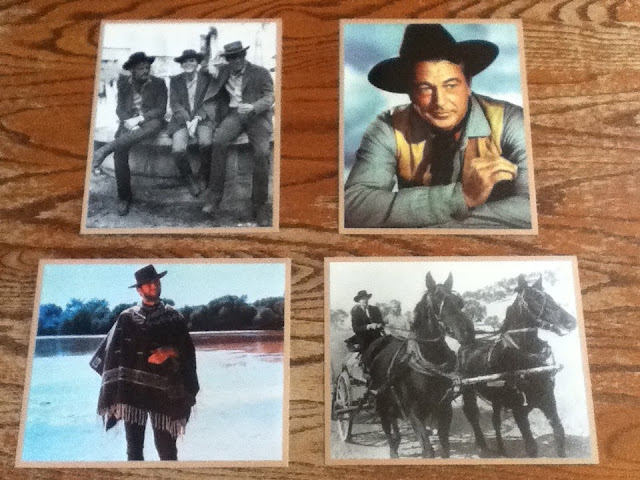 Top row:  Robert Redford, Katharine Ross, and Paul Newman hanging out on the set of Butch Cassidy and the Sundance Kid; Gary Cooper in Man of the West.

Bottom row:  Clint Eastwood in The Good, the Bad, and the Ugly; Gary Cooper and Grace Kelly in High Noon. 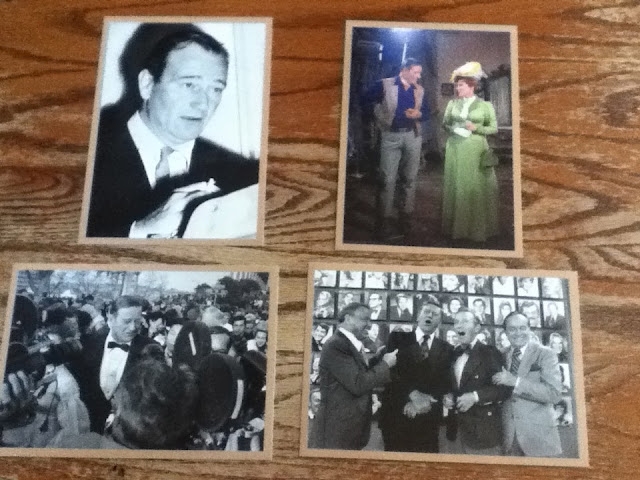 Top row:  John Wayne testifies in court during in alimony battle with soon-to-be-ex-wife; John Wayne and Maureen O'Hara on the set of McClintock!. 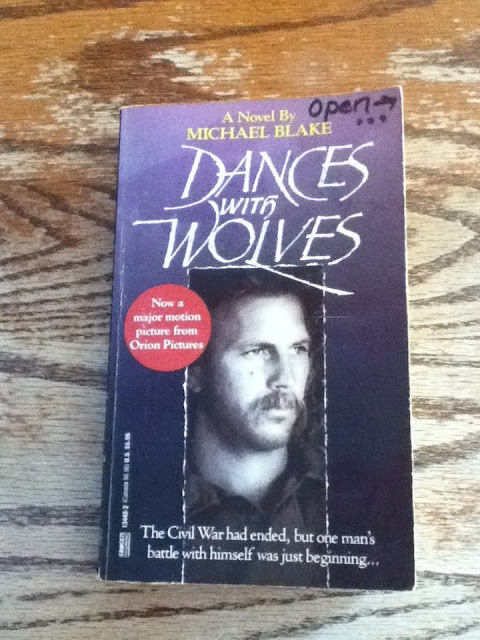 Dances with Wolves by Michael Blake.  I bought this at a thrift store a while back, so it has a bit of wear and tear, though I haven't read the whole thing.  As you can see in the picture, there is some "scribbling" on the upper righthand corner, as well as an inscription on the inside front cover (somebody giving the book to somebody else as a gift).  Other than that, I don't think there's too much evidence of it having been used, but I could be wrong.  This is the novel upon which the Kevin Costner movie was based (in case his face on the cover and the red circle announcing it didn't fill you in).

To enter:  Please leave a comment telling me your first, second, and third preferences if you win (feel free to mix and match from the three separate "bundles").  I think I'll pick anywhere from two to five winners depending on how many entries I get, but we'll have to see how it all plays out.  My giveaway will be open August 2 - 8.

Have fun, and, as Print would say:  "Never use money to measure wealth, son." ;)  (Also, don't forget to visit Hamlette's giveaway HERE.)