4 Things People Say When They Find Out I'm a Vegetarian (and tag answers!)

- August 29, 2015
Hi, guys!  My LRtC review is in the works, but I have a feeling it'll be a while before it's up, and even when it is, I'm not sure it'll be adequate, hehe;)  So in the meantime, I'm whipping up a quick post talking about how people react when they find out I'm a vegetarian.  Now, please, I don't want to offend anyone in this post, but I Must Speak My Mind now and then, and so this one might be a bit more sarcastic than usual.

"Why?"
This is the #1 thing that it's almost guaranteed people will say to me when they find out I don't eat meat.

Sometimes, the people who ask this have completely innocent motives and are just curious about why I'm voluntarily an herbivore, and they ask it in a very polite way.  But alarmingly often, people ask it in a tone that drips condescension and the clear intent to persuade me of the nonsensicality of my choice.  Sometimes this comes from good intentions, but trust me…it isn't exactly a good idea to ask a vegetarian why they're a vegetarian if you make it unequivocally obvious that you think it's a stupid thing to be.  Dear well-meaning people:  save yourself the time and don't try to convince me that I shouldn't be a vegetarian.  It'll only waste your breath and get under my skin.  I'm by no means saying that I'll always be a vegetarian, but for now, I am, and if one day I decide to change my mind, I can do it without your input and reasoning.  (I really do mean this in the kindest of ways.)

Oh, and just in case y'all are curious, I'll tell you.  I personally am a vegetarian because I personally don't want to eat animals, though I don't consider it morally wrong to eat meat (except certain seafoods, the ones that are "prepared" via being boiled alive.  Call me crazy, but I do have a slight moral aversion to burning anything alive).  You gotta understand, this is a girl who could never even bring herself to directly kill an insect (at least, not once I reached a certain age).  I just couldn't (and frankly still can't) do it.  But just because I myself have those feelings does not mean that I look down on those who squash a spider when they see it (there really is nothing wrong with that).  It helps that I also never really liked meat that much.  I do miss tuna sandwiches at times, but that's about all I miss.  Trust me, I doubt that I would be a vegetarian if I liked meat more than I do.

"Oh, wow.  I could never be a vegetarian; I love meat."
Um…okay?  More power to you, then.  I don't really care love it.  Hence the vegetarianism.

"But isn't it Biblically wrong to be a vegetarian?"/"God gave us the animals to eat." 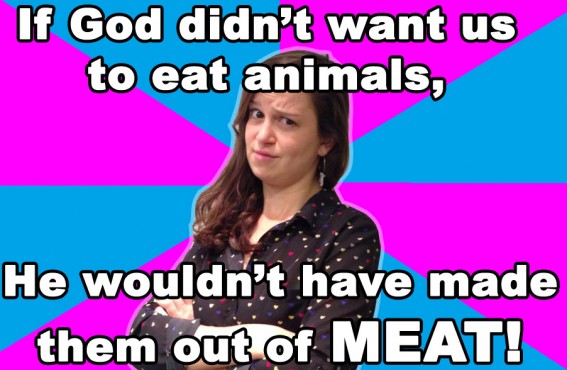 My response when people say, "So you don't believe God gave us the right to eat meat?" is usually to remind them that I personally do not have a moral problem with the majority of meat-eating.  Granted, lots of vegetarians do, but I am not one of them (not yet, at least, hehe).  My reaction when someone pulls the it's-disobeying-God-to-not-eat-meat card, on the other hand… 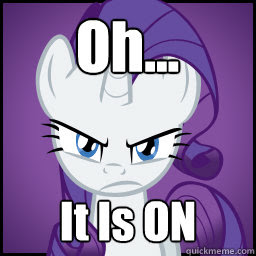 After attempting to cool the blood that has suddenly begun to boil in my veins, I usually say in as calm a voice as I can muster without making it sound as scathing as I really feel, "No, when I think about how vegetarianism was God's first plan for humanity [because it was, you have to admit that], I feel pretty Biblically justified."  Thankfully, people tend to leave it alone after I say that.

"But how do you keep healthy?"
Believe it or not, there are other healthy foods besides fish.  There are other sources of protein than beef.  And there are other victuals that actually offer all eight amino acids.  Shocker, I know. 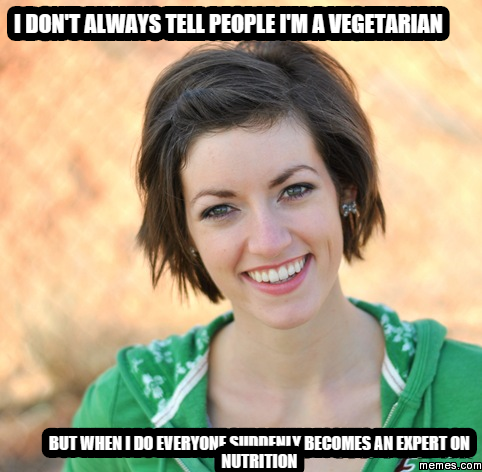 All right, all right.  It is a bit more difficult.  I'm fairly sure I don't get as much protein/amino acids as I should, but that's partially my choice.  For one thing, I don't eat a lot of straight-up dairy either (though I'm not and I doubt I ever will be a vegan).  I can't really have straight milk anymore because it stuffs up my nose.  Which is really sad, by the way, because I loved milk:(  But if/when I try a little harder, I get plenty of nutrition, never fear.  I appreciate the concern, but how's about a deal:  you worry about your health and leave mine to me/my parents/my doctor, okie dokie?  Swell. 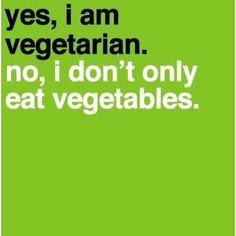 There you have it!:D  Hope I didn't step on too many toes, heehee.  It really wasn't my intention.

Oh, and while I'm here, the lovely Naomi has tagged me!  Jolly big of you, old bean!

1. Describe your eyes, please.  All right!  My eyes are dark brown (though not as dark as they appear from a distance), deep set, and rimmed with naturally long, curly lashes.  (My eyes are basically the only feature about which I can remotely brag, so give me my small victory, haha:D)


2. What's the last thing you bought? (And food doesn't count.)  I'm sure it was a book…I have a problem with compulsively buying books;)

3. Do you keep a diary? (And do you let people read it, or is it filled with dark secrets?)  Nope.  I've tried, but I never keep it up for very long.  Though I think it'd be fun to write a memoir someday, just for the heck of it, and to see how God has worked in my life.

4. If you could choose, have pink hair for a week, or have one encounter with Blandois from 'Little Dorrit' in the night on a lonely road? (For those of you who haven't read or seen Little Dorrit, Blandois is this horrible murderer who turns blood into ice. (not literally.))  WHY NAOMI WHY.  Okay.  My first thought was "Definitely the pink hair!" because Blandois definitely turns my blood to ice and my reaction upon seeing him pop up in front of me with those mad eyes would probably be this:

BUT on second thought, you never explicitly said that I'd meet him ALONE.  If I were to meet him at night on a lonely road when flanked by my brothers and/or my father, I might prefer that to the pink hair.

5. What do you imagine I look like? (I'm curious.)  I'm awful at visualizing people I've never seen;-P  It usually ends up being a very vague outline.  Basically, I picture you kind of like Alexis Bledel in Tuck Everlasting (but that's partly because she was one of your blogger pictures).  And I picture you with curly, slightly frizzy brown hair:)

6. Did you ever believe in Santa Claus?  Uh-uh.

7. When do you allow yourself to start listening to Christmas songs?  Whenever I jolly well want to, thank you very much!  I have my own soul!  My own spark of divine fi-uh!  *stomps away in high dudgeon*

8. Do you have a pair of pink shoes? (Because I think I want them.)  I don't, actually!  I should really get some more shoes, come to think of it.

10. Which literary character can you mimic the best?  Literary or fictional?  'Cause there's a slight difference;-P  Heehee, I actually imitate the shrimp from Shark Tale really well, so my brother tells me. I can basically recite that whole little dialogue with voices;)