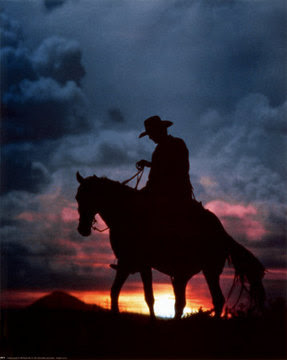 I don't know about y'all, but I have had a BLAST with this thing!  It's been such terrific fun, and I've really enjoyed reading all of your loverly posts.

Before I get too far ahead of myself, though, game answers!

#2:  Character 1:  "Put his boots on him, Clute, and his gunbelt, and his spurs."  The Man Who Shot Liberty Valance, Ransom Stoddard

#5:  Character 1:  "I didn't ride eleven hundred miles to finish second place!"
Character 2:  "Why did ya, then?"  Hidalgo, Frank T. Hopkins and, as Emma dubbed him, Annoying Guy

#6:  (Pardon the language in this one.)
Character 1:  "Are those tears for me?"
Character 2:  "Yes."
Character 1:  "Well, I'll be damned."
Character 2:  "No…I don't think you will."  Okay, so…*sheepishly*  I actually don't know the name of this one…I thought I could find it on the Internet, but…I couldn't, hehe.  It was a movie of which I just caught the last five minutes or so, and I remember the end being really powerful.

#7:  Character 1:  "You know somethin', [Amos]?  The Lord poured your brains in with a teaspoon and somebody jogged His arm!"  The Apple Dumpling Gang, Theodore

#10:  Character 1:  "The truth of God's love is not that He allows bad things to happen.  It's His promise that He'll be there with us when they do."  Love Comes Softly, Clark

Now, then, one last thing:  Don't forget to leave your links at Emma's original post!!!  Others want to read your contributions, too:)

THANK YOU ALL for this experience.