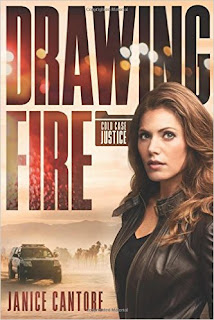 People, an amazing thing has happened.

I liked this one.

I know, right?!  Me, of the snarky opinions on practically all Christian fiction romance!  But 't'is true--I really did enjoy this 'un.  Now, admittedly, that shouldn't have been such a shock to me, since I have enjoyed some CFR before (i. e. Linda Chaikin's Heart of India).  But since it's been rare, I guess it sort of threw me a little.

First things first:  synopsis (taken from the back cover):

With a possible serial killer stalking elderly women in Long Beach, California, homicide detective Abby Hart's best lead is Luke Murphy, an irritating private investigator who saw a suspect flee the scene of the latest homicide.  But as she works with the handsome PI to unravel the serial killer case, she must also confront the spark between them.  When Abby discovers that the most recent victim is related to the governor, she's anxious to talk to him about a cold case that's personal to her, one Luke is interested in as well.

As she learns more about the restaurant fire that took her parents' lives years ago, Abby discovers why Luke is so invested in finding the ones responsible.  With everyone else telling her to walk away from this case, Abby and Luke search for evidence buried beneath years of deceit…and soon realize that someone will do anything to make sure this case remains cold.

Now, I don't read criminal stories.  I just don't.  I don't really watch them, either, because to be honest they disconcert me too much--I realize that these things actually happen, and that makes it a heck of a lot scarier to me than say, Shelob *ahem*.  I'll admit, this story took awhile to grow on me, but by the time the second half rolled around, I was drawn in.  Part of that, I think, was due to the fact that the story wasn't centered around the romance *"Hallelujah" chorus*  There were the typical stomach-flutterings and banishing-of-annoying-thoughts-of-attraction, but Abby and Luke were mainly drawn together by their mutual interest in the case, so every other page wasn't dripping with the allure of her eyes or the strength of his muscles, if you get my drift.  (That did happen a leetle at first, but it got better as the story progressed.)

The characters were all well-done (Ethan is p'raps a little stereotyped, but mayhap that'll change), and Abby and Luke's relationship, though at first not my favorite, ended up being soooo sweet.  That ending, though…  I was happy, particularly because they didn't even kiss!

I know, right?!  In a CFR book, the hero and heroine didn't kiss!  (Well, okay, she kissed his cheek on the last page, and I'm pretty sure they'll kiss eventually in one of the other books, but you know what I mean.)  It's really quite ridiculous how ecstatic this makes me.  Understand, now, I have no real Biblical objection to a couple kissing prior to marriage (though I understand that some of you may and I completely respect your conviction!), but…well, let's just say, if you've read a lot of CFR, you're pretty happy when an author finds it within her capabilities to craft an engaging relationship without constant fantasizing and/or kissing.  It's just nice, hehe.

The writing wasn't absolutely flooring, but it was "adequate" (wow, how much more condescending can I get?), and improved the more I read (I liked the reference to Casablanca as a comfort sort of movie;D).  Plus, the story definitely made up for any slight deficiencies.  Speaking of which…

Peeps!  There's a sequel!  'T'is a series (which I really should have picked up on earlier), and I have to say, by the time I got to the last page and realized it was the last page, I felt cheated.  "Wait--what?  How--what just happened?"  BUT then I turned the page…and saw the advertisement for the sequel, and suddenly all was well again;)  I can honestly tell you all that I am looking forward to the release of the second installment (and very much hoping it'll become available for free review on one of the sites!).  In fact, when I finished and found out that the next chapter wouldn't be coming until 2016, I got that antsy, "but I want it now" feeling--which in turn delighted me, because I realized how much I'd  become invested in the lives of the characters.  I actually sort of walked around in a happy daze for a little while afterwards.

So, in closing, yes, I liked it!  It was a good story, and I'm greatly anticipating the next segment!

[I received a complimentary copy of this book from Tyndale Publishers in exchange for my honest review.]

books Lord of the Rings