I'm doing another one of those convoluted comparison posts (see previous ones here and here), this time about the Western True Grit.  I've now seen both the most recent movie adaptation (2010 with Jeff Bridges) and the original classic film (1969 with John Wayne), and I've read the book by Charles Portis.  Let the competition begin;)

I watched the 2010 film version before I watched the 1969 or read the book, so my judgement and reasoning will probably clouded slightly by the fact that the 2010 was, for me, first come, first serve. 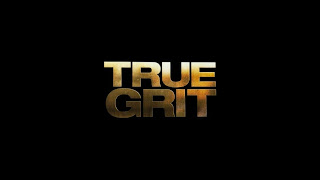 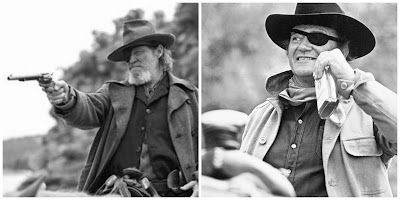 I think John Wayne immortalized Rooster for many people, so Jeff Bridges had a tough act to follow.  Personally, I think he followed it quite well.

Of all the elements of the three different versions I'm discussing, the respective portrayals of Rooster were probably the things I liked most equally (if that makes any sense).  Both Wayne and Bridges were great in the role.  John Wayne brought out more toughness and sardonicism, in my opinion, while Jeff Bridges brought out more bumbling and vulnerability.  All those characteristics seem to be proponents of Rooster's character in the book, so I'd say that I like both interpretations almost equally, but with 2010 possibly edging out just the leetlest bit. 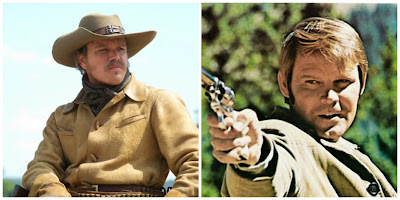 This one is a bit tough.  I like Matt Damon's portrayal better, but Glen Campbell's seemed almost more faithful to the book--which is a sad thing, if you think about it, because then one has to concede that book-LaBoeuf is sillier.  Ah, well.  I don't know.  It's not that I necessarily disliked Glen Campbell's version, but he was weirdly flirtatious and kept making moony eyes at Kim Darby's Mattie (Mattie reciprocated, though, so they're both penalized, hehe).  I can't quite decide if I ship LaBoeuf and Mattie or not.  I never really thought about it until my second or third viewing of the 2010 movie, and then I was confused.  'Cause, you see, there seems to be a slight--key word, slight--attraction between the two of them in the 2010, too, but it doesn't seem ridiculously sappy and irritating, which is more than I could say for the 1969.  But anyway.  Rambling now. 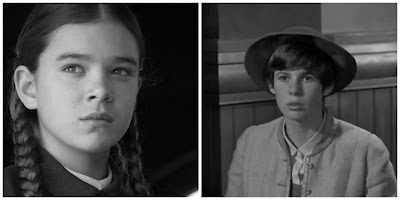 I like Hailee Steinfeld's portrayal better.  I'm sorry, people, but it's hardly a contest.  Kim Darby was just irritating as heck, and her hair bugged me to no end (I'm sorry, guys, but I don't think I've met a person who pulled of that hairstyle in an attractive way.  They may exist but I have yet to encounter them).

*sigh*  Okay, okay, by the end Kim Darby had grown on me a little, but just a very little.  I think that overall, she was more whiny than book-Mattie is, BUT, unfortunately, that scene where she throws her temper tantrum over the possibility of Chaney hanging in Texas as opposed to Fort Smith and storms out of her confrontation with LaBoeuf and Rooster IS in the book (it's in the 2010 version, too, but it takes place under different circumstances, and Mattie does not stamp her foot and run out).  Which is a shame, because it seems so immature and, frankly, rather unChristian *prim voice*  I mean, there's nothing worse than revenge denied, right?  Yes, I said revenge.  I realize that Mattie's quest is a quest for justice, but…you have to admit, there is a fair sprinkling of revenge mixed in with it.  Of course, that is COMPLETELY understandably, but the fact remains.  And, ya know, revenge sort of runs contrary to God's Word…anywho.  Rambling again!

Hailee Steinfeld, on the other hand, managed to be sweeter and more adult during the whole story, which is very nice. 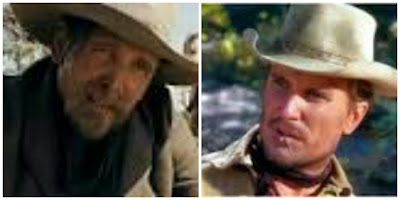 WHY WAS ROBERT DUVALL NED PEPPER?!  The pain!  Of course, like most movie greats, he probably had to play the occasional "bad guy," but--but--but he's Hub!  And Print and…ah, well.

Actually, as villains go, I suppose Ned Pepper is a fairly good one for Bobby (yes, I called him Bobby, don't judge) to portray.  At least there is a shred--the faintest shred--of decency in him.  "He don't kill people for no reason."  And he makes at least a halfhearted attempt to protect Mattie.

Surprisingly, then, I think I actually prefer the 1969 on this one. 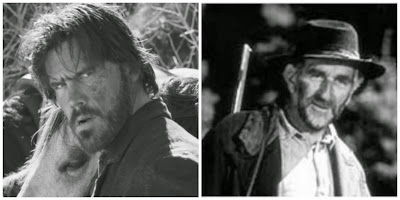 The MUSIC for the 2010, though!  OH. MY. WORD.  The main theme is "Leaning On the Everlasting Arms," and--squee!--I can actually play the beginning of the movie on the piano! :D

LaBoeuf actually dies in the 1969 movie, which isn't in the book, so that was a little sad, even though I wasn't all that emotionally invested in his character in the 1969.

I think both movies were remarkably true to the book, but in different ways, for which I applaud the makers.  Overall, though,  I'd have to say I prefer the 2010 movie version, mostly because I prefer the cast, the music, and the way in which it was filmed to those of the 1969 (with the exception of John Wayne, Robert Duvall, and the ending).

How about you all?