Until the Harvest by Sarah Loudin Thomas {review} 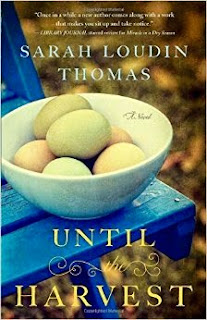 A number of days ago, I received my first free book from Bethany House as part of their blogger review program.  I was quite excited:D

The book I received was Until the Harvest, a novel by Sarah Loudin Thomas.  I will admit that my expectations were not exactly high, since, after all, it is a part of that dreaded genre, "Christian fiction romance."  (And y'all, I have some tales to tell thereabout.)

However, while I can't say that UtH was exactly soul-stirring, there was a sweetness and unpretentiousness about it that was refreshing.

[SUMMARY FROM THE COVER]
When family tragedy derails Henry Phillips's college studies, he's left unmoored and feeling abandoned.  The only things that can tamp down his grief are the family farm, his fiddle, and an unexpected relationship with sweet but unusual preteen Mayfair Hoffman.

Unfortunately, Mayfair's older sister, Margaret, despite her spray of freckles and cute, up-turned nose, has a completely different effect.  His grandmother's caretaker, Margaret is always around, ready to push his buttons, and it seems at first that she doesn't care about his troubles.

Henry soon realizes, though, that Margaret's facing her own struggles.  Mayfair's health and unique gift sir at the heart of those worries.  Henry and Margaret soon find themselves relying on each other as potential tragedy collides with growing hope in a warm story of family bonds and the surprising way healing finds us all.

Overall, I'd say that I quite enjoyed this book.  The prose isn't always as deep or colorful as I'd like, but it is simple and fresh, which is sometimes just as good.  And there were several times in the book that I giggled or laughed aloud, because Ms. Thomas would throw in a delightful little surprise of a turn-of-phrase.  Here are some of my favorite amusing lines:

~ "He peered out and saw that Margaret was absorbed in wiping down the walls, floor to ceiling.  He rolled his eyes.  Cleaning walls - women."

~ "Frank took his wife's hand.  'We men get things wrong sometimes, so you ladies can feel superior.'"

~ "Henry thought he'd feel tougher if he were wearing pants."

~ "Angie made an exasperated sound.  'The question is, does she want to marry you?  I swear, you men think you can just decide things and women will go right along with it.'"

~ "Henry was washing a bite of bread down with milk, and he snorted the liquid into his nose...'I'm sorry, Henry.  I should have waited till you swallowed.'  'Why?  You waited twenty years, what's thirty more seconds?'"

If it's any indication of its goodness, I finished the book in approximately a day (and I typically move through books rather slowly), so…

The plot meanders along (but in a good way), and it's basically a sweet, wholesome story of farm life.  It's set in the mid 1970s, but honestly, I forgot that for the majority of the time, only really remembering it when there was sudden reference to Tab soda or Twiggy or a direct mention of the date.

The characters were mostly very realistic, which I greatly appreciated, as was the fact that Margaret wasn't described as a drop-dead-gorgeous beauty.  However, the relationship between Henry and Margaret…well, I honestly really enjoyed it, but…it seemed at times to be basically describing two teenagers trying to deny a crush on each other.  Not that's necessarily a bad thing, but - I just can't decide.

As with most books in the CFR genre, there were a few cheesy parts, but unlike most CFR books, those parts were few and far between.  I wish they had been wholly left out, but overall, I applaud Ms. Thomas for managing to create a story that was sweet without being hopelessly trite.

One of my brothers has diabetes, so it was interesting to have a character like Mayfair (who, I might add, was also a great presence, because she helped to prevent the story from becoming yet another boy-meets-girl-and-boom-they're-made-for-each-other tale).  Oh, and I loved the references to Anne of Green Gables and Little House in the Big Woods.  They made my inner bookworm smile:)

However, one part that slightly rankled me was when one character was explaining to the others about how she'd been assisting a friend during labor, and how, as a young and naïve girl, she hadn't realized "how horribly wrong things could go with a home birth."  Now, speaking as the daughter of a woman who birthed five of her six children at home (moreover, three of them, including I myself, were breach babies), I wished to have some sort of qualifier at that point.  Yes, things can go "horribly wrong" with home births, but then again, women managed it for centuries.  Not at all bashing hospital births, but I'd like fair representation for home births, too.  Okay, rant over;)

So, overall, I was surprised by how much I liked this book.  It wasn't, as I said, stunning or epic or anything like that, but then, it didn't try to be, either.  It just tried--and succeeded, in my opinion--to be a simple, heartfelt story with an almost inexplicable charm.  It was refreshing and warm-hearted and one that I think I shall probably read again.  Yay!