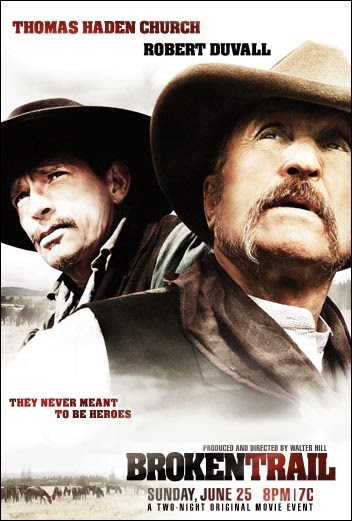 Wow.  This movie.  I first watched it about a month ago, and loved it.  I finished it for the second time last night after showing it to my parents.  (It was even better the second time around.)

I'll probably just be gushing about Tom the awesome characters for this entire review, but…stay with me.

The story is about a semi-estranged uncle and nephew, Prentice (Print) Ritter, played by Robert Duvall, and Tom Harte (Thomas Haden Church).  On route to deliver a herd of horses, the two (and a friend they meet along the way, Heck Gilpin) encounter a sleazy slime ball (sorry.  that was just way too much fun to resist) who's been recruited to deliver five Chinese girls to a saloon in Idaho.  "Through a series of circumstances," as Tom says, they take the guardianship of these abused girls upon themselves, while still trying to carry through for their client.  Unbeknownst (for most of the movie) to them, another sinister man has been recruited by the same lady who "bought" the "Orientals" to track them down, as they are long past due.  (Oh, back track:  they actually pass through the town in Idaho - a harrowing scene, by the way - and on their speedy way back out another person is added to their little party - Nola Johns, a middle-aged prostitute trying to escape said sinister man, who had abused her in the past, and whom she had given up to the police.  Whew!  Okay, okay, I know I'm not good at explaining movies, but it's a bit complicated.) 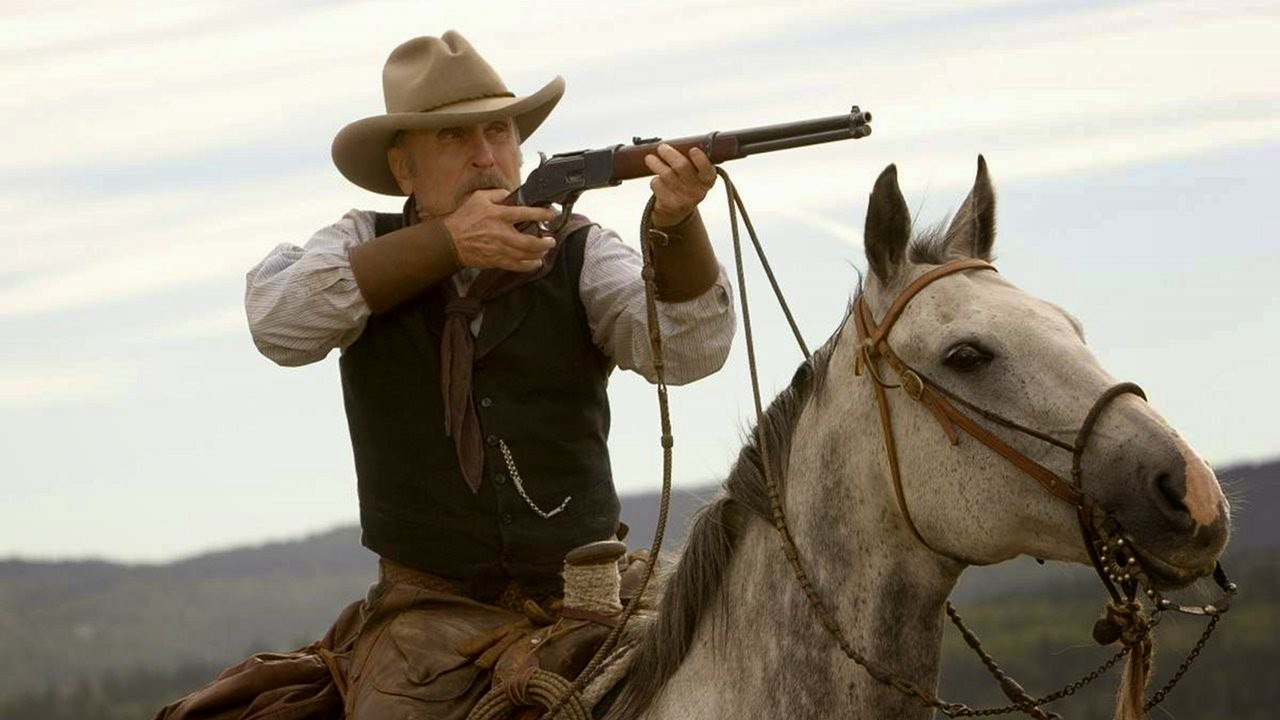 The one and only Robert Duvall as Print Ritter

Print is wonderful (when has Robert Duvall played a not-wonderful character, though?  Except for in Lonesome Dove.  I didn't really like him in that one, though to be fair I haven't finished that movie.  But really?  In Broken Trail, he refuses to touch those trapped in prostitution, and in Lonesome Dove, he literally can't stop talking and thinking about them.  Ugh).  I love Print's optimism, and his relationship with "little number 5" is adorable.  I don't know how I feel about the whole Print/Nola thing, so to be honest that aspect of the ending is still a little…I can't decide.  I mean, it's bittersweet in some ways, but in others…everything that absolutely had to happen in that ending did;)  Also, Print's trying to "right some family wrongs" is admirable.  And he's protective and brave and doesn't flinch when Ed Bywaters is threatening to - um…do unkind things.  When he almost spits out the Lord's Prayer at him…I love it.  'T'is great.

Favorite Print lines:
~ "Never use money to measure wealth, son."
~ "Ain't nobody made it out here with out some divine luck attached."
~ Tom:  "Her name's Sun Fu."  Print:  "I know what her name is!"
~ "I didn't ride in on a turnip-wagon, mister!"
~ "Nephew…"
~ "We're all travelers in this world…birth 'til death, we travel between the eternities."

*sigh*  Tom.  I love Tom.  He's awesome (be prepared - that word will be excessively overused in connection with this movie in general).  I'd seen Thomas Haden Church in We Bought a Zoo, and loved him in that (because, really?  "I have arrived at a thought."), but when I first watched Broken Trail, I was a little apprehensive at first about whether or not I was going to like him.  I think it's the way he talks - in a bit of a monotone.  You get used to it after a while, and it even gets humorous, but at first it's a little off-putting.  About a fourth of the way into the first part (in comes in two parts, so do not freak out when the first segment ends.  There's another one, I promise), he had completely won me over.  I think it was when he's sitting up all night with Mai Ling (Number 2) when she's *SPOILERS* dying of "tick fever" *END OF SPOILERS*  How he's just sitting there, holding her hand and generally being sweet and awesome.  *ahem*  He's pretty hard, emotionally walled up, and a bit impatient, but he has reasons for his walls.  And those rare moments when you can glimpse his wry sense of humor are great:D 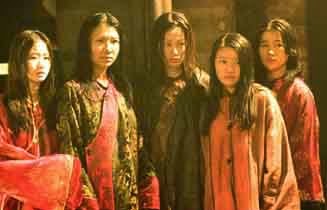 The girls were all acted extremely well.  Even those who didn't have a big role in the film took their part seriously, and that's cool.  Your heart breaks for these girls several times over the course of the movie, but especially for Ye Fung (Number 4). *groan* (But, okay, isn't it a leetle unrealistic that she was the one constantly singled out to be raped?  I mean, I'm glad the others weren't, but sometimes you were just sitting there thinking, "How many times must this happen to this poor, precious child?!")  My favorite of the girls is probably either Mai Ling, Gin Wa (little number 5), or Sun Fu.

I think this would be a good place to insert a warning.  This is a Western, and most Westerns are brutal in some way, but this one has a good bit of sexual brutality in it.  So watch with care.  It isn't rated, but I have a feeling that if it were, it might be R.  It isn't a very pretty film.  But honestly, one of the things I appreciate about this movie is the tough honesty.  It deals with human trafficking, and it doesn't mince words or sugarcoat anything, and I mean anything.  (Well, there is that one "merciful break" with Ed and Nola, but other than that, I mean…)  The filmmakers portray human trafficking for what it is - inhuman, terrifying, and brutal.  The opening scene is basically a brothel, with a prospective buyer (the sleazy slime ball - his name is Billy Fender) selecting five girls (above picture).  There is some female nudity in that scene, as well as implied inspection of the girls' bodies.  There is a rape scene in the movie, and while it is interrupted (Heck and Tom to the rescue!), that doesn't happen until after you see that Ye Fung is being assaulted over and over.  As a matter of fact, though, that's one of my favorite scenes, because it's Tom at his best, in my opinion.  (When he comes and shoots the guy's thumbs off - I know, I know, that sounds awful, but you'd have to see it in perspective - I love it, actually.)  Another amazing scene is the one on the ranch when Ed and his gang show up, and Tom rides in and rescues everyone.  *angel chorus* 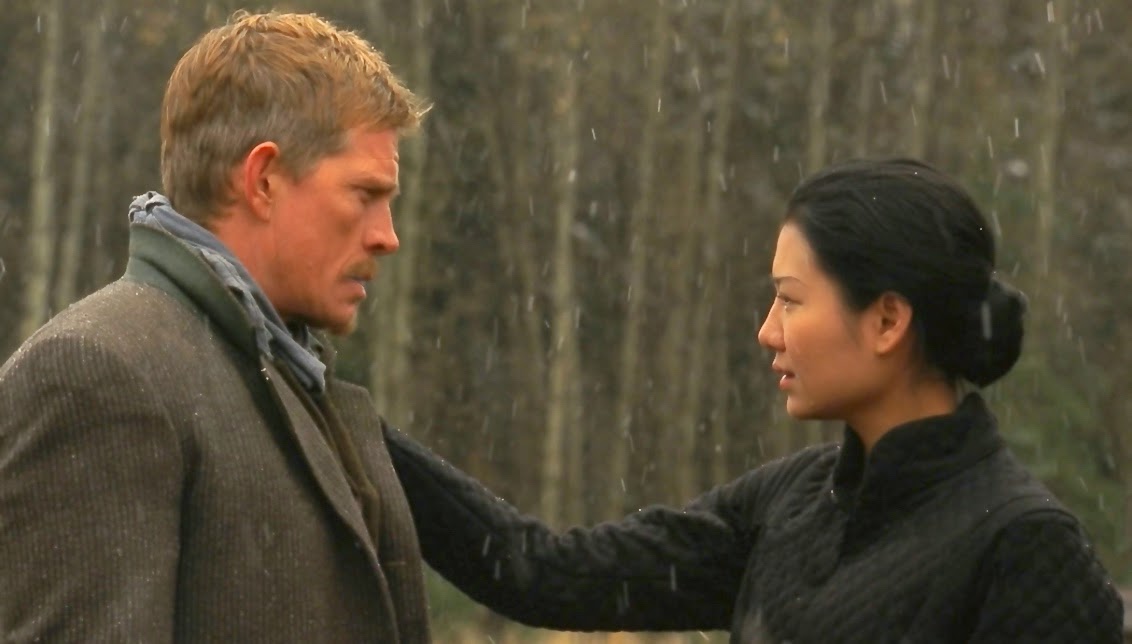 Seriously, though.  Their relationship.  How she slowly breaks him out of his years of fortifying his emotions…*teenage fangirly sigh*  That scene picture above - okay, for a couple minutes there (I wasn't scared!  Well, maybe I was a little bit concerned, but it's not the same thing)…whew.  I'm glad they got that right.  If they hadn't…this might have been a very different review.  *SPOILERS*  I was so scared she was actually going to leave.  And he was actually letting her!  Tom!  Wake up!  Thankfully, though, she stayed.  And how we can see just the hint of a smile when he sees her…oh my goodness… *END OF SPOILERS*

First off, it's not sad.  It's not.  It's even happy in many ways.  But it's not completely satisfactory.  It's real, though.  I just don't want to give everyone the impression that it's a sunshine-and-roses ending.  Some of it is (Tom and Sun Fu!!!) , but some of it isn't.  It's great, and I liked it better the second time around, but…depending on your view of a couple things, you might be dissatisfied.  But you should watch it anyway.  Anywho.

Also, quite a few main(ish) characters die over the course of the story.  I mean, you won't be completely devastated (well…unless a certain person is your favorite…), but it is heartbreaking in certain ways.

Okay, I need to stop rambling.

My bottom line is, I loved this movie.  And you should watch it.  It's brutal, but it's also beautiful.