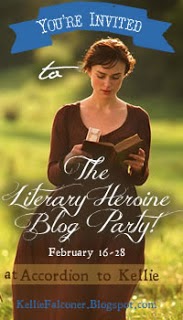 It was so hard to choose from the buttons she provided!!

I was alerted to the fact that this fun little shindig was going on over at Naomi's blog (read her answers to the questionnaire here).  I'm thrilled to be participating!

Here are my answers to the questions Kellie is asking:

(Oh, and a note:  I'm going to try my very best to refrain from mentioning LotR people in the character questions.  Aren't you proud of me?)

1.  Introduce yourself!  Divulge your life's vision, likes, dislikes, aspirations, or something completely random!  Okie dokie!  Hi, I'd love it if you called me Arwen (Arwen is a perfectly elegant name xD ).  I'm a girl totally and completely in love with stories in any form.  I'm also -- infinitely more important -- a Christian, muddling through life with an unfailingly patient and loving Guide!;)  As I said, stories in any way--particularly historical fiction, legends, and a little bit of fantasy.  Dislikes?  Hmm.  I have very strong words to say to certain fictional characters, I guess you could say.  Random:  The desktop picture on our family computer is Robert Duvall playing Prentice Ritter from Broken Trail…a movie with which I happen to be hopelessly in love.

2.  What, to you, forms the essence of a true heroine?  Well, as Naomi mentioned, having a heart that's "in the right place" is paramount.  Also, I'd say, a heroine is not perfect (did you hear that, Martha Finley?  Ha.  We'll get to you later)--she is flawed, but she recognizes her mistakes and strives to right them.  Also, a certain independence of spirit would be desirable.

3.  Share (up to) four heroines of literature that you most admire and relate to.  Sheesh.  Okay, I'll try.  Rebecca from Ivanhoe, Molly Gibson from Wives and Daughters, Rose Campell from Rose in Bloom, and Jane Eyre from Jane Eyre.  There are many, many others, needless to say, but these are a few that I particularly admire.  Rebecca because…Rebecca.  I mean, talk about strength of will and courage!  Whew.  Molly Gibson is special to me because she's such a sweetheart, but she's not a wimp, and she doesn't let people walk all over her, like some *ahem* heroines I could mention.  Plus, I have an inkling that I'm a little like her in some ways, which makes me beyond happy:D  Rose is just a lovely role model--she makes mistakes, but she learns from them.  I think she's probably the most relatable for most of us Christian young women.  And then, Jane, because…again, strength.  If I were to try to sum up her character in two words, they'd probably be "quietly indomitable."  I could go into that more, but at the moment I'm not going to, for time's sake.

5.  Out of those five books who is your favorite major character and why?  That's tough…I'd have to go with either Hattie Brooks or Rudy Steiner *SOB*

6.  Out of those five books who is your favorite secondary character and why?  Perhaps Chase Mueller, from Hattie Big Sky.  I love Chase; he's so adorable:D

7.  If you were to plan out your dream vacation, where would you travel to - and what would you plan to do there?  There's this cabin that we've visited once before, and that was quite enjoyable.  It was a bit big to be classified as a cabin, but the idea was the same;)  I might choose to go back there for a while, and explore some of the surrounding area.  If we're talking internationally…New Zealand.  (Oops, I brought up LotR!)  Alaska would be fun to visit, as well.  I'd absolutely love to see the Northern Lights.  Oh, and Prince Edward Island, of course!

9.  You have been invited to perform at the local charity concert.  Singing, comedy, recitation, tap dancing…What is your act comprised of?  I'd like to do something in a group, most likely--probably singing, comedy, or acting.  Perhaps the piano.  I'd just have to see:D

10.  If you were to attend a party where each guest was to portray a heroine of literature, who would you select to represent?  Probably Molly Gibson.

12.  In which century were most of the books you read written?  I think the majority of the books I read were written either in the 19th or the early 20th centuries.

13.  In your opinion, the ultimate hero in all literature is… *Arwen's fingers itch to type out the name, but she restrains herself*  Since I've said I won't bring LotR characters into this, I'll have to think on it for a while.  *chews imaginary pencil*  I love, as you all know, John Thornton, but is he quite the ultimate hero in my opinion?  Hmm.  I can't decide, but I'll mention a few candidates:
~ Rudy Steiner
~ Mac Campbell
~ Allan Woodcourt
~ Jace Buckley

14.  In your opinion, the most dastardly villain of all literature is… Ha.  Ha, ha.  Horace Dinsmore, Jr. (don't even get me started…), those people in Ivanhoe (NOT Brian Bois-Guilbert), Roger Chillingworth (I kind of like him, but he is pretty dastardly), etc. and so on…Oh, OH!  Madame Defarge.  I. Hate. That. Woman.

15.  Describe your ideal dwelling place.  I'm not that particular…but nice cottage are, of course, wonderful:D  I mean, the kinds that are old-fashioned on the outside, but renovated with certain modern conveniences, like electricity.

16.  Sum up your fashion style in a short sentence.  Give me comfort, or give me death!  Ha, no, not quite that extreme, but to be honest, my first concern with clothing (other than ensuring that it's modest, of course) is comfort and wearability.

17.  Three favorite Non-fiction books?  Other than the Bible, I assume?  Mere Christianity, Perfectly Unique, and The Hiding Place, I suppose.

18.  Your duties met for the day, how would you choose to spend a carefree summer day?  Reading, catching up with the blogosphere, movies/tv show…maybe going outside for a little walkabout.  Maybe shopping.

19.  Create a verbal sketch of your dream hat - in such a way as will best portray your true character.  I'm not at the pleasure of understanding you a bit confused, but…I like beanie hats, truthfully;)

20.  Share the most significant event(s) that have marked your life in the past year.  A couple different events, but they are of such a nature that I should rather not disclose them here.  For security reasons, and such.  Oh, but I made my blog public!  That was big, and it's opened doors for me to meet so many wonderful peeps. *smiles and hugs all the Internet buddies*

21.  Share the Bible passage(s) that have been most inspiring to you recently.  Verses about God's faithfulness and protection; Jeremiah 29:11; Psalm 34; etc.

Well, that was quite fun!  Thanks, Kellie, for hosting!:D